The Trial of the Chicago 7 heads to Netflix 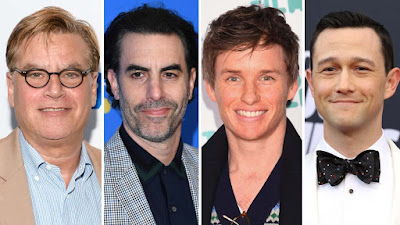 Netflix has secured the global rights to THE TRIAL OF THE CHICAGO 7
for an estimated $56M. Paramount was previously the domestic distributor
and the film was due for theatrical release in a host of international markets
but the coronavirus wrecked that plan.
The film had been due for domestic release at the end of September.
It now lines up as another potential awards contender for Netflix.
Release date has not been set but it’s likely to be on the platform
before the November election.
sources: deadline.com, @NextBestPicture @PopCultureRevs
One of the most interesting things for me is the relationship between
Tom Hayden (Eddie Redmayne) and Abbie Hoffman (Sacha Baron Cohen).
They hated each-other at the beginning, and ended up after the trial
like brothers. Eddie plays Tom, who in a climactic scene, blows up
when Abbie  asks him, “What’s your problem with me?” Tom says:
"My problem is, that for the next 50 years, when people think of
progressive politics, they're going to think of you. They're going to think
of you and your idiot followers passing out daisies to soldiers and trying
to levitate the Pentagon. They're not going to think of equality or justice,
they're not going to think of education or poverty or progress. They're
going to think of a bunch of stoned, lost, disrespectful, foul-mouthed,
lawless losers. And so we'll lose elections." (source: nytimes)
Posted by Jutka at 11:16 PM