Eddie in Kitzbühel Austria for the Audi Snow Experience

Eddie is in Kitzbühel Austria for the Audi Snow Experience (January 24-26, 2020) during
Hahnenkamm-Race-Weekend. Eddie is a brand ambassador for Audi UK, This is not the first
time he visits this beautiful ski paradise, he was here as a guest of honour of Audi in 2017. 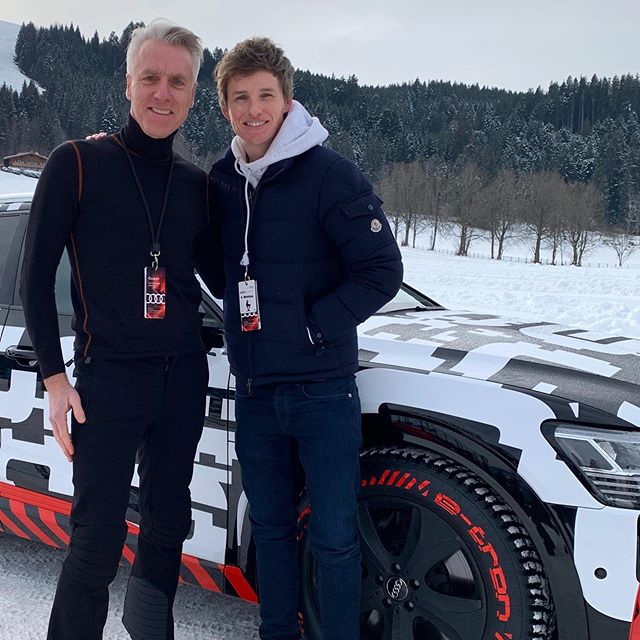 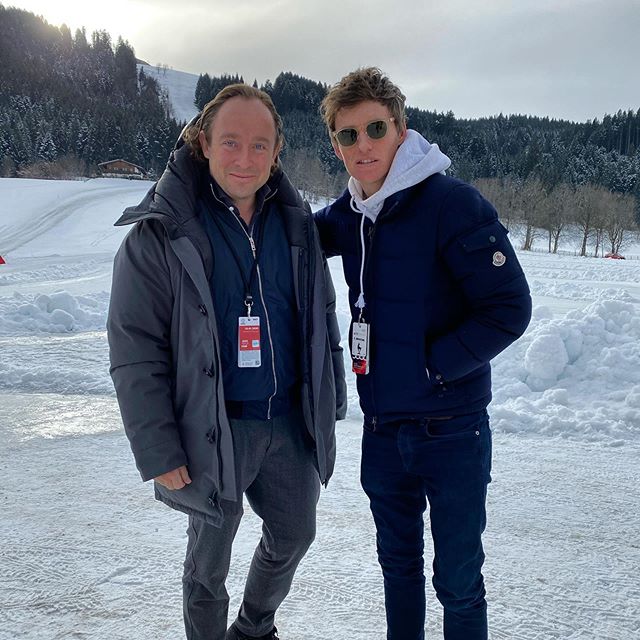 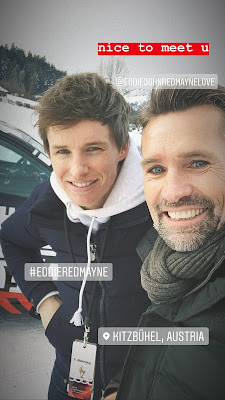 A selfie from the IG story of Stefan Bösl @stefanboesl (x)

Year after year, some 100,000 spectators flock to Kitzbühel to watch the men’s competitions
in Super G, slalom and of course on the awe-inspiring “Streif” downhill course. Audi has now
been supporting the season’s pinnacle event in Austria as well as the entire Audi FIS Ski
World Cup as a partner and its title sponsor for nearly two decades. This year, the Audi e-tron,
the brand’s first fully electric model played a starring role at the event... the e-tron, in addition
to other models, was also deployed at the Audi driving experience in nearby Kirchberg.
For this purpose, the complex, which is home to an off-road park and a slalom course,
was equipped with a mobile charging station for the first time. (source) 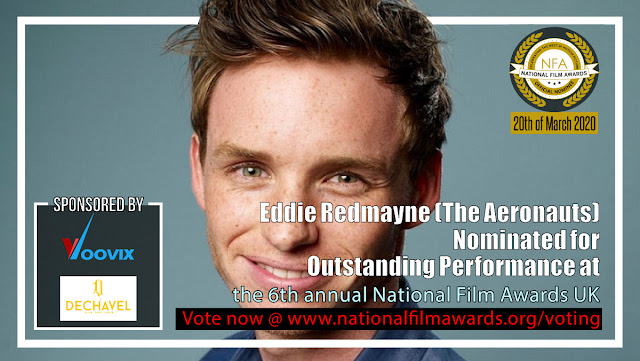 Eddie Redmayne nominated for the 2020 National Film Awards UK in the
Outstanding Performance and The Aeronauts in the Best Action category. 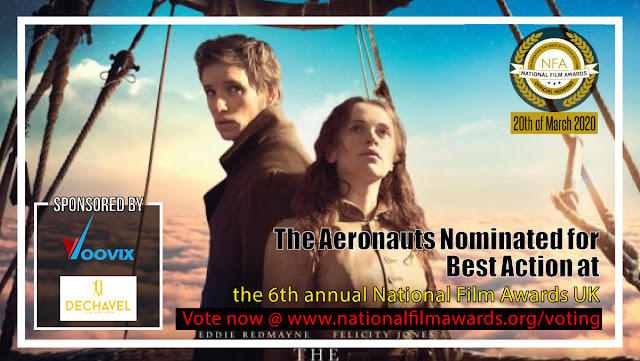 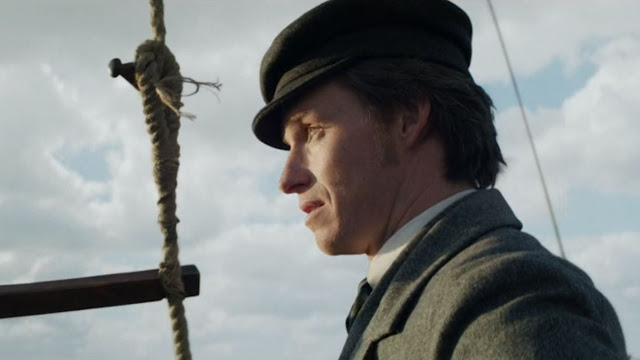 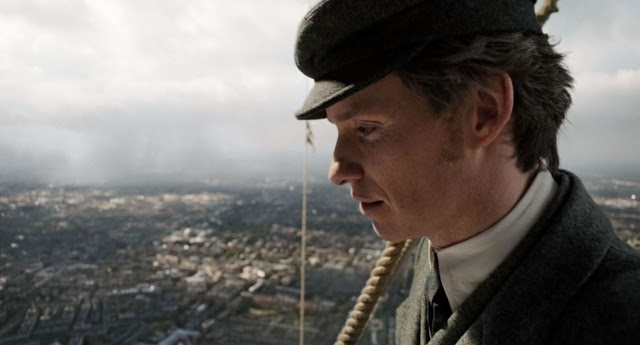 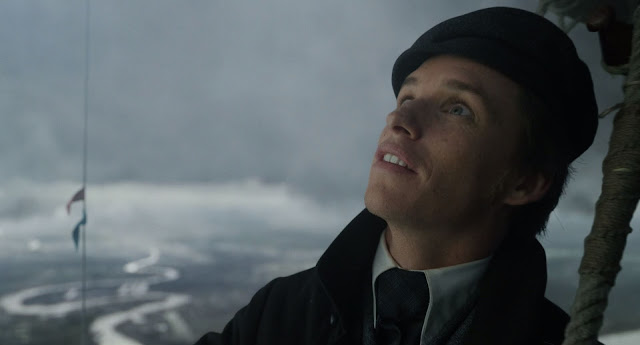 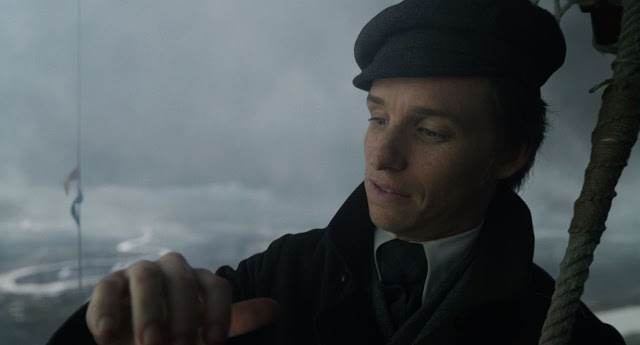 “Mr. Glaisher, you are airborne for the first time in your life, I suggest you spend
less time frowning at me and more taking in this beautiful world we’ve just left.”
The Aeronauts screenplay by Jack Thorne 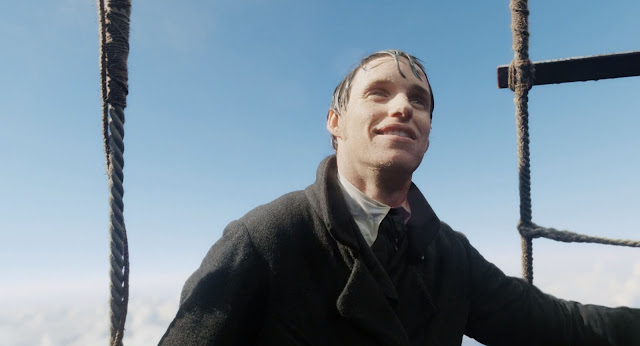 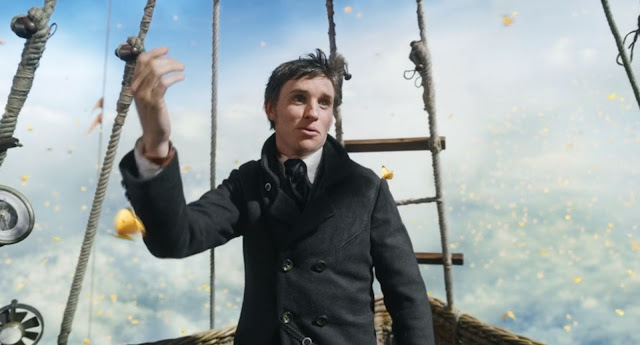 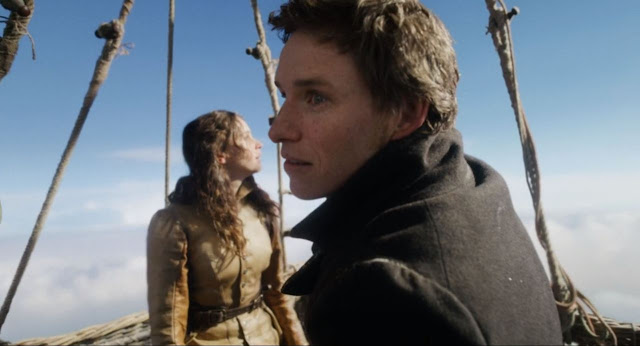 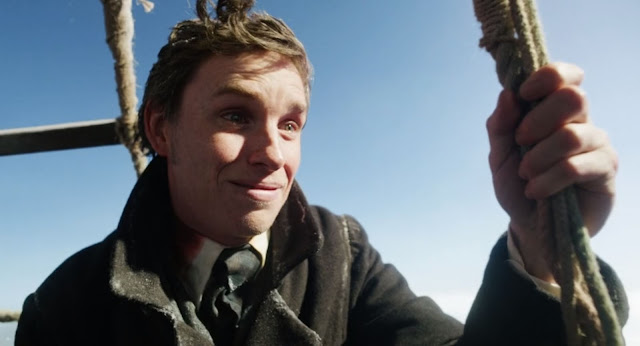 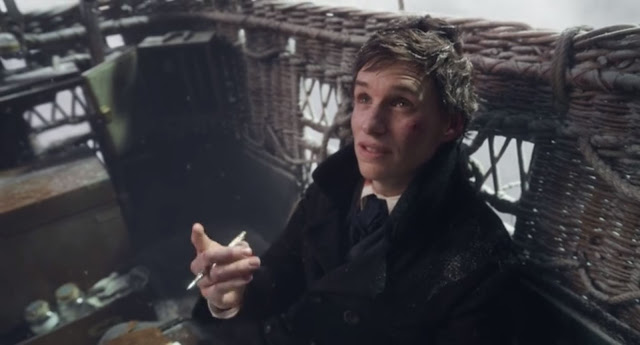 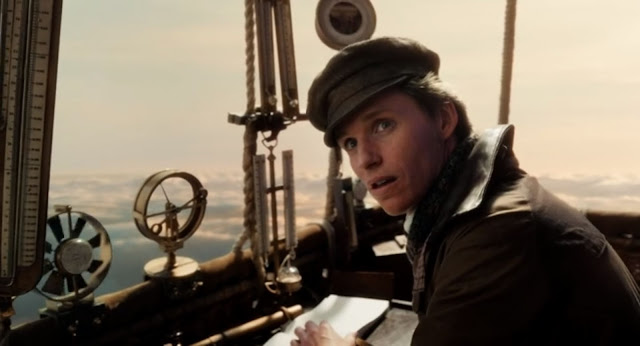 Check out my movie screenshots here
(300+)

Email ThisBlogThis!Share to TwitterShare to FacebookShare to Pinterest
Labels: Aeronauts

Actually Me, Eddie goes undercover on the Internet

On this episode of GQ's Actually Me, Eddie Redmayne goes undercover on the
Internet and responds to real comments from Reddit, YouTube, Twitter and more.
Why are British gentlemen so charming? What is his method of acting? 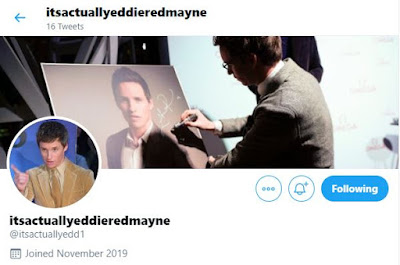 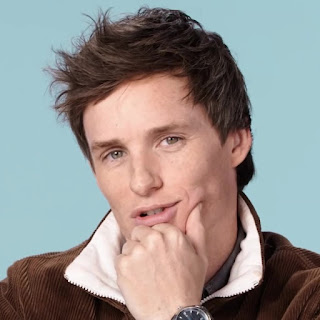 dilara elbir @elbirdilara: You know what's missing in CATS?
Eddie Redmayne and Helena Bonham Carter.
I feel that I don't have a good enough figure for Cats. And I've watched the new Cats trailer the other day, and Idris Elba just looked so ripped as a cat and I feel like that was probably why
I didn't get the call from Tom Hooper. But I'm not taking it personally at all.

𝒃𝑬𝑳 @filmeraki: I need a movie where the big 3 british in it. Benedict Curcumaplus, Eddie Redmayne, and Tom Hiddleston.
A war movie would be cool. Or a classical movie like Three Musketeers. OR maybe a new James Bond movie, Tom as Bond, Eddie as the villain, Ben as MI6 new boss?
That's quite a pitch. I like the idea of Benedict Curcumaplus. Why does Ben get a cool surname and Tom and I don't? I also quite like the idea of the Three Musketeers. If that happens, do you think that @filmeraki gets a commission? Let's put that out into the ether. Three Musketeers. That's good. Except I can't grow facial hair. 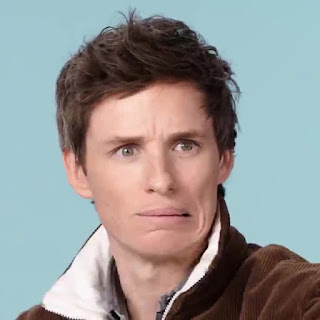 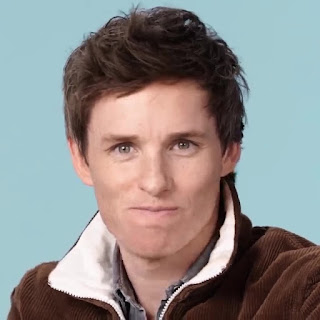 I think…I mean, I would say yes. I would love to work with Felicity Jones. In this film, literally we were confined to a basket about the size of this table for about three months, and we loved each other at the end anyway.
— itsactuallyeddieredmayne (@itsactuallyedd1) November 29, 2019

So, I think that's a testament to extreme work conditions and true friendship. But also what happened with this film is we got to the end of filming and we were sitting in the basket covered in rain and frostbite and snow...
And I said to Felicity, "Hasn't this been such a wonderful experience?" as my character basically gets to pass out for a lot of it and just be quite relaxed. And she said, "No, it's been absolute hell”.
But I take because she basically had to do a load of stunt, brutal, painful work the whole way through the film. I'm trying to take that as not as a personal slight, but I would love to do all my films with Felicity Jones. 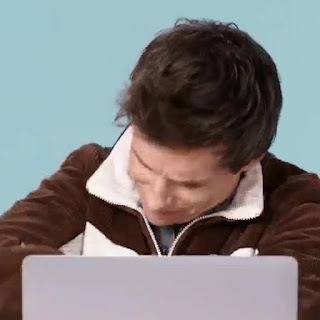 David Low @ydavey: Does anyone know why Eddie Redmayne hasn’t done another musical? He sang so well in the film of Les Miserables.
David, I love you. Thank you for being generous. Not sure everyone agreed with you. There have been reference to me sounding like Kermit the Frog. I enjoyed singing until I saw myself in Les Miserables. A lot of the character in Les Miserables sings really high.
It's too high for my voice, so I spent most of the film doing that, which doesn't look particularly appealing when you're watching a film. And then, when we came to sing live at the Oscars, I asked the composer if there was any chance we could sing it down a tone or two. And he was like, "Yeah, totally." I thought, "Why didn't I ask him that while we were making the movie?" That movie would have been so much less painful for me and for audience members listening to me. Anyway, I would love to do another musical one day. Thanks, David.

On the screenshot above you can read Eddie's comment on the marked fact. Fortunately, it's
documented in the video because someone deleted it from the site. This is true for the next one too. 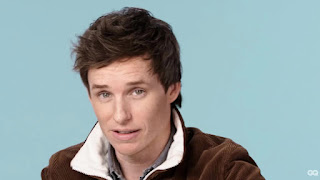 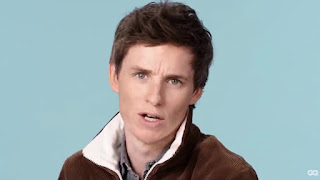 "I think it was Kylo Ren that I was auditioning for. The reason the audition was horrible
was because I was doing my Jupiter Ascending voice because I've only got one Sci-Fi
villain in me, and that one wasn't very successful. Adam Driver got the part, which
was great for not only the Star Wars universe but the universe generally."

"That is totally true. In fact, I think they stopped the audition before I even finished
saying the line. That was a scaring moment. Thanks for bringing it up."

"This is true. We used to go to LA in January to get out of London to try and get
work in pilot season. And the actual reality is it was just pouring with rain in
London and so we would tell all our family   and friends that we had to go and
look for work in Los Angeles."

"This is true. This happened a while back and I didn't really know how to respond
to the entire situation, so I do what I generally do, which is, bodily functions
take over and I just went beet red."

With all the traveling and different accents and characters you get into -- I wonder,
what is the most British thing that's synonymous with being back home for you Eddie?
Eddie Redmayne: My love of Marmite, salt and vinegar squares and Discos.
Two snacks that are quite English and the packaging hasn't really changed since
the '80s. When I get back to Heathrow, I'd always go straight to WH Smith,
which is a newspaper store, and get a packet of salt and vinegar Discos and
salt and vinegar squares and then I feel like I'm at home.
(I don't know if he reads it or not, but I replied to his comment.)


Watch the video at the top for more

Email ThisBlogThis!Share to TwitterShare to FacebookShare to Pinterest
Labels: promo 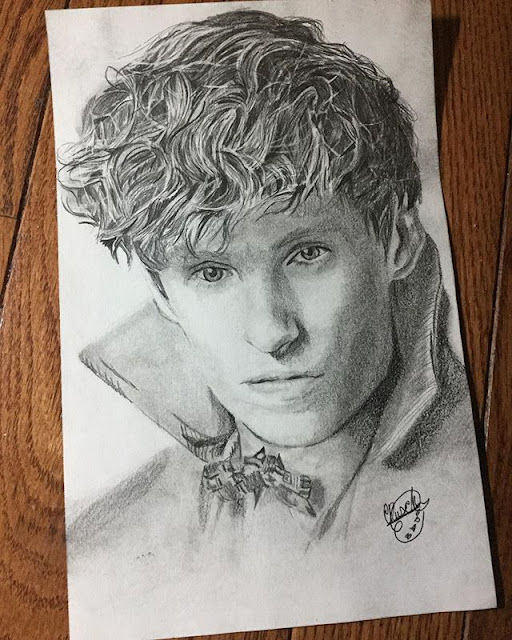 Thanks to @cahseyrussh who posted her beautiful drawings on Instagram recently. 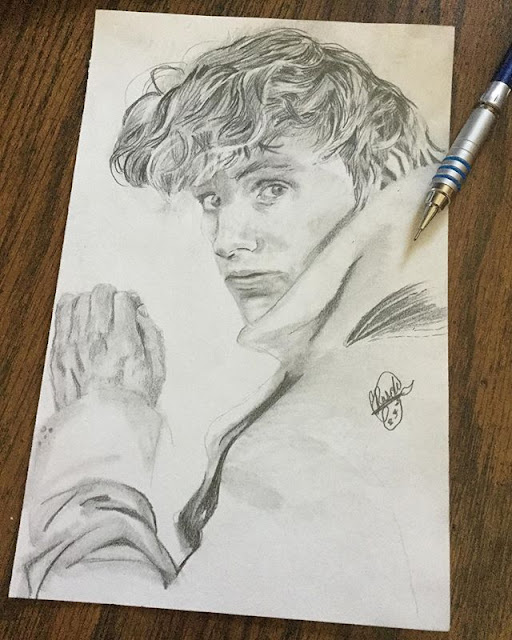 She wrote in her caption: "We all need to appreciate Newt Scamander!
He isn't your typical male protagonist. Not a burly hero-type character.
He is a gentle, shy, yet confident, compassionate man. His superpower
is his extreme empathy for the animals he saves and cares for. Even
for other humans even though he has trouble interacting with them.
His character is extremely refreshing in this time of superheroes. His
gentle and caring nature made me fall in love with him when I first
saw him in Fantastic Beasts 🐉 Frankly, he has me wishing he was
my boyfriend. SEND ME A NEWT SCAMANDER! thank you"

I prefer a Newt Scamander to a conventional male hero too.
Posted by Jutka at 3:17 PM No comments: 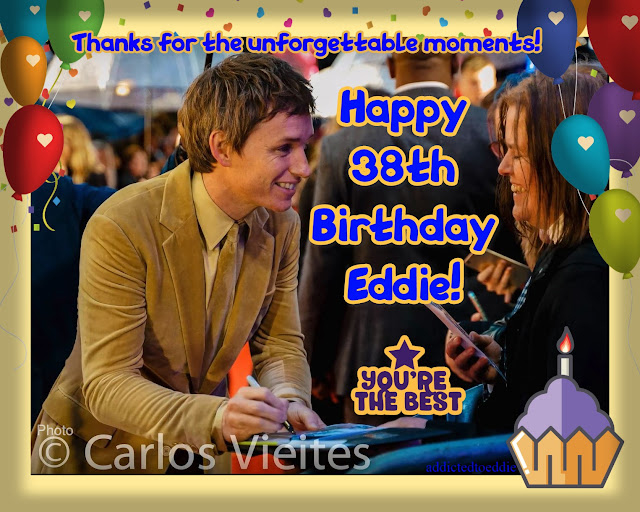 This is my edit for your Birthday Eddie!
I saw The Aeronauts five times already. This is a masterpiece.
I'm looking forward to your next projects and hope, that your
wish comes true and you can play a 21st Century character soon.
I wish you all the best in your career and personal life!

A huge thank You for the photographer Carlos Vieites,
who captured one of my most precious moments with Eddie
from the BFI London Film Festival Major of London Gala
premiere redcarpet on 7th October 2019 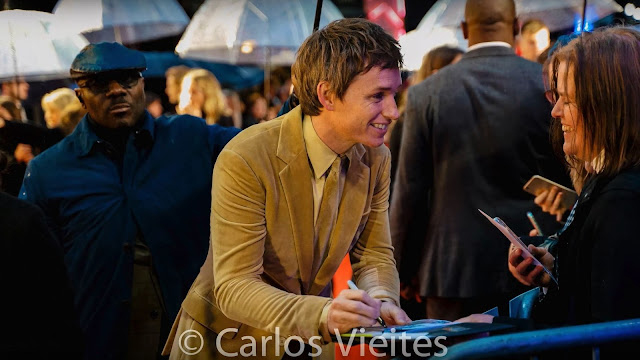 Finally, I got to meet Eddie for the second time last year. I traveled
to London for 'The Aeronauts' premiere in October with my friend.
If you are really determined, don't wait for luck, go for it!
"You cannot change the world simply by looking at it..." 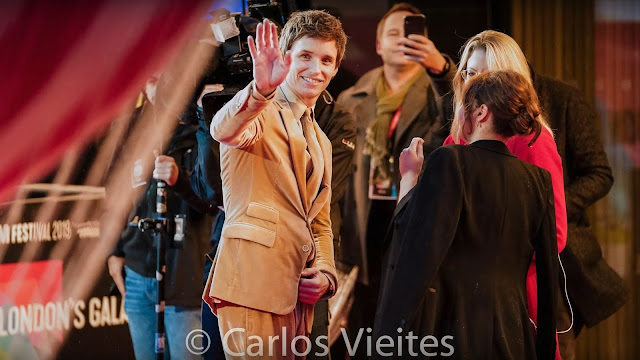 Related Tumblr posts
Fanmade Tribute video playlist
My related post:
Me and my friends at the Major of London's Gala on 7th October 2019

'The Aeronauts' available now exclusively with Amazon Prime Membership.
In the featurette released by Prime Video Eddie Redmayne and Felicity Jones
talks about the filming illustrated with some beautiful footage from the movie.

“For me, it’s the same anxieties that you have whenever you go to work,
you’re trying to do the best possible job and you’re trying to battle your way
through your own self-doubt, but getting to do that with a dance partner
like Felicity Jones was made it that much easier.” - Eddie Redmayne

Although the lineup is very crowded, I'm still hoping
some awards love for this wonderful movie.
Amazon Studios 'The Aeronauts' consideration page

JAMES: “I don’t know what you did for me up there
but I have no doubt it was a great act.”
The Aeronauts screenplay by Jack Thorne

“There’s a bit towards the end of the film where these two people hurtling towards
the ground as the balloon disintegrates. Felicity and I are basically up on this hoop
of the balloon for maybe two weeks having all sorts of elements, wind machines,
leaves, bushes sort of whipped in our face. It was total chaos and carnage, and
I found it pretty intense but compared to what Felicity had to go through in the
film it was nothing.” - Eddie Redmayne