Variety conversation on The Trial of the Chicago 7 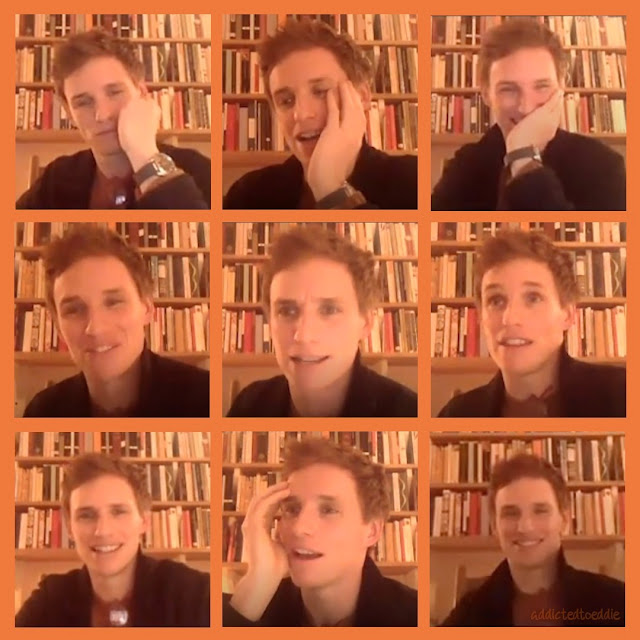 Eddie Redmayne said the film was an “urgent story to tell.”
Watch the video here
Eddie went shopping in London Wednesday, Feb.24, 2021
New candid photos here
Posted by Jutka at 12:17 AM No comments:

New long BTS video for The Trial of the Chicago 7 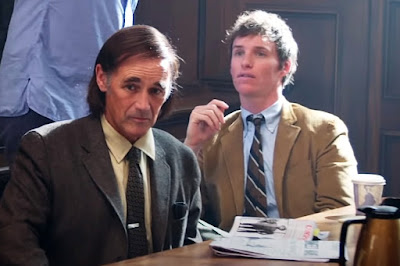 A deep dive into a towering, timely story of conflict and
conviction. Behind the Scenes with Aaron Sorkin and the
cast and crew of The Trial of the Chicago 7. 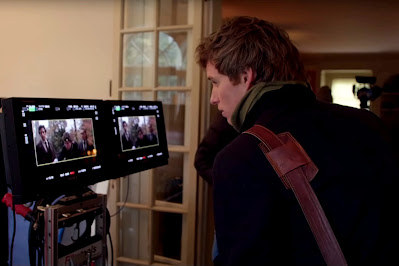 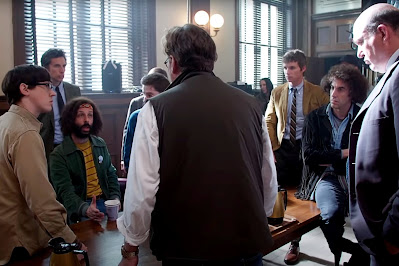 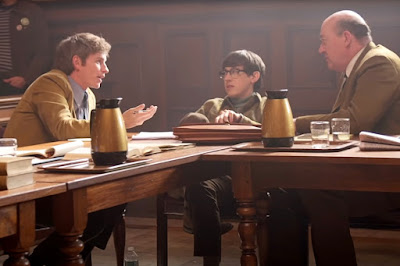 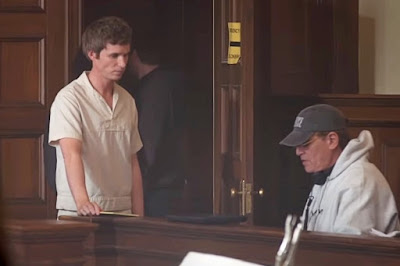 My screenshots from the video below.

New BTS video from Netflix with interviews, and clips.
Posted by Jutka at 12:29 PM No comments:

Watch The Trial of the Chicago 7 on YouTube now! 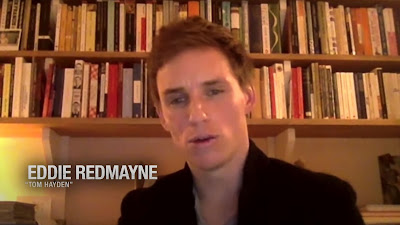 On February 18, 1970, the verdict in The Trial Of The Chicago 7 was announced
To commemorate the anniversary of this monumental trial,
The Trial of the Chicago 7 is available globally
for 48 hours for free on Netflix US YouTube Channel
until Saturday, Feb 20th, 11:59pm PST

Click here to watch the movie!
Posted by Jutka at 9:20 PM No comments:

NPC conversation on The Trial of the Chicago 7 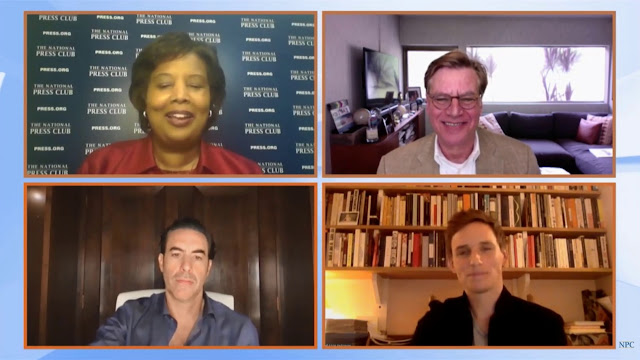 On February 18, the 51st anniversary of the trial’s end, Aaron Sorkin, the writer and
director behind the film The Trial of the Chicago 7, and stars Sacha Baron Cohen
(“Abbie Hoffman”) and Eddie Redmayne (“Tom Hayden”), will join National Press
Club President Lisa Nicole Matthews for an in-depth discussion on the legacy of the
Chicago 7 and the movie’s relevance today following a year of massive protests and
America’s long-overdue reckoning with systemic racism. 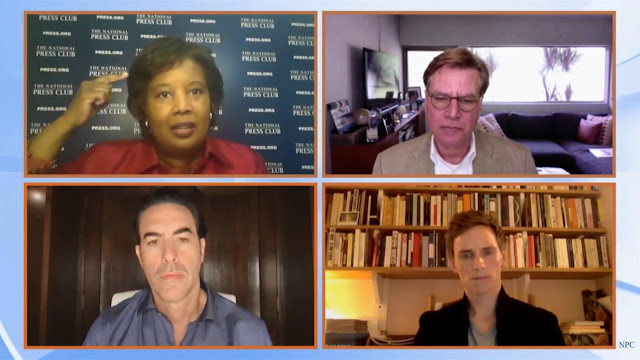 "The weird thing when you start out acting is that it's quite a solitary thing. You go
and you make a film or you do a play, you become very close very immediately
with a group of extraordinary people. And you then go off and do another one.
Now...film crews are ofter work in smaller groups together so they might bump into
each other more often. In acting, it doesn't happen so much. Fortunately having been
in it long enough you begin to remeet people and reconnect. For me - Sacha and I,
we've met on Les Miserables. That was an extraordinary experience. We're getting
to work together here, it was wonderful. Mark Rylance who's in the film had given
me my first ever job in a production of Twelfth Night in which he played Olivia
and I played Viola twenty years ago, so I genuinely have him to thank for my career.
Down to Jeremy Strong who was an old (pal) ... it was this wonderful mixture of
people that I haven't seen for a long time, new people, Yahya and Kelvin, whom
I haven't work with, Frank who I had met, so it did have this kind of familial
quality to it, but the most glorious thing was, everyone had totally different
processes, so it felt like all these different ... sort of musical genres colliding..." 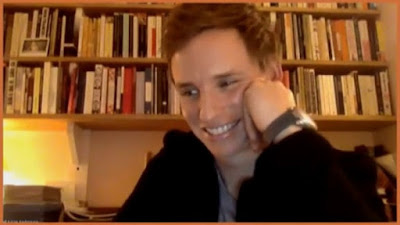 Aaron Sorkin: “Anyone who is a fan of Eddie in Les Mis, which would be
everyone, go and also watch The Good Shepherd. It's one of the first films
Eddie did  - Matt Damon and Eddie - And you’ll hear Eddie sing
‘Shenandoah’ like you’ve never heard anyone sing it before.
You can tell from watching it.”
Eddie: "Oh, Aaron I love you, but you’ll also see one of the worst performances
I’ve ever done in my life because I was so terrified about getting fired.

Related posts on Tumblr
Posted by Jutka at 8:46 PM No comments:

In this new video, Eddie shares a turning point in his career where times were tough, but
Phil Willmott & Liverpool Everyman & Playhouse theatres were able to lend a hand. 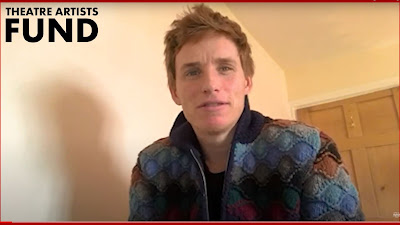 "The turning point of my career was in 2003. I was working in a pub. Had been
for months and completely failing I was flunking auditions, getting pretty shoddy
feedback, and beginning to lose faith. And then someone took a risk on me.
That person was Phil Willmott, and it was for a play called Master Harold and
the Boys, by Athol Fugard. It was being done at the Liverpool Everyman.
The Liverpool Everyman and Playhouse, the artistic director was Gemma
Bodinetz. That whole experience was just, it was mind-blowing for me.
It was filled and teaming with creative people doing brilliant things. I loved
the play and I began to have a bit more faith in myself. I am forever grateful to
those people and to the Liverpool Everyman and Playhouse for that experience."
2003 - Master Harold and the Boys - Liverpool Everyman Playhouse

On March 16 2020 Theatres were first into lockdown & will be the last to reopen.
Thousands cannot do the jobs and many have fallen through the cracks.
It’s a challenging time for theatre actors. Eddie encourages you to visit the website
of the Theatre Artists Fund if as an actor you’re in urgent need or you want to help.
Theatre Artists Fund website 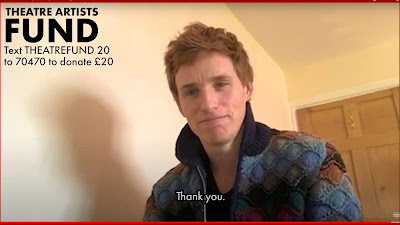 Find out how can you support the charity
Thank You!
Posted by Jutka at 8:21 PM No comments:

Next Up The Good Nurse 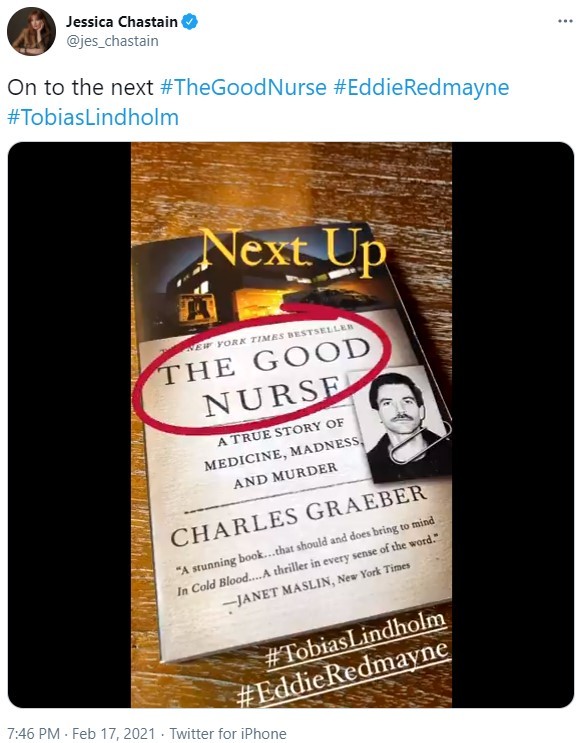 Eddie’s next movie The Good Nurse is on the way.
Eddie’s co-star Jessica Chastain Tweeted about it. 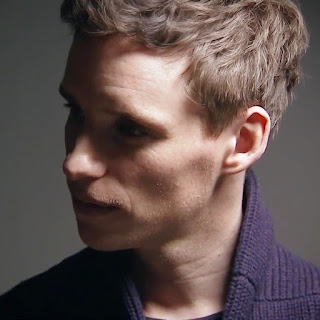 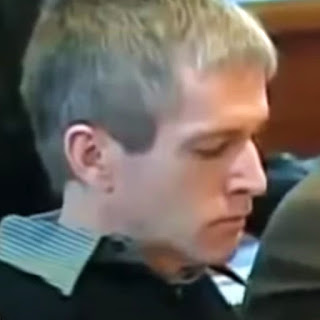 This is an exciting thriller adapted from Charles Graeber’s crime novel
based on real events. The movie is set to direct by Tobias Lindholm.
Eddie Redmayne plays Charles Cullen, the infamous caregiver
implicated in the deaths of hundreds of hospital patients.

She posted these wonderful drawings on her IG account 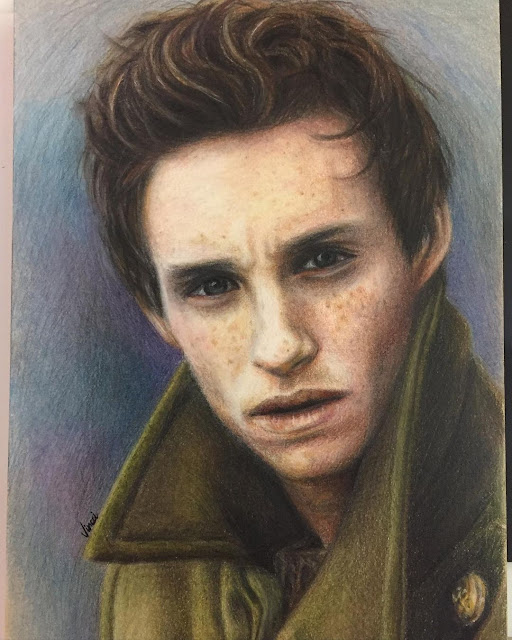 This color pencil portrait of Eddie is her favorite and mine too. (x)
It's based on a photo by Jason Hetherington for Observer Magazine.
(Shot on December 20, 2011) 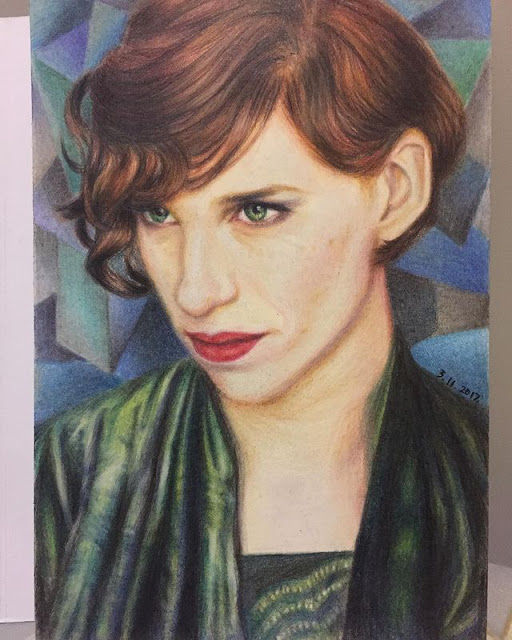 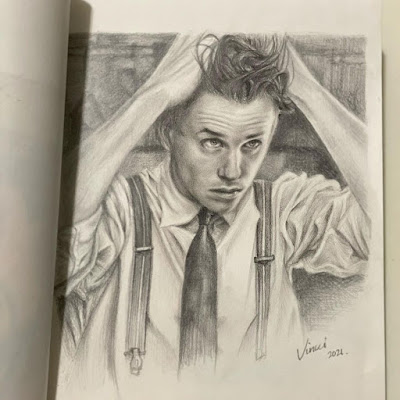 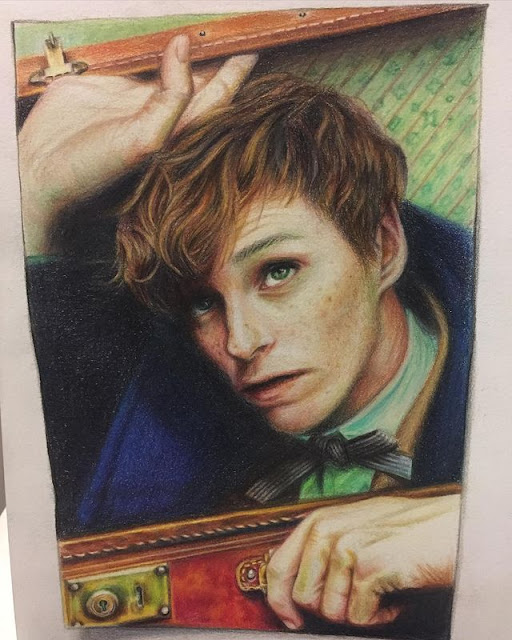 Email ThisBlogThis!Share to TwitterShare to FacebookShare to Pinterest
Labels: artwork

TODAY Show interview on the timeliness of the courtroom drama

Stars Eddie Redmayne, Sacha Baron Cohen, and Yahya Abdul-Mateen II.
chat with Al Roker about the timeliness of ‘The Trial of the Chicago 7’.
You can watch the video here

"Most actors love Aaron Sorkin's writing because he writes very intelligent characters
who speak incredibly quickly, and basically substantially brighter than you are..."

"One of the great pleasures of this film for me was being surrounded
by this extraordinary band. It felt like this sort of wonderful clashing
of different types of music. You had a bit of jazz, you had a bit of
punk, and classical, all of these things combining."

“The writing is so muscular and full, that actually we’re just so sad
not to get to say those words again, so maybe they’ll be. I heard, that
originally Aaron thought about doing it as a musical, so maybe...”

Links:
Eddie Redmayne on 'The Trial of the Chicago 7' Camaraderie
and Film's Parallels to America Now
Interesting interview by Tyler Coates for The Hollywood Reporter
Related Tumblr posts
Chicago7interview
Chicago7promo
Posted by Jutka at 4:45 PM No comments:

The movie was nominated for 3 SAG, 5 Golden Globe, 6 Critics' Choice,
and more awards won Movie of the year at AFI Awards.
More nominations and awards to come in the coming weeks.
List of Awards and nominations
Posted by Jutka at 8:58 PM No comments:

Poem about Eddie by Elizabeth Estella 💖💖 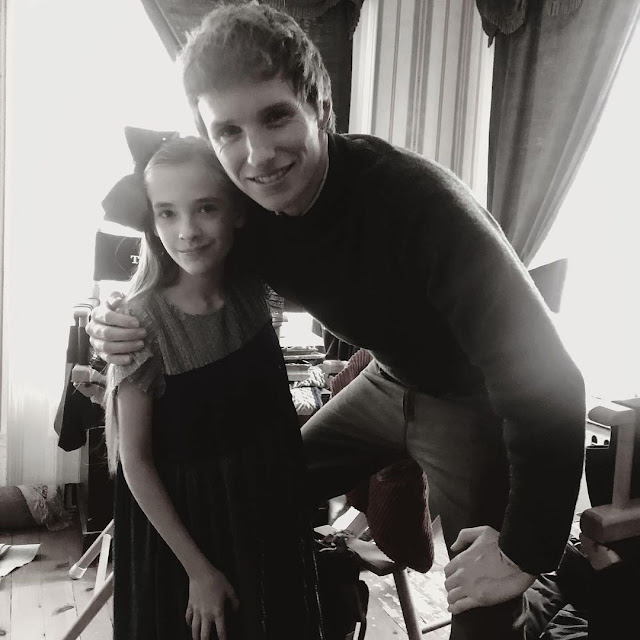 Thanks to Elizabeth Estella for sharing her photo and poem on Instagram.

The Last Thing You Want

The last thing you want is Eddie Redmayne

seeing you at your very worst in your own home

though this will in fact happen. Your father

will have a heart attack weeks before,

your mother will somehow be annoyed

by all of it, so you don't even tell them

Eddie Redmayne is here! Just outside the door!

He could certainly have said,

you better not bring that cat out here,

but from the plaster landing

the actor and your child speak

of dander, gently he tells her the way

his aunt's makes him sneeze

politeness. The people you least expect

to be lovely to your daughter

at a time you fear the impossibility

of kindness, will be movie stars.

You brush your teeth, and head back

to the mustard chair that isn’t part

of the mustard set, but is I guess

Source: https://www.instagram.com/p/CKzUfVmDG0M/
Posted by Jutka at 7:31 PM No comments: