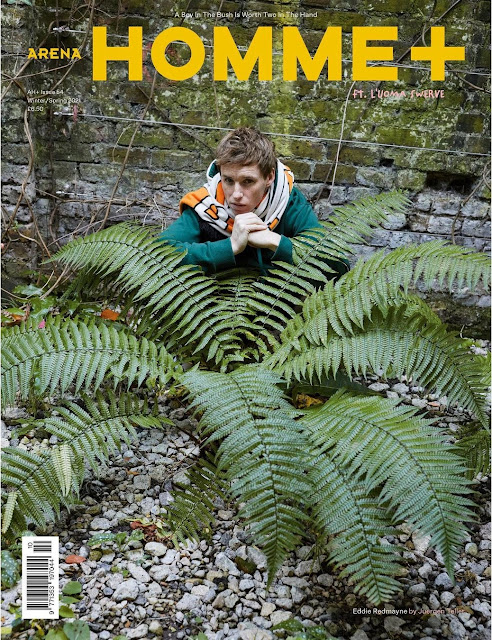 Eddie featured in the new 54. Winter/Spring issue of
ARENA HOMME+ magazine
'A Boy In The Bush Is Worth Two In The Hand'
Photos by Juergen Teller
Styling: Stephanie Waknine 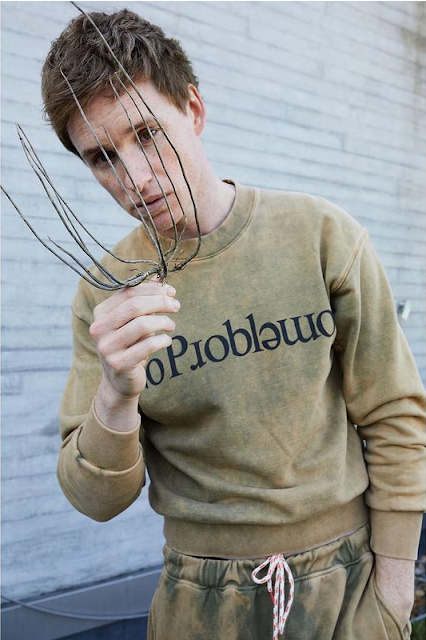 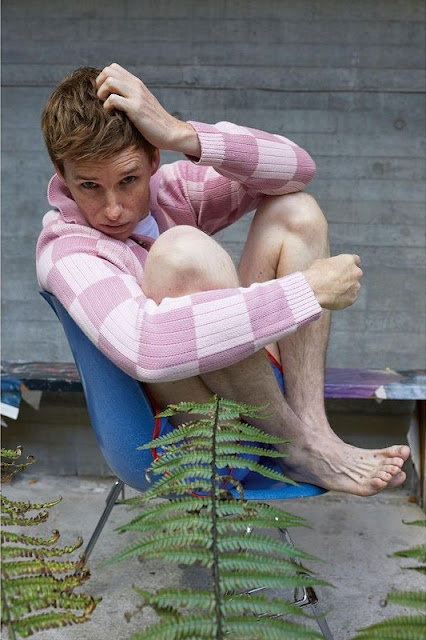 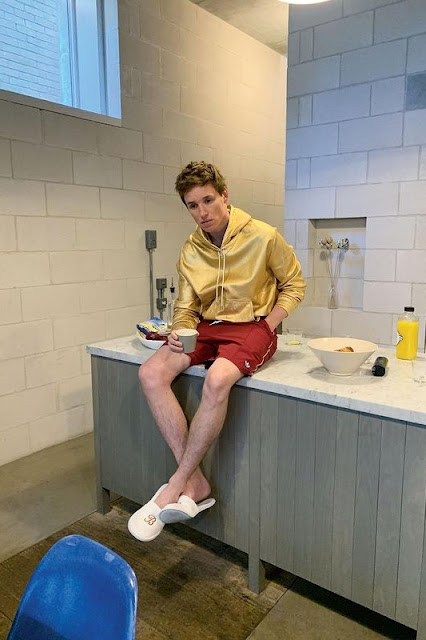 POP @thepopmag on IG posted: "Eddie! Eddie! No problemo...
The wonderful Eddie Redmayne broke off from filming 'Fantastic Beasts'
to shoot with Juergen Teller for AH+ 54. 'People always put me in tweeds,'
he says. 'Love you guys...' #EddieRedmayne #ArenaHommePlus #AHPlus54
Related Tumblr posts
Posted by Jutka at 11:00 PM No comments:

SBIFF - The Trial of the Chicago 7 online Q&A 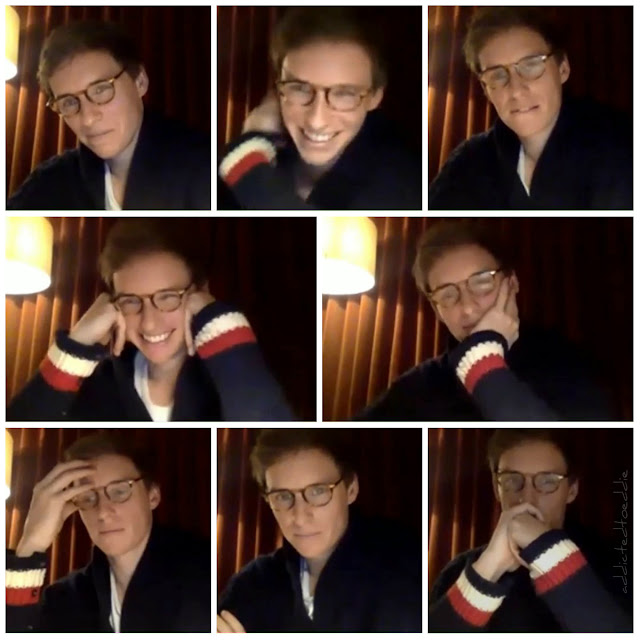 “...the first time humor, and any performance I’ve ever done, been connected...”
"Tom, in the way that Aaron organized the film...he is the sort of antithesis
of Abby. He is perhaps straighter and more suit and tied than he actually
was because it plays out that dynamic and infuses the drama with more..."
“... What was important to me was that you saw in those early moments
glimpses of charisma because his charisma was so extraordinary but
it was a quiet charisma. If you ever watch on YouTube his speeches,
he had extraordinary rhetorical capabilities that drew people to him...”
“Aaron said on day one, this is a painting, not a photograph, and
I wanted to be his version of that person." 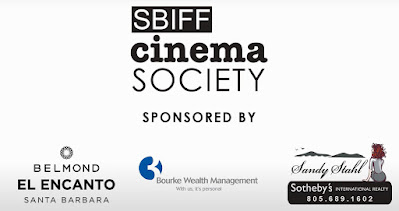 More CH7 interviews on my Youtube playlist
Posted by Jutka at 11:12 PM No comments: 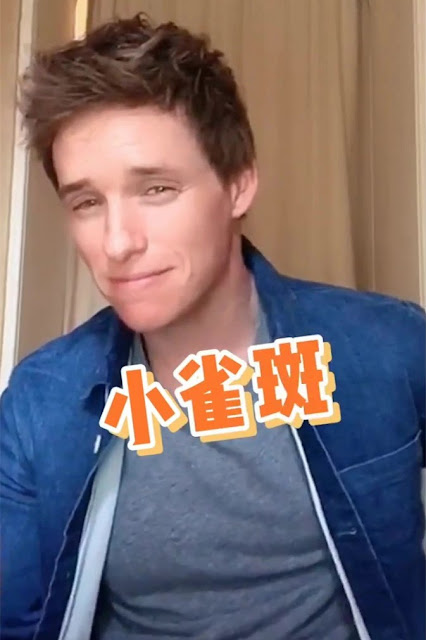 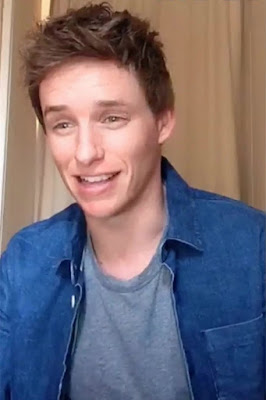 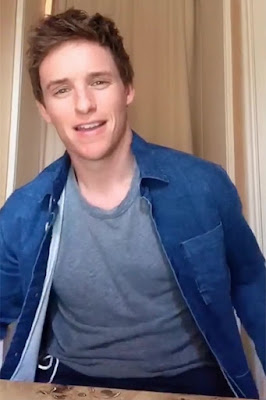 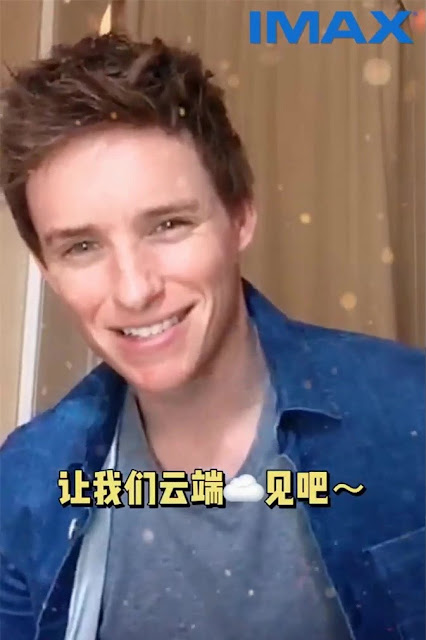 my screenshots from the IMAX video

The video posted by IMAX on Weibo is here
Eddie greets fans and says his nickname in Chinese.
The clip compilations below by Amazon Prime Video prove
that this movie deserves to be seen on the big screen.

You can also find trailers and BTS featurettes on my playlist.
New Chinese posters for the movie 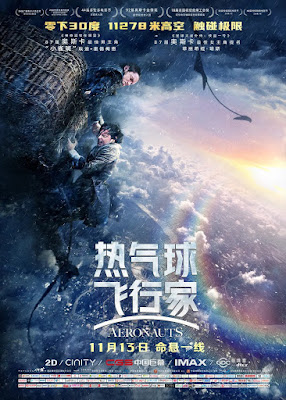 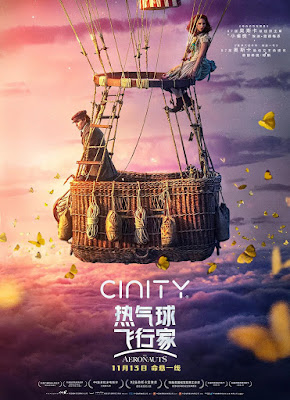 Eddie Redmayne tells fans in China to dress warmly, buckle up to watch his film The Aeronauts as the huge IMAX screen and sound gives you more vivid adventure experience in the sky. pic.twitter.com/RNseTLqwy7

Another video promoting the movie's release in China on Twitter,

Bad news! Johnny Depp has been forced to exit the Fantastic Beasts franchise:
"The role of Gellert Grindelwald will be recast. The film will debut in theaters
worldwide in the summer of 2022," says Warner Bros. (source: Variety)
I'm afraid this will have a bad impact on the success of the third movie.
Fantastic Beasts 3 new release date: July 15, 2022

Depp was great in the role of Grindelwald, it will be hard to replace him.
I support his return to the franchise.
Petition to WB - Petition 2
Read more
Other NEWS
A new TV ad video is coming soon - M&S  will launch every week
a new charity-led Christmas food ad from now until the new year,
each voiced by a different celebrity. There will be one with Eddie
Read more
LUXMURALIS shared a new video accompanied by
a moving rendition of "Asleep" by Eddie Redmayne.
Listen to his voice!
Posted by Jutka at 8:58 PM No comments: 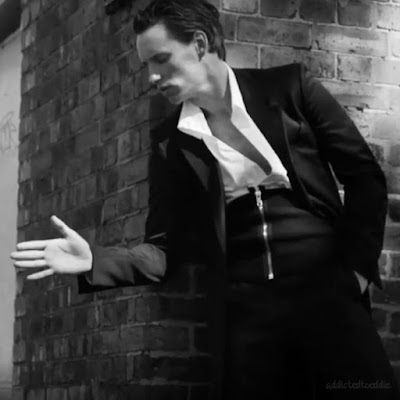 Thanks to Boo George photographer who posted on his Instagram
a beautiful new video he did of Eddie Redmayne recently. 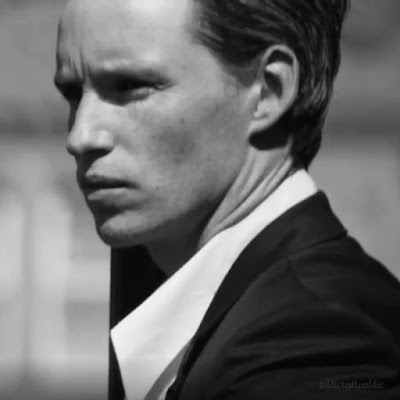 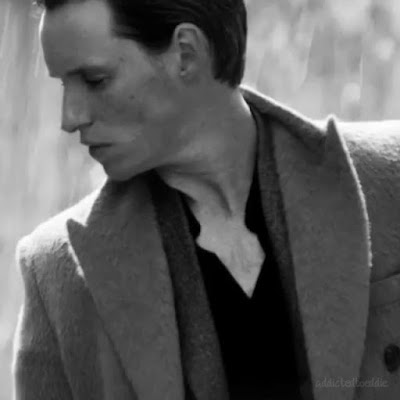 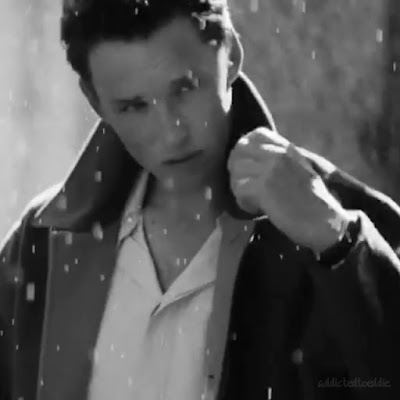 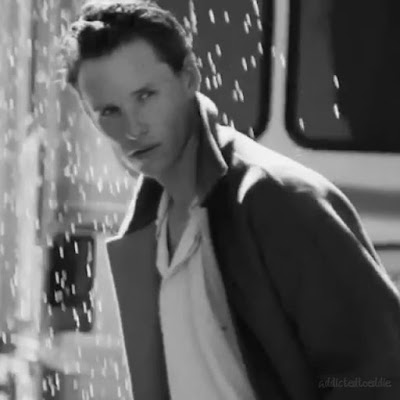 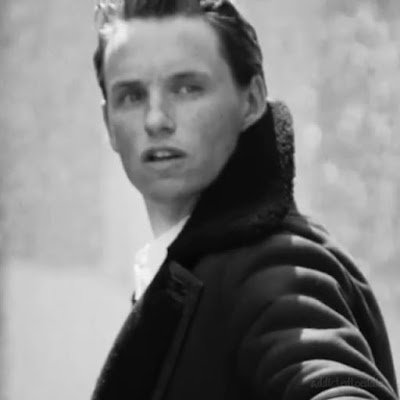 More in the related Tumblr posts

A film I did of Eddie Redmayne recently

This cut contains the parts of the show in which Anikó Návai chats with Eddie Redmayne
about politics and lockdown. The first segment of the latest episode of Hello Hollywood
was about The Trial of the Chicago 7. She also talked with the director & screenwriter
Aaron Sorkin and Frank Langella who plays the judge in the movie. Her interviews are
always special. Eddie is relaxed and cheerful because she's a friend. She's a journalist and
TV presenter based in Hollywood. She knows all the stars well and is the only Hungarian
member of HFPA, the organization that instituted the annual Golden Globe Awards.
Video credit:
Hello Hollywood TV program about movies
https://www.facebook.com/hellohollywoodofficial/
on Life TV Hungary (on 1st November 2020)
Interview by Anikó Návai

Eddie, when was the first time you heard the word politics?
"I think it must have been... you know I grew up in the UK in the 80s and Margaret Thatcher
was around, and it was very a kind of rigorous time politically and heated time, so I remember
sort or 6, but I don't think I... I mean I understood very little that um probably let's say 8 or 9.
I think that's the thought I was sort of politically aware at 5 or 6 is ridiculous. Let's say 8 or 9.
When did you become conscious politically?
I don't think I can answer that. I don't think it comes in a specific flood of a moment. It's
something where the concerns that you have, the concerns that people around you have.
I remember sort of with the Iraq war and with Tony Blair and that moment being the hulk
and weapons of mass destruction being incredibly shocking and realizing...
I think as a child you sort of believe that politicians know what they're doing and the
system is encouraged to make you think that. I think as you get older and... some of the
people rising to power are sort of your age, it becomes more scary because you realize
how little you know, and quite often they expose themselves, how little they know."

How political are you now? "It's a very good question. I believe that advocacy is something
that you work on sort-of daily. I consistently kind of question myself. I was talking earlier
in the meeting about, as someone in the public eye, we're in this sort of world now,
where there is a sense that as a celebrity or someone ... your voice perhaps over-amplified.
And with that, I think you have to really question what you speak up about. So I ask myself
basically every day, and I believe that we should and can all the advocates in our own way,
but I try to generally do that in a grassroots way, in a way that for example you know I
obviously through playing Stephen Hawking I met many people living with Motor Neuron
Disease (ALS). Now in this country, I'm a patron of the ALS Association, and during our
lockdown with COVID there was this list of people who were on the protected list, with
people who were very vulnerable, and people with ALS weren't on that list. And so then
I wrote to my local politician, through the charity I tried to speak to and lobby people into
or to encourage people ... but that was just on a human level. I try generally to keep my focus
on my work because I find that there can be hypocrisies like we're very fortunate actors in
the public eye, I have a very lovely life and I don't like being talked down to by people who
aren't specialists in that subject. That being said when I see other people who are amplifying
things that I don't believe in and I think of doing harm, I will add my voice for that.
That's probably quite a messy answer which is perhaps one of the things that I found so
important about this film is that Robert Kennedy Jr said this kind of a riveting thing that
basically, democracy is messy you know and it's hard, and it's something that is kind of...
I think that this film sort of shows that. It's something that you've got to kind of fight for."

Let's talk a little about the lockdown, about you and kids and Hannah. How did the
whole thing go? "We have a little farmhouse in the countryside. We have chickens,
Hannah is an amazing gardener, so we basically were quite self-sufficient. I've
always like had a little inkling of a dream. My favorite book when I was a child was
this book called Mr. Tick the Teacher, which was a book about a couple who had
six children, and they had a little school, and they only had their kind of six children
in the school so this was basically and they were teachers and cooks and everything
and this was kinda my moment basically with my four years old daughter to be
Mr. Tick the Teacher... And it was amazing because I got to be there when she
first began to read and I got to ... now that being said we also had our hands full
completely it was... it's been you know until my children have just gone to
school but it's been exhausting but we've been very very lucky..."

"...I miss Hungary. I've been thinking about it a lot recently because I... I spent almost a year
living in Hungary when I made two television series (The Pillars of the Earth and Birdsong)
in Budapest. And I miss that city a lot..."
Posted by Jutka at 11:51 PM No comments:

Email ThisBlogThis!Share to TwitterShare to FacebookShare to Pinterest
Labels: interview, Trial of the Chicago 7

Outtakes from the 2014 Dujour Magazine photoshoot

Thanks to Alex John Beck photographer, who posted a few outtakes on Instagram. 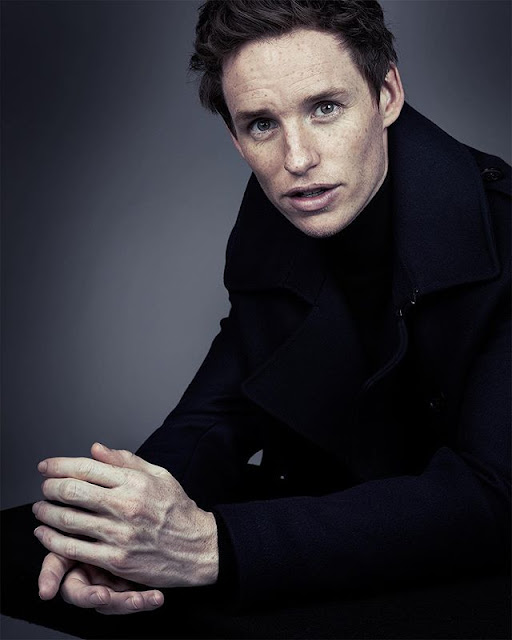 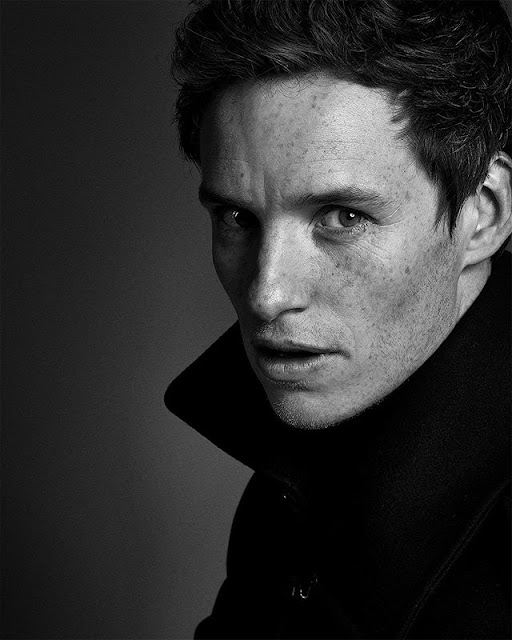 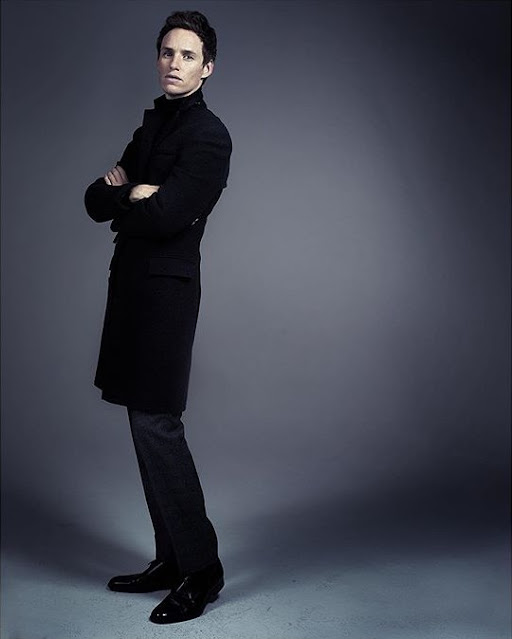 He wrote: "‘Eddie! What have you done for me lately?’
If you can name the quote you get a prize.
The prize is questionable taste.
Great to see #eddieredmayne in @trialofchicago7
/ back in the day for @dujourmedia / #trialofchicago7
Links:
DUJOUR, MR PORTER, New York Times photos, articles
Dujour: The Contenders - Men of the Year photoshoot (BTS video)
Dujour: The Contender: Eddie Redmayne
Tumblr posts
Posted by Jutka at 10:19 PM No comments: