Eddie Redmayne joined Dan Fogler for a chat on Valentine's Day 14th February.
You can listen to their chat here:

source via snitchseeker.com - Eddie from about 22:00

They started with talking about Alison Sudol's trip to Antarctica for Greenpeace
promotion, then they analyzed Eddie's name. His surname Redmayne,
possibly dating back to William the Conqueror (either a work off 'Red Man'
or 'Red Hands'), while Dan broke down the meanings of Eddie's full name
(Edward John David Redmayne). - Do you like history?

Eddie told a story: “Katherine Waterston, who plays Tina, who is heaven was
really getting into family history …and she leapt onto the makeup trailer one day
and was like ‘We’re related!’. I was like: What? She like found something,
by which her family and my family related...she said it's back quite long way...” 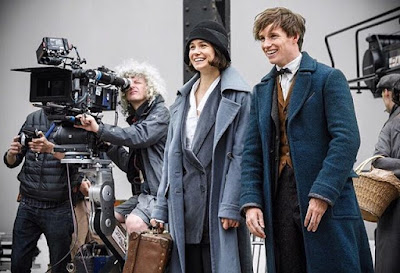 Star Wars references and Eddie's audition came up, and his time in New York.
"It's like the intoxicating, sort of hedonistic place, where stuff happens..."
Eddie: "I'm here on my lonesome promoting, but I'm going back to London
tomorrow, and my wife and I are having a belated Valentine's celebration."

Dan mentioned Eve Ensler's One Woman Show (more)
Eddie said: "I just find it such a terrifying prospect...
What I love about theatre is get into play off people."
(with Molina in 'Red') 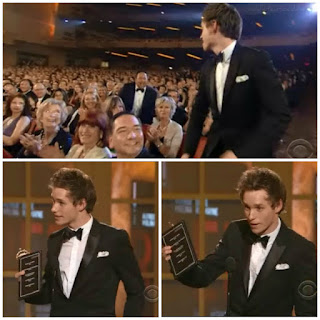 Eddie told a story about the night of his Tony win in 2010.
"My mom is like a wondefully competitive person...I said her beforehand
...when I don't win, you can't get too upset... anyway, I was lucky enough
to win, and my mom was like totally stone faced, poker faced..."

Next they talked about their favorite Aardman movies, praised Nick Park
and Eddie went into details about his Aardman studio visit. Dan also asked
Eddie about his Early Man co-stars and voice-acting work.

Dan revealed that they will be making Fantastic Beasts: The Crimes of
Grindelwald in 4D (similar to Fantastic Beasts and Where to Find Them),
included with interactive seats and sound, and that he will be going into the
4D studios to see how that will be added to the final product later this year.
The 4D team are only given a couple of weeks to add the extra effects. 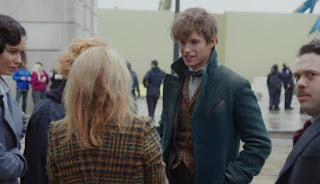 Dan asked: "What was it like for you to suddenly be the central character in a
J.K. Rowling franchise? You are the Harry in our movies. You are the central
character. You're on every f*** magazine, you are the guy."

Then Eddie talked about how he was cast in Fantastic Beasts; said that David
Yates wanted to talk to him about a top secret project back years ago. They
met in a small pub in Soho in London, where Yates talked about Newt and
J.K. Rowling's story about him, then commented on Newt's case. The same
time Eddie had his own almost-identical suitcase with him. When he could
finally read the finished script months later, he had a 'hell yeah!' moment.
Eddie and Dan chatted about the bond between the four Fantastic Beasts leads,
the four outsiders that come together and also about some deleted scenes. 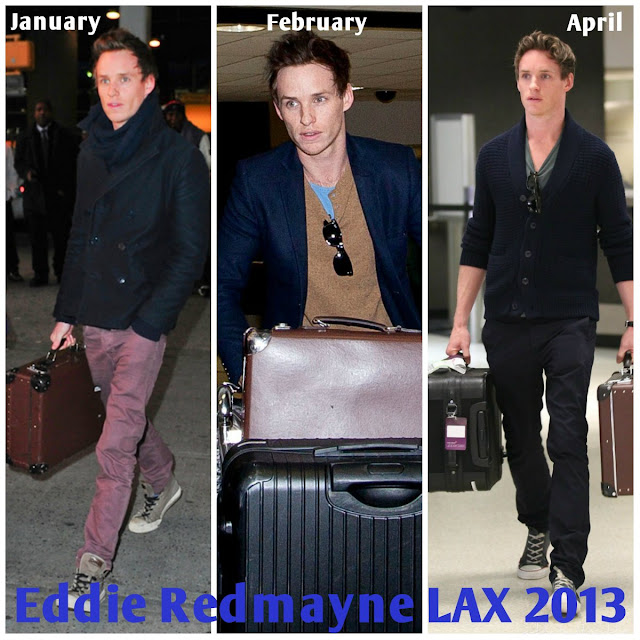 Les Mis promo tour 5 years ago with his brown case

"I love about what David and Jo have created is, they kind of
really allowed us the freedom to bring thoughts to...everyday."

They then jump over to having seen Harry Potter and the Cursed Child in London.
Eddie recently saw the play (20th Jan 2018). He said: "I really enjoyed the Potter play.
I actually just working with Jack Thorne (He's the screenwriter of The Aeronauts),
who wrote it with J.K. Rowling. It was sort of theater at its most innovative."

Eddie mentioned, that he and Yates spoke about how to humanize the creatures in
Fantastic Beasts, the Niffler was actually a child, and the demiguise an old soul
in the first feature. Dan called Jacob Kowalski the past version of himself, loyal,
street smart, with a big heart, who's ready to fight for what's right... He said
J.K. Rowling told him three-four movies' worth of information on the set of
the first installment, but at a party for the sequel she admitted she changed all
those original details. Dan comments on how Eddie has only a few scenes' with
Jude Law as Dumbledore in Fantastic Beasts: The Crimes of Grindelwald.

"You wouldn't stay in those positions, it's about learning to be able to access into..."

Eddie told about how he worked with a dancer to get the physical movements right
in The Theory of Everything - Alexandra Reynolds helped him during the filming
of Fantastic Beasts (and The Danish Girl) too. The movie was shot out of sequence,
all Cambridge scenes were filmed in two days, before the term started. They also
talked about the collaboration between the various departments.

Dan: So you created the character Newt and is he, did you decide along the way,
because it seems that he’s somewhere on the spectrum. Like he has an easier
time talking with and communicating with the creatures than he does with people.
He can’t really look people in the eye a lot of the time. And that seems like maybe
an autismy thing or an aspie thing
Eddie: I actually looked into, there were a lot of qualities to him that, I just loved
his, I felt he was a special person. And I thought he had a heart of gold and he
struggled to communicate with people but had an absolute passion for these
creatures. As far as him being, maybe having mild Aspergers, what was interesting
to me is that it was only in the 40′s that those terms, autism, Aspergers, became a
thing, so it wasn’t something that he’s conscious of ...

Eddie talked about his disastrous BAFTAs night in 2013. At the end he said
"...the thing I hate about talk shows...you need some of these stories.
I run out. That's a story from five years ago. I need some wreched stories.
I think maybe before we do the press tour for Fantastic Beasts..."

They closed the chat talking about Japan, the earthquake and eccentric talkshows.

I have other playlists for the more recent interviews, they contain basically every
interviews I found while I searched Eddie videos on Youtube in the past years.
These lists include some interviews with co-stars and crew members too.


The Theory of Everything promo videos


The Danish Girl Interview and Q&A


There are lot of playlists on my channel , that I made for my posts.

Email ThisBlogThis!Share to TwitterShare to FacebookShare to Pinterest
Labels: compilation 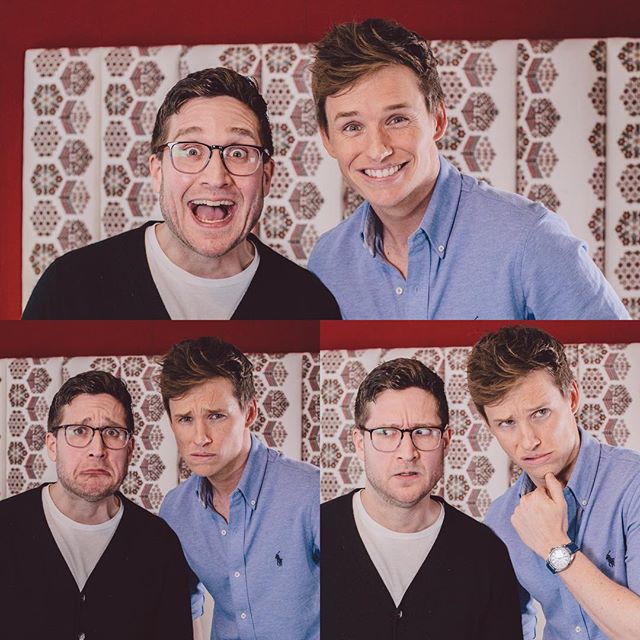 MTV News’ Josh Horowitz talks with Eddie Redmayne about what it was like playing Dug
in "Early Man" and provides updates on the upcoming “Fantastic Beasts” sequel.
Eddie mentioned 'Alf' and 'Banana Man' 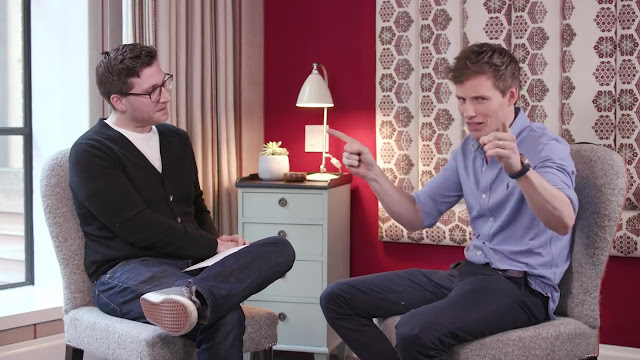 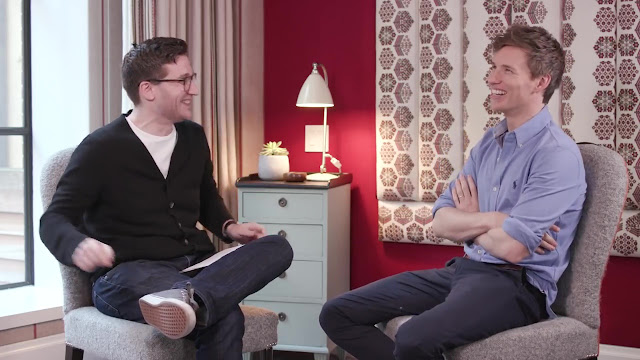 "...You turn up and Nick had already made the model of Dug, and he showed mw some animations...
and you basically just piss around in a booth for an hour, to trying lots of ridiculous things, and
Dug ended up being some sort of version of how I voice my daughter's teddy bear to her, so
basically slightly high-pitched and eager." 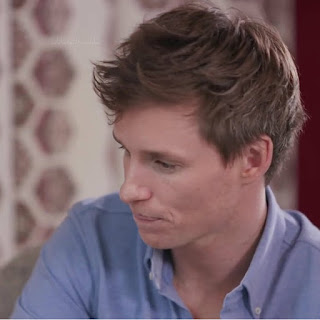 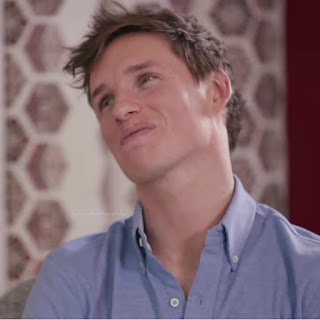 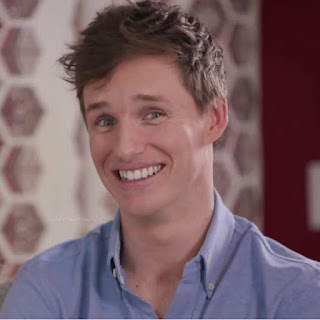 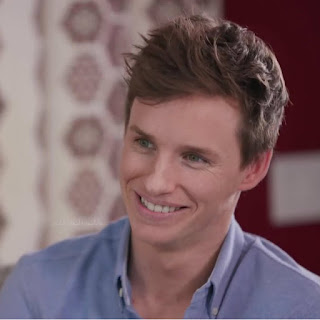 Q: Are you a master impressionist like Tom Hiddleston?
Eddie: No ... no, completely not... please don't make me do one 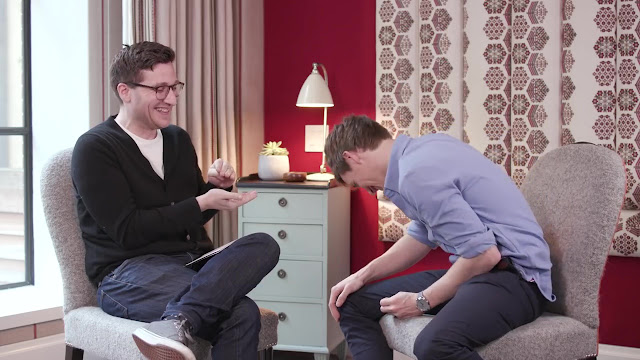 ...this is like the bucket list of dreams for many actors - Yeah!
- Do you feel like you need to come up with a new goals...?
- "You know, what the truth is, I was not a goal person. I think, when
I was younger, I always did have goals, and then I realized, life is just
hideous disappointment...and so I learnt cull goals, and it was when
I started culling goals, that things actually started going well..." 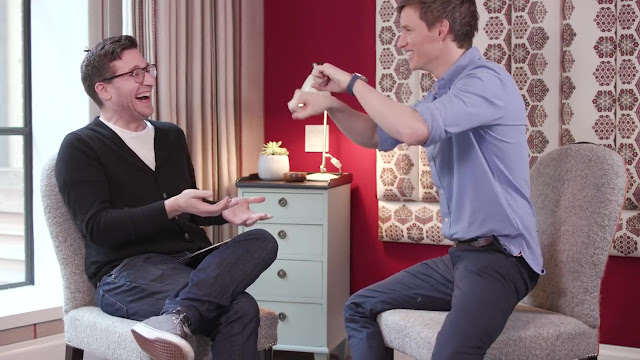 my screenshots from the video


Here is a list of Academy Award Winner Eddie Redmayne's best performances,
including 'The Theory of Everything', and 'The Danish Girl'.
In the video there are short clips from Eddie's 5 most successful movies.

Newt Scamander in Fantastic Beasts and Where to Find Them (2016)

Eddie Redmayne as Lili Elbe in The Danish Girl (2015)

My gifset on tumblr

Stephen Hawking in The Theory of Everything (2014)
Three years ago Eddie won the Academy Award fot his extraordinary performance.

Colin Clark in My Week With Marilyn (2011)
My filmography post


This is not exactly the same, as my top 10, doesn't include Eddie's
performance as Jack in The Pillars of the Earth, and Stephen Waysford
in Birdsong, which are among my favorites.

Email ThisBlogThis!Share to TwitterShare to FacebookShare to Pinterest
Labels: compilation

Eddie in the Live with Kelly and Ryan show on Friday

Eddie was a guest in the Live with Kelly and Ryan show yesterday (Feb.16, 2018) promoting Early Man in NYC

You can watch the full interview here …

Eddie: "We've just about got to that stage where we're just beginning to sort of get sleep and
remember what that word means," he said. "I'm getting prepped to go back into the trenches." 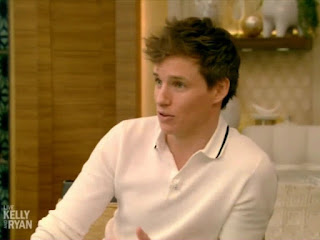 Ryan: So do you pick two names?
Eddie: Yeah! What is interesting, because last
time we didn’t know either, and we sort of did
that thing where there was basically only one
name for each sex that we agreed on. So, if it’s
a boy, we have a name, but if it’s a girl…I think
we’re still in discussions. We’re negotiating.”

"When we had Iris, I remember early on in Hannah's pregnancy, people were like, 'Are
you going to find out?' Hannah went, 'No,' and I went, 'Yes,' at exactly the same time,
" Eddie said he would then tell people, "No! Obviously, no! I mean, whatever...!"

Ironically, the nurse slightly sort of accidentally gave it away to Hannah—but
she didn't tell me. She sort of had a sense that Iris was going to be a girl."

Joking that his daughter is "basically a prodigy," Eddie said Iris doesn't quite grasp
that she's months away from becoming a big sister. "I thought she was genius child
because she came up to Hannah and started kissing her tummy and saying 'Baby!
Baby in there.' I was like, 'Ah, amazing!' Then she came up to me, kissed my tummy,
kissed her own tummy and said, 'Baby in there.' Uh...not quite. She also calls her toy
monkey 'Baby,' so..." - VIDEO

In the second part he talked about Allison Janney 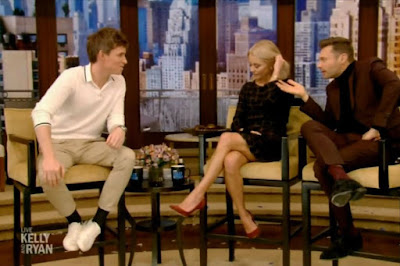 In the third part of the interview Eddie talked about 'Early Man'
Eddie talked about the recordings, the physicality, soccer and more...
Eddie: "I'm completely useless in most sports and particularly football...
My brothers are like genius soccer players. I was never gonna be in a
sort of sports movie, in which I got to actually be any good at that, so
I decided to do the claymation version, and I get to do like overhead
kicks, and all of this stuff.
Kelly: Your brothers are good at football...Eddie: Yeah! Exactly.
Kelly: But how many Academy Awards do they have? Eddie: Yeah!!! 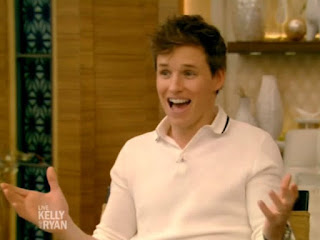 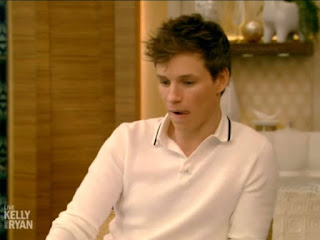 E-NEWS: EDDIE REDMAYNE DOESN'T KNOW THE SEX OF BABY NO. 2,
BUT HE DOES HAVE NAMES PICKED OUT 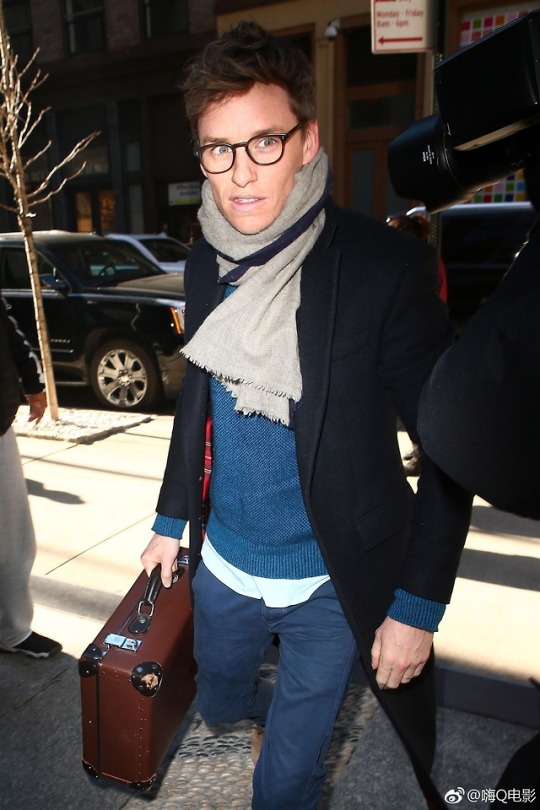 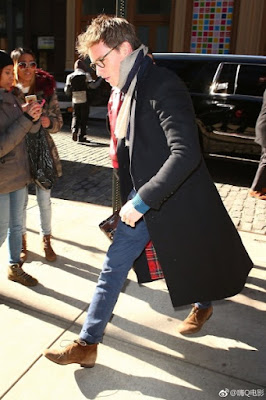 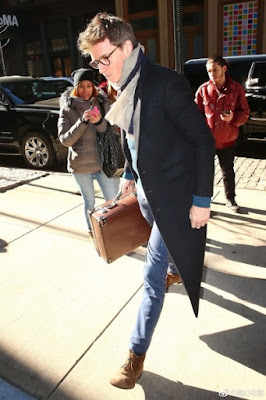 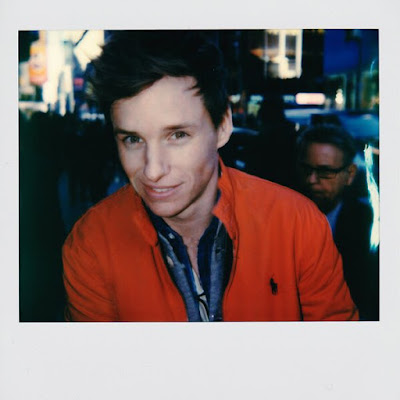 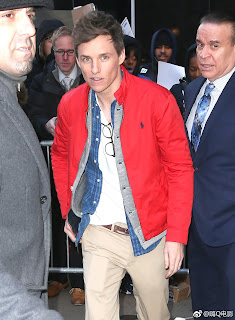 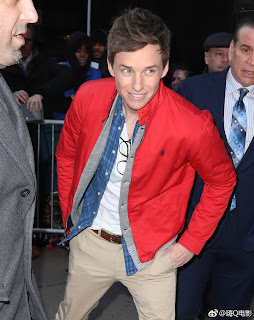 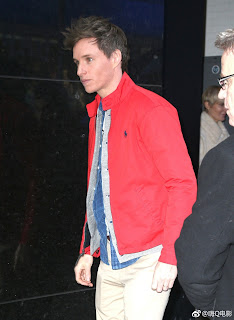 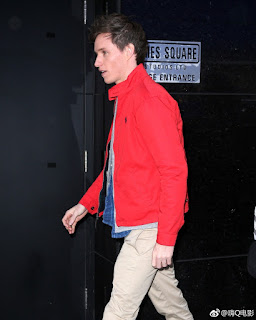 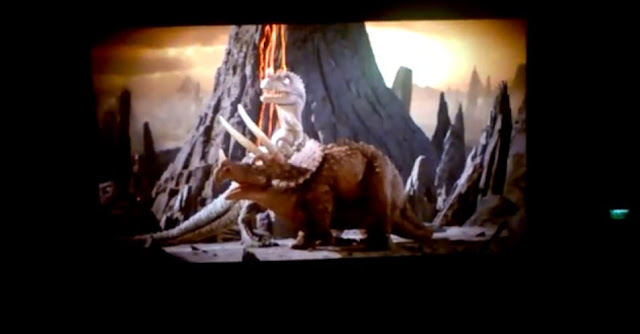 Early Man was released today here in Hungary, and I went to see it. It was good to have
some fun. Unfortunately there were only dubbed screenings, I have to wait a bit more to
see it with the original voices, to hear Eddie, Tom Hiddleston and Maisie Williams in it.