Filming The Trial of the Chicago 7 started in Chicago 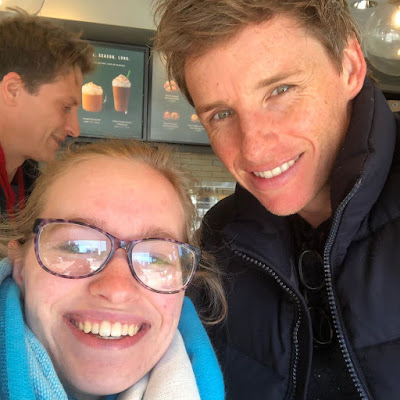 hailey_c_ posted this new selfie on Instagram: “Heading into work I get a text
from my boss saying Eddie Redmayne was in my store. She wasn’t kidding 😱”

Eddie’s in Chicago. The filming of ‘The Trial of the Chicago 7′ has begun on 14th Oct.
with exterior scenes. The true-story drama chronicles the trial surrounding seven
defendants who were arrested following anti-Vietnam War protests that took place in
Chicago during the Democratic Convention in 1968. Eddie plays Tom Hayden. (x) 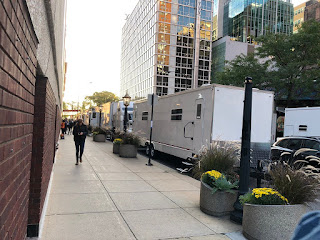 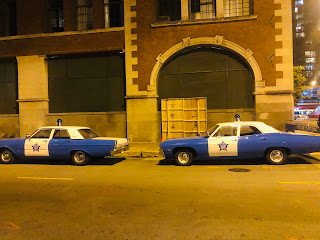 "maybe you can be an extra in the new Sorkin project about the Chicago 7 being filmed by a conference hotel. Hair, wardrobe and makeup are there." (@ajwms on Twitter)

Backstage reported: "The film’s camp has been set up all week at 30 West Polk St. near Grant Park, and according to the Chicago Film Office, the production will be in town through Oct. 23. ...Production will also head to New Jersey sometime over the filming process, so if you are in either area, be sure to keep an eye on future casting news. Francine Maisler is the casting director.

Akito Miyazaki @akito_miyazaki posted on Twitter: An upcoming film “The Trial of the Chicago 7” is filming right now! The most badass recreation of the 60’s Chicago ever! I have heard from someone’s friend that Seth Rogen was in it. If this is true, I would freak out!

Filming in Chicago @filming_chicago on Twitter: So if you were walking down the street today you might have been a little shocked to see large crowds of unruly hippies on the streets. Don’t panic the CPD has it under control, things will not escalate! 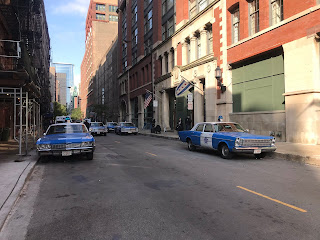 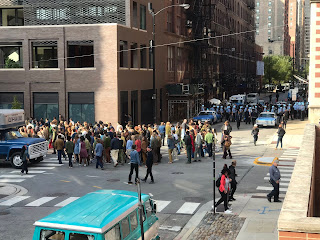 At the end of August Deadline reported that Paramount Pictures has agreed to
distribute the film in the US while Cross Creek has signed on as a co-financier and
producer alongside Amblin Partners. Frank Langella and Mark Rylance have joined
the cast as US District Court Judge Julius Hoffman and defense lawyer William
Kuntsler. They both worked with Eddie before. Frank Langella was his co-star in
the unaired HBO pilot ‘The Miraculous Year’. Mark Rylance worked with Eddie
in theater in 2002, he played Olivia in 'Twelfth Night', and later he portrayed
Sir Thomas Boleyn in ‘The Other Boleyn Girl’ movie.

Email ThisBlogThis!Share to TwitterShare to FacebookShare to Pinterest
Labels: news, Trial of the Chicago 7