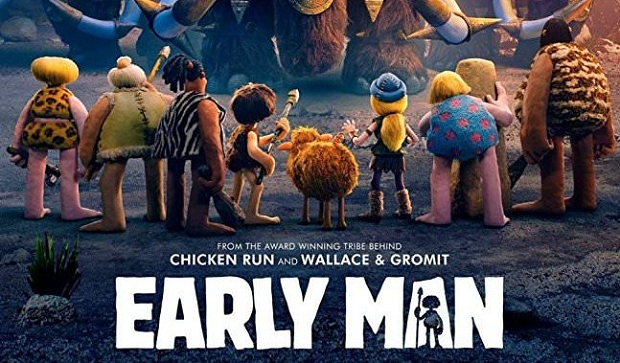 Another new short trailer from First News Live (via) from the
Industry Trust’s Moments Worth Paying For campaign,
which works hard to combat film piracy in the UK.


The trailer features new footage made especially for the campaign, including the characters,
plucky caveman Dug and his trusty friend Hognob using a tablet and visiting the cinema –
highlighting that whether it’s at home, on the move or in the cinema, a quality experience is
worth paying for. Movie stars the voices of Eddie Redmayne, Tom Hiddleston, Maisie
Williams and Rob Brydon. Aardman and STUDIOCANAL’S
Early Man comes to UK cinemas on Friday 26th January 2018


The Irish News: Early Man director Nick Park on how he picked the stars to voice his new characters:
'Park explained how he was inspired by Hiddleston ...when he showed off his mimicking skills on The Graham Norton Show in 2015... Park said: “I saw Tom doing Robert De Niro impressions on Graham Norton…then I
bumped into him a couple of times and he agreed to do it" ... he was drawn to Redmayne after watching his
“self-effacing and unconfident” portrayal of novice monk Osmund in Black Death (2010) and was struck by
Williams’ ability to be “versatile and funny” when working on Game Of Thrones...The creator of Shaun The
Sheep and Wallace And Gromit also flexed his own acting muscles for the movie as the voice of Hognob,
porcine sidekick to lead character, Dug (Redmayne)...' - Full article