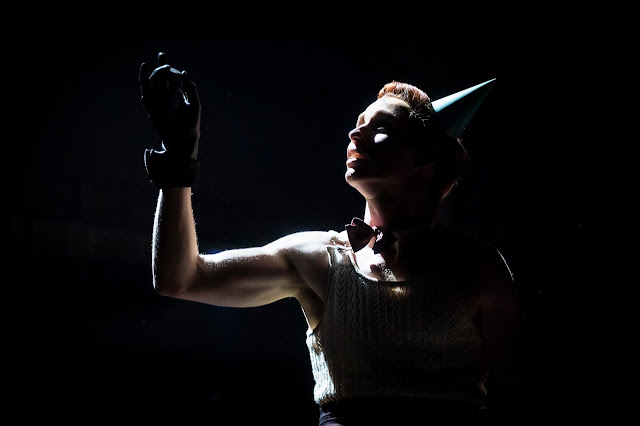 The first photo of Eddie in costume as the Emcee.
"We’ve never heard a more raucous standing ovation like it in many decades of theatregoing..."
wrote Neil Durham in his review.
Photos by Marc Brenner - he posted on Twitter yesterday:
".Wilkommen to #Cabaret which begins previewing tonight! The first three teaser
images of mine are out. And they really are teasers - the visual surprises you
have in store should not be spoilt! What a thrill to shoot it..."
More reactions from Twitter:
James Lee @jamessflee: "A very special evening watching the opening night
of Cabaret - Jessie Buckley and Eddie Redmayne lead the cast in a powerful,
moving demonstration of the vital importance of theatre, and of theatres."
Sophie Waghorn @Sophwag. "Well @kitkatclubLDN is incredible! The moment you
enter you are transported to the KitKat club in Berlin in 1929. The cast are amazing,
#EddieRedmayne fully embodies Emcee, he’s a completely unrecognisable and
he steals the show. I loved watching him perform. Also he’s COSTUMES😍"
"I would bet anything that @kitkatclubLDN will win a few @OlivierAwards  and
will be transferred to Broadway with #EddieRedmayne and #JessieBuckley." 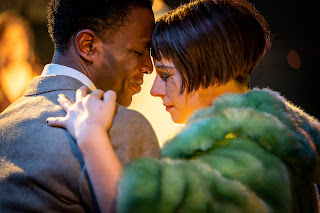 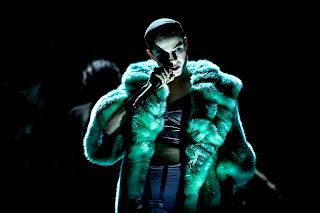 Jessie Buckley and Omari Douglas as Sally and Cliff
KAELI Kayleigh McKnight @ohhkaeli:
"I don't want to spoil anything... but @kitkatclubLDN is beyond anything I could
have ever imagined. Ferocious, sexy, ugly, angry, beautiful. GET A TICKET."
"Jessie Buckley gave the performance of her life tonight. I have never seen anything
like it. Her choices were so REAL. She showed the complete UGLINESS of Sally
Bowles and made us care for it. My god. I am in utter awe."
"and Eddie Redmayne creates this constantly evolving and controlling clown
that morphs and shifts as the story goes so beautifully.
He's part of the furniture whilst also being master conductor. It's magic"
"The entire company are just magnificent. I'm going to stop tweeting now.
But you will only regret not seeing this show. So do what you can to get a ticket
(I was in the upper circle and the view was unreal btw!) Just... WOW."
Olly Christopher @OllyChris: "Just seen first preview of
@kitkatclubLDN and it is EVERYTHING. Beautiful and ugly in equal measures.
Performances of a lifetime. Such an event"
"I’m in awe of Eddie Redmayne. His performance is out of this world.
And complete chills at Jessie Buckley’s Cabaret. Oh my" 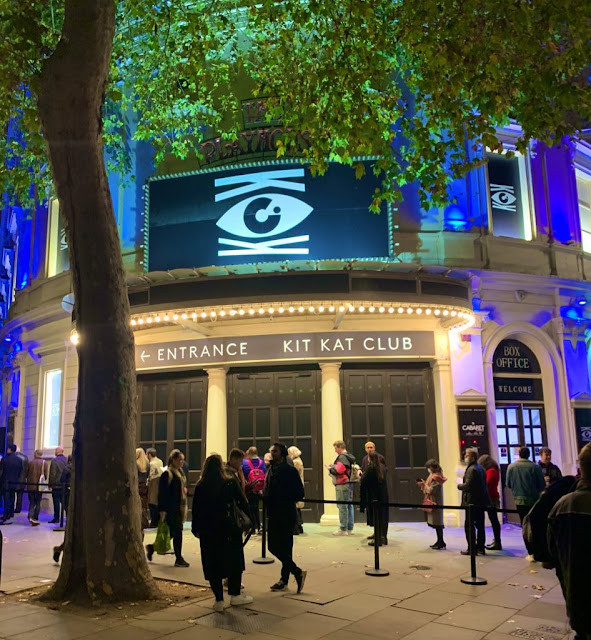 To Do List @ToDoListLDN: "Wow this raw Mahoghany clad Cabaret at Kit Kat Club
is such a breath of fresh air…"
"Jessie Buckley (Wild Rose) killed it as Sally Bowles making my spine tingle with her
gutsy, apocalyptic and soulful renditions of ‘life is a cabaret’ and ‘maybe this time’.
Eddie Redmayne is beautifully weird as Emcee."
Full review by To Do List (via)
"Eddie Redmayne is a simply outstanding, astounding Emcee – from his
very first appearance, he holds the attention like the brightest star in the sky,
and his commitment to the role is breathtaking." 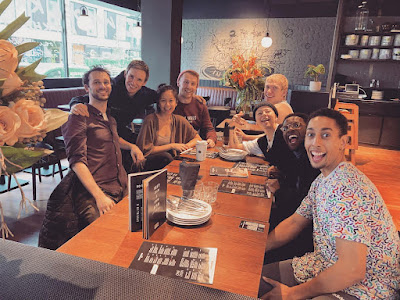 Eddie with some cast members in this group photo posted by Christopher Tendai (via)
Posted by Jutka at 5:34 PM