I was wellcomed in the Kit Kat Club

More than two years have passed since I traveled to London for the first time and had
a wonderful time with my friends at The Aeronauts premiere. I set off again last week
to visit the Kit Kat Club, where Eddie Redmayne is playing the Emcee in Cabaret. 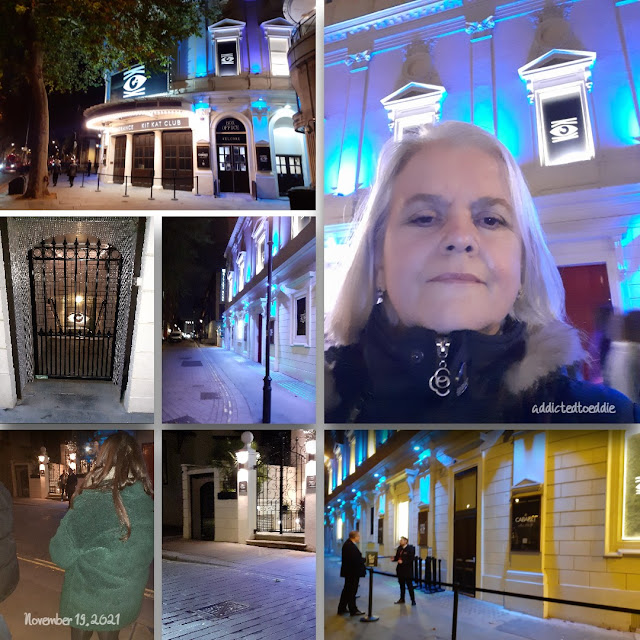 I had a ticket for Friday (19 November). Before we entered the Playhouse Theatre
through the stage door, we were asked not to spoil the experience for people who will
go to see the show later, not to take photos and videos inside. We got a sticker for our
phone camera. The place has a special club atmosphere. We were welcomed with
a pre-show and a drink.  The production design, the choreography, and the costumes
are amazing. There are no bad seats, the actors change their direction often, so you
feel, that their performance is at least as much for you as it is for the guests sitting
on the other side of the stage. My seat was in the stalls, not far from the round stage
in the middle, and one of the passages where the actors (including Eddie) walked
past a few times when they went backstage. He looked at me once, but I'm afraid
he didn't recognize me. We met only twice shortly and I no longer dye my hair,
I switched to my natural white hair color. 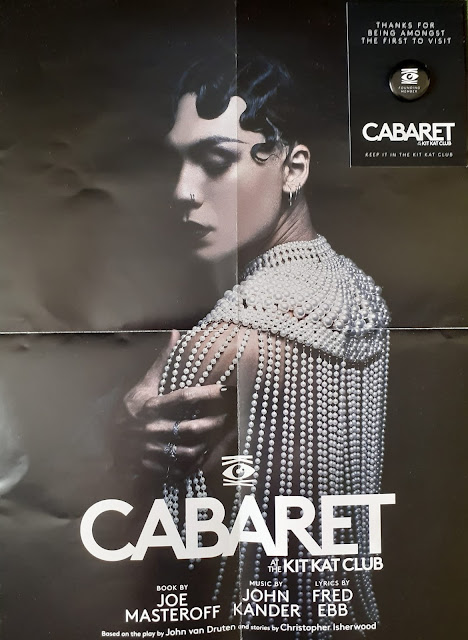 The brochure's poster and the badge we got in the theatre
This was the best theatre show I have ever seen.
Eddie was excellent in the role of the Emcee. It's incredible how he can
transform into the character he plays. I was blown away. This was very
different from his other roles. Maybe that's why he wanted to play it
again so badly. The shift of character towards the end was especially
interesting. The physicality of his performance was amazing. He was
very modest about his dancing skills in previous interviews, and
maybe he's not the best dancer in the room, but he can dance. 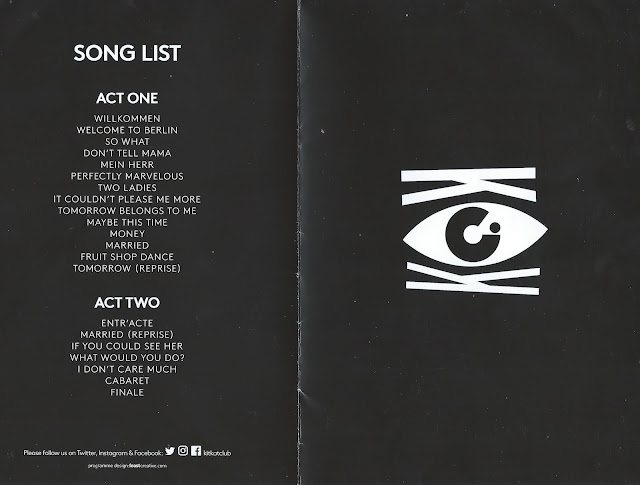 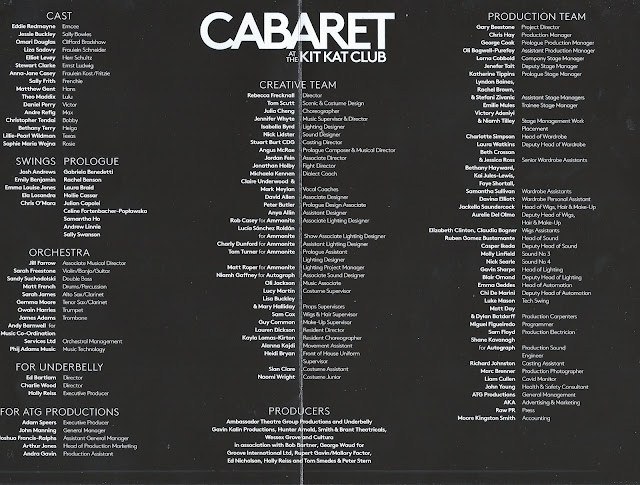 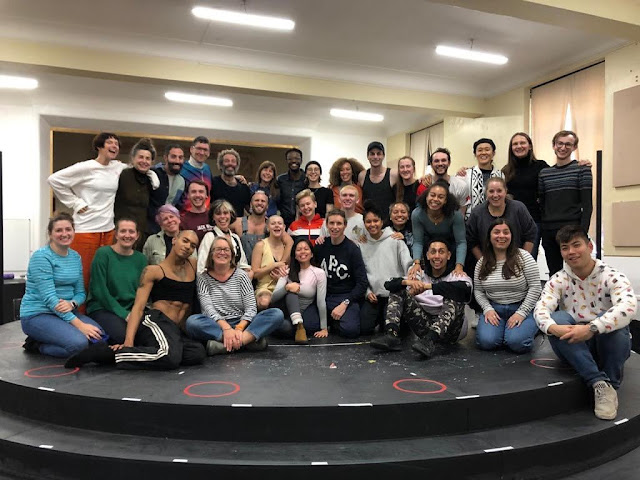 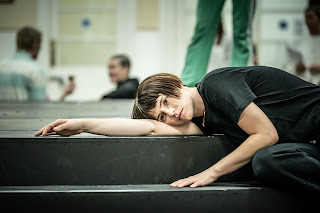 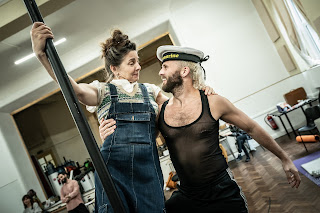 The rest of the cast was wonderful too. The most memorable performances for me
were Jessie Buckley (Sally Bowles) and Liza Sadovy (Fraulein Schneider).
WHAT'S IN THE CLUB, STAYS IN THE CLUB! 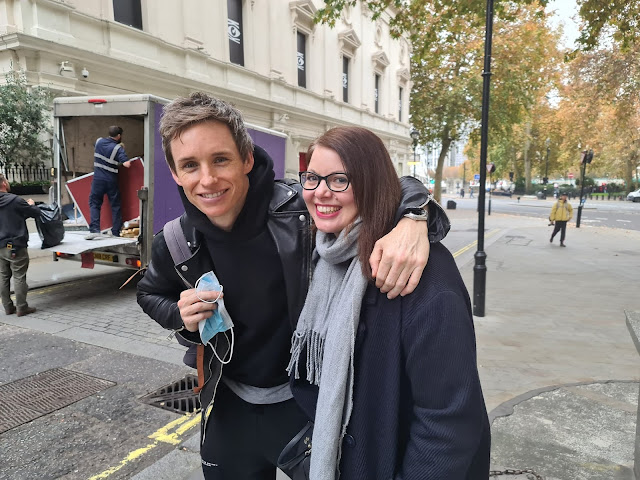 Thanks to Chrissie (Fb)(IG) who posted some new photos taken on Saturday. Eddie had known
Tracy and Chrissie were there, so he had come out to say hi and have a chat. They are fans
for more than ten years and attended several events. Eddie knows and really likes them. 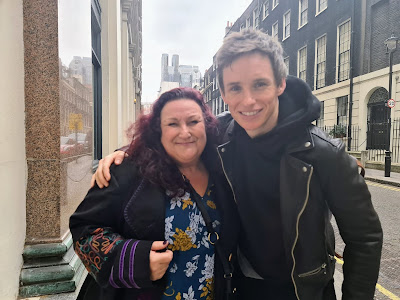 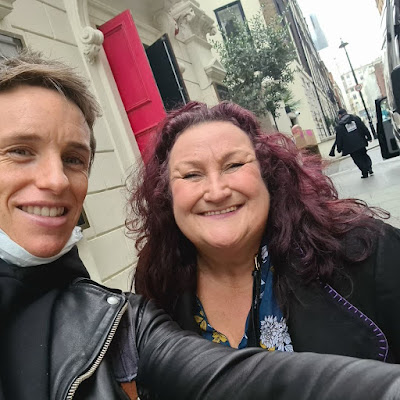 Eddie doesn't do stage door. Don’t expect him to stop for signing and selfies
before or after the play. Please be respectful if he says he can’t. It’s not because
he doesn’t want to, the theatre company just doesn’t want him to due to Covid.
Unfortunately, I couldn't meet him this time either.
P.S.: On my way home I stopped in Budapest at the 'Művész Kávéház' (Artist's Café)
on Andrássy Avenue. I updated my post about visiting 'Birdsong' filming locations
with a new selfie taken there.
Posted by Jutka at 6:59 PM