Eddie has been appointed OBE for services to drama in the Queen's Birthday Honours list.

Eddie Redmayne and Benedict Cumberbatch have both been recognised for their services to drama. Eddie is set
to continue his incredible year with an OBE, while Benedict has been named a CBE. Well deserved! Hello Magazine article about the honorees “With the exception of the British Empire Medal, the 868 recipients of awards ranging from knighthoods to MBEs will each receive their award personally from Her Majesty (or another member of the Royal Family) at an investiture during the next six months. Until then, and from today, they are still permitted to use their new titles and post nominals however won’t receive their insignia until their investiture.” (via)
More on the honors and a full list of recipients 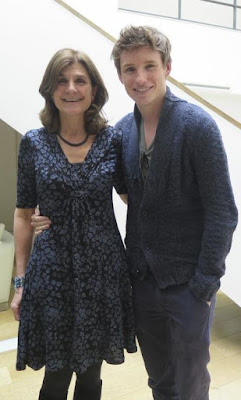 Congratulations to Eddie Redmayne who was made an OBE in the Queen's Birthday Honours list! pic.twitter.com/SMKAg5wmr4
— Working Title (@Working_Title) June 13, 2015

Stephen Hawking says he is 'doubly honoured' by gongs for Eddie Redmayne and Benedict Cumberbatch
They have both played Stephen Hawking in hit movies – and today they both join him on the royal roll of honour.

New BAFTA review video - Eddie speaks in the video from 0:34
Video: Are you a Breakthrough Brit? Apply for BAFTA's talent scheme!