Eddie talked about his upcoming projects and living life in lockdown
in the interview by Ruben V. Nepales published in Rappler and
in an article by Jane Susan R. Nepales on gmanetwork.com. 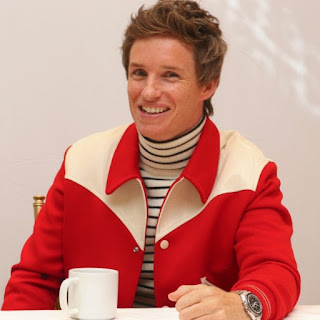 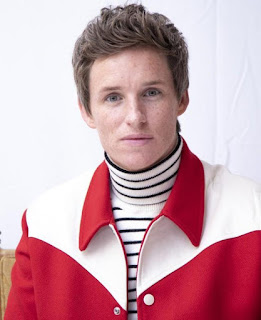 The photos were taken at TIFF last year
On returning to work and safety guidelines in filming Fantastic Beasts 3:
“We all went in with trepidation and going, what is this new normal
going to be?” “It’s exciting to be back and acting again,”...
“To Warner Brothers’ credit and our producers, they’ve made us feel
very safe. We are separated into bubbles. We get tested regularly."
“They have systems in place. They’re doing everything they can and
they’ve been great at making us feel reassured. We rehearse in our masks
most of the time until we’re shooting. But there’s still a vibrancy. Film
people – crews – love what they do. So everyone’s just thrilled to be back.”
The Batman, starring Eddie’s friend, Robert Pattinson, was also shooting
in the same studio until the latter tested positive for COVID-19.
“Rob was filming at Leavesden so I had seen him,” Eddie said.
“But again, protocols are in place so that the productions are all very separated.
So if someone gets sick, hopefully, it doesn’t come onto another production.”
On safety guidelines in filming intimate scenes in these pandemic times,
the Oscar and Golden Globe best actor winner joked, “There are probably
quite intimate scenes with some…fantastic beasts. You know, Yates likes
to get up close and personal. But not massively intimate scenes for Newt.”
On how he spent his free time with his family during the lockdown:
“It's astonishing,” he began. “I've been talking to my friends. Some of my
friends have managed to be staggeringly creative.  During lockdown,
they've written scripts, music. I have two children who are 4 and 2
(laughs) so Hannah and I have full lives. We have been in the
countryside. We have chickens, a vegetable patch. We've been
trying to grow our own food and be as self-sufficient as we can.
“But a friend of mine put it very beautifully, which is, we're in an
incredibly privileged position to have a home, to be healthy and safe
but also getting to see, for example, Iris, my daughter who is 4, and
had just learned the letters of the alphabet. I actually would do classes
every day with her like in school. “I got to teach Iris to read. To be there
for those moments or to listen to Luke whose vocabulary is spilling out
during lockdown, it's been a treasured moment in some ways.”
And picture Eddie tinkering around in the kitchen or painting with brushes
and palettes. “I love cooking so I'm doing a lot of that. I've been doing a bit
of painting. I'm a very shit painter. I used to love doing it when I was younger.
I've never really had the time since work got crazy so I've gone back to that.”
On The Trial of the Chicago 7:
“While we were shooting in Chicago, there were protests going on,”
Eddie recounted. “Gentle protests but I think none of us knew quite how
eerily relevant the film had become. But for me, the fact that in '68, '69,
there was the flu pandemic. There was a former vice-president running
for President. They were protesting the Vietnam War. They had the Civil
Rights Movement, the Women's Rights Movement, the Stonewall Riots
so there are so many similarities that have come tumbling forward
obviously with the Black Lives Matter movement.
“Since we made the film, as Aaron said, it's like the film just became
scarily pressing.  I hope the urgency of the film reminds us that, in
some ways, we've evolved, but in many ways, we haven't.” 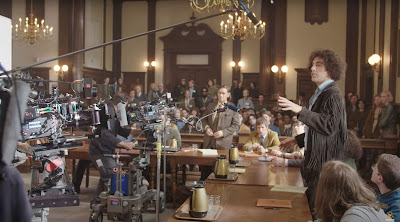 (x)
Did portraying Tom Hayden make you more determined to be more of an activist?
"I think, it’s an incredibly complicated question that, and one that I still honestly battle with
on a daily basis. Because of the world we live in now, people in the public eye who may
have no association with anything political, are given a voice that is perhaps unbalanced.
I believe that, of course we all have our own thoughts, we all have our own causes and
beliefs that we are deeply passionate about, and I think that one of the great gifts about
being an actor and people getting to see your films is that your voice can be amplified.
So with that comes a wonderful thing in the sense that when there are things that you
believe don’t have enough attention, you can try and amplify it.
At the same point, you have to be careful, because of course you come from a place
of great privilege and there is this kind of, we are very lucky if you are a working
actor, you live a good life and you have to be careful that you don’t end up playing
through your own, you end up basically looking elitist and for basically sort of
undermining the cause that you are passionate about. So my question to myself
continuously is what are the things that are important to me?
I try and be an activist in my own personal way, for example here during
lockdown in the United Kingdom, people with motor neuron disease, like
ALS, weren’t put on the extremely vulnerable list, which was a list that
allowed various special treatment I suppose with regards to care and with
regards to getting food. And I found that quite shocking.
So the way that was for me, was writing our local constituency politician, and
I threw the motor neuron organization that I work with, I am a patron there and
I was getting on cross party Zoom calls to discuss why this was happening.
So I try to do it at a place that is I suppose a grassroots level.
That being said, there are times when communities don’t have a voice that is as amplified
as yours and I feel it is important in those moments just to speak up. I am still trying to
work out on a daily basis what my role is.  And it gets confused for people in the public
eye because our voice is often louder than most people’s because of that amplification."

Check more interviews on my YouTube video playlist below:

Eddie on being cast in an Aaron Sorkin movie:

"Quite often as an actor, you get asked whose on your bucket list and I always said
there is only one and it is Aaron Sorkin. I was obsessed with the West Wing, as most
the world was, so when this script arrived... I think I called my agent before I read it
and said yeah I'll do it, and he said I should probably read it first!"

On working with Mark Rylance again:

"I played Viola in 12th Night. He literally gave me a career, honestly, I got an agent
through that. Working with him (now) and getting to spar with him in the latter end
of the film was literally extraordinary."

On whether he called Jane Fonda to ask about Tom's personality:

"I like the way you put that like, just catch up with Jane Fonda, like hey Jane!
I didn't speak to Jane, the way I went about it was I just read everything I could.
He has this sort of inherent charisma without pushing."

Trailers and clips
I can't wait for the 16th of October to watch the movie on Netflix. 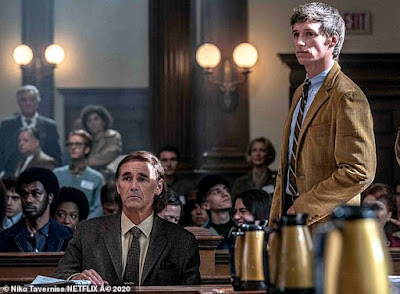 Eddie Redmayne is ready to stand up for his rights in blistering courtroom drama
The Daily Mail  Article by Baz Bamigboye about The Trial of the Chicago 7 and more
Excerpts:
"Since filming completed nine months ago 'it's become more eerily relevant,
day by day'. Not only are we seeing 'mirror images with what took place
in 1968 and 1969' but 'there was also a flu pandemic' (Hong Kong flu).
Redmayne said he was moved by something Fonda wrote about Hayden
at the time of his memorial in 2017, a year after his death. 'She said he
whispered to her, the day before he died, that seeing people willing to die
for their beliefs changed him for ever.'"
"Redmayne stressed that he had never taken a role for political reasons.
'I was compelled by the stories,' he told me. 'Similarly with this,' he added
of The Trial Of The Chicago 7, which Netflix will screen from October 16.
Which does not mean he doesn't have political views.

'I'd just rather focus my attention on what my job is, which is
telling stories,' he said. 'If those stories can have an effect and
shift people's opinions ...' Well, then, he's happy.

Like Hayden, he's aware of the 'ramifications' of taking action.
'Speaking out can end up doing damage to the things you
believe in, rather than helping,' he said. 'What I try to do generally
is keep my head down.' But not always. For instance, he was
angered that people with Motor Neurone Disease weren't put
on the extremely vulnerable list during the pandemic. Another
thing he stood up for was transgender rights, making a
statement in support following comments by J.K. Rowling..."
"He said he has many 'trans friends and colleagues' who are
having their human rights challenged around the world and
facing discrimination on a daily basis'.
Though he disagreed with Rowling's comments on the issue,
he was alarmed by the 'vitriol' hurled at her on social media,
which he termed 'absolutely disgusting', and which prompted him
to write her a private note. However, Redmayne felt that the
insults to trans people on social media are 'equally disgusting'.
He said: 'Similarly, there continues to be a hideous torrent of abuse
towards trans people online and out in the world that is devastating.'"
I point out, that Eddie is still against J.K. Rowling's views. He expressed
his sympathy and support of trans people multiple times here as well.
Based on misleading media responses to this article many people turned
against Eddie. I think most of them didn't read the original text. Bullying
and abusing another human being is never OK, and it also harms
the cause they are trying to support. I fully agree with Sonja on Twitter:
"People on the internet, please do not hop on a bandwagon and think
before you tweet. It’s so easy to get manipulated and headlines can be
awfully misleading... Some comments on here are truly disgusting.
Don’t spread hate.
That’s all Eddie Redmayne was trying to say as well."
Eddie will be a guest in Today Show Starring Jimmy Fallon
on Thursday 8th October.