Eddie and Hannah stroll on the beach in St.Tropez this weekend Eddie took his bride on a sun-soaked trip to Saint-Tropez. On the beach he wore one of his favorite Thom Browne shirts with white short, Hannah wore a silk navy EQUIPMENT Earl Star Print Romper. Eddie arrived to the Cote d'Azur a few days ago, he photographed with fans on Thursday in Nice and on Saturday in St.Tropez - Related tumblr posts
Eddie and Hannah married in December, but they have to cut their honeymoon short because of the awards season events. Eddie said in the Ellen show in January: "We went skiing over Christmas. We went to the Alps, which was such a beautiful idea, but unfortunately there was no snow. But that was just an excuse to take long lunches, drink
a lot of red wine, and have a lot of fondue."
Eddie said in the winner's room after his BAFTA win: "I'm making this film, and then the plan is to go sit on a beach somewhere with Hannah as she certainly deserves it," smiled Eddie, before adding, "I'll get more freckles." (video)
Finally they are on holiday, they can hang out on the beach a little. Eddie was busy in the first half of the year. He
filmed 'The Danish Girl' (release date 27 November, 2015) and he lent his voice to Ryan, the new tank engine in
the new Thomas & Friends animation film 'Sodor's Legend of the Lost Treasure' (in cinemas from 17 July, 2015).
Eddie seems thoughtful to me in these photos. I wonder what's on his mind. He starts filming 'Fantastic Beasts And Where To Find Them' soon. I don't know anything about the exact timing yet. 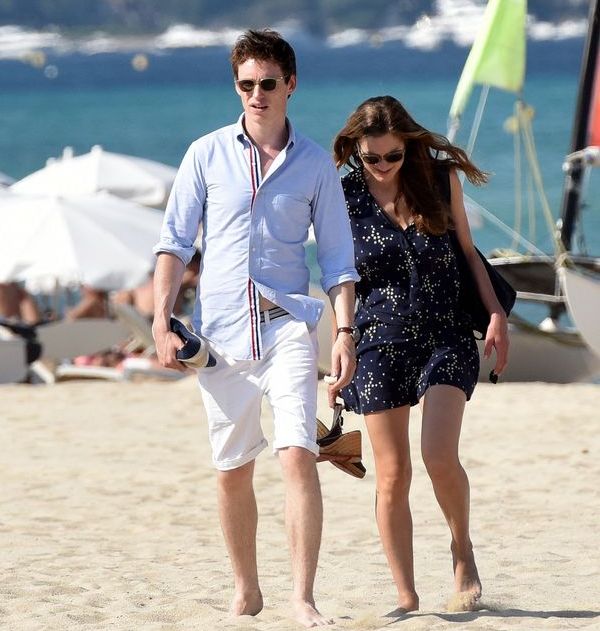