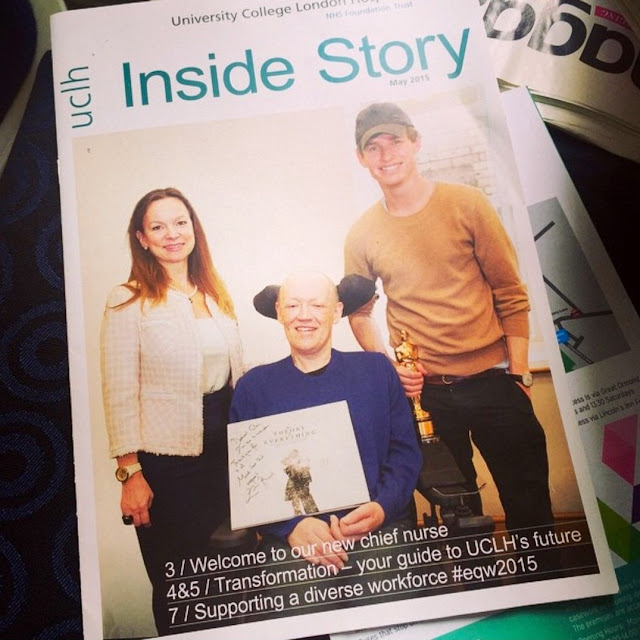 .Eddie Redmayne visited the MND patients who worked with him at a London clinic
to portray Stephen Hawking authentically – and brought his Oscar. (x) via

Here is the story of how Mr. Phillips was one of those who allowed Eddie to study the effects of MND.

Reported by Katrina Turrill, published in Watford Observer on 9 Feb. 2015:
BAFTA-winning Eddie Redmayne visited Bushey man Glenn Phillips to research his role for The Theory of Everything
A man from Bushey who was diagnosed with motor neurone disease in 2011 said actor Eddie Redmayne was "personable" and "sincere" after the star met with him to research his role for The Theory of Everything.
Just as unpredictable as the disease which affects neurones in the brain and spinal cord, causing loss of mobility, speech difficulty, swallowing and breathing, Glenn Phillips' meeting with award-winning Eddie in August 2013
was unexpected.
Mr Phillips said: "I was at an appointment at the hospital (National Hospital for Neurology and Neurosurgery in Queen Square, London) and he was there with his choreographer seeing what people with the disease were like, first hand.
I didn't know he was going to be there.
"He spent about an hour and a half there, and he talked to specialists too about the disease, to hear the more technical sides. He spoke to me and asked me when I first got the disease and what my first symptoms were. I showed him my hands, because that is how it first started for me - he was very keen on how my hands worked." Less than two weeks later, Mr Phillips received a call from Eddie saying he would like to come and visit him at his Bushey home.
"He came up with the choreographer and stayed about three hours. He was really doing his research - he was seeing as many people as he could - and he was particularly interested in the early stages of the disease which I had at the time," said Mr Phillips.
"The film takes you from when Hawkings is first diagnosed, right through to the later stages of the disease, which is why it was important to research the early stages."
According to Mr Phillips, Eddie was most interested in how he walked, how he used his hands and how he wrote, watching him in "really close detail".
He said: "Eddie was very personable, very respectful, very thoughtful and sincere. That became more apparent in the future months, because he kept in touch."
Mr Phillips was invited by the actor to join him at the UK premiere of the film in London, which was held on December 9.
However the specialised taxi which had been ordered to take him to the premiere failed to turn up.
"So I couldn't go," said Mr Phillips. "But he was very kind and thoughtful after that. He organised a private screening for me and my family and friends - between him and Universal - in London."
Mr Phillips' private screening was on January 12, but unfortunately Eddie was unable to attend because he was in LA at the time. He said: "I was really looking forward to meeting him again, so that was really sad, but I think that was the day he received his Oscar nomination."
Just last night, on Sunday, February 8, Eddie scooped the Best Actor prize at the BAFTAs, and a few weeks earlier won a Screen Actors Guild Award.
Mr Phillips described The Theory of Everything as a film very different to anything he had seen before.
"I was riveted by his performance, it was quite extraordinary the way he contorted his body. It was authentic, it was quite amazing. I thoroughly enjoyed the film, but it was also difficult to watch, particularly when Hawking was diagnosed - that brought back a lot of painful memories."
Mr Phillips has not heard from Eddie since the screening.
"He's been rather busy during awards season," he said.
"But what impressed me the most about Eddie was he was very affected by the condition, and I could see it was a genuine concern of his. He was very good to understand the disease, not just for his role, and that is something very genuine about him." 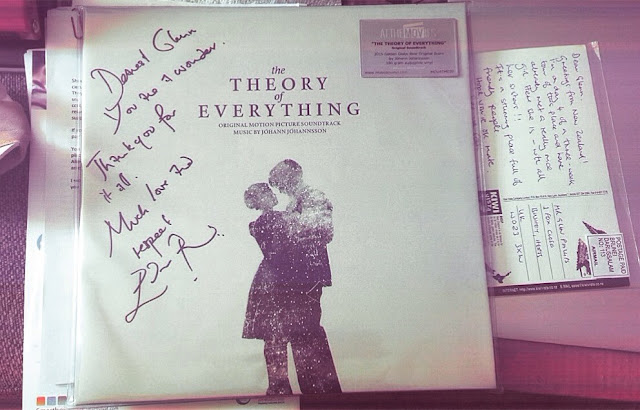 abbyphillips-photography: Again an images taken on my broken phone camera. A signed Eddie Redmayne
album as a thank you gift to my uncle for allowing him to shade his life to understand the struggles of MNDA
(via bespokeredmayne)

VOX: A neurologist explains how she helped Eddie Redmayne play Stephen Hawking
...To prepare for the role, Redmayne had four-hour coaching sessions with Alexandra Reynolds, a Hollywood choreographer who also helped come up with the movements of the zombies in World War Z.
He also worked with Katie Sidle, a consultant neurologist at the Queen Square Centre for Neuromuscular Diseases in London. Sidle recently spoke to BMJ about what it was like helping Redmayne prepare for his role. You can listen to the recording below.
Redmayne and Sidle studied photographs of Hawking in various stages of his life to track the progression of his illness. Based on their findings, Redmayne created a chart intricately tracking the progression of Hawking's illness, which allowed Redmayne to know precisely what Hawking's physicality was at each particular moment of filming. The chart tracked the physicist's progression from one cane to two canes, to a wheelchair. It also tracked the dystrophy of his musculature, and his transition to an electronically provided voice. - full article here