Fantastic Beasts, the most preordered audiobook ever

The audiobook edition of “Fantastic Beasts and Where to Find Them” was Audible’s most preordered title ever,
the company told MarketWatch. Mind you, this audiobook, which goes on sale Tuesday, is not even a reading
of the screenplay of the hit 2016 movie, but rather the alphabetical encyclopedia of magical creatures, from
Acromantula to Yeti...it's a remarkable achievement for Eddie. (via)

Video sample from the audiobook - my gifset on tumblr

Time magazine released another sample from the audiobook, the part about the Golden_Snidget (via) 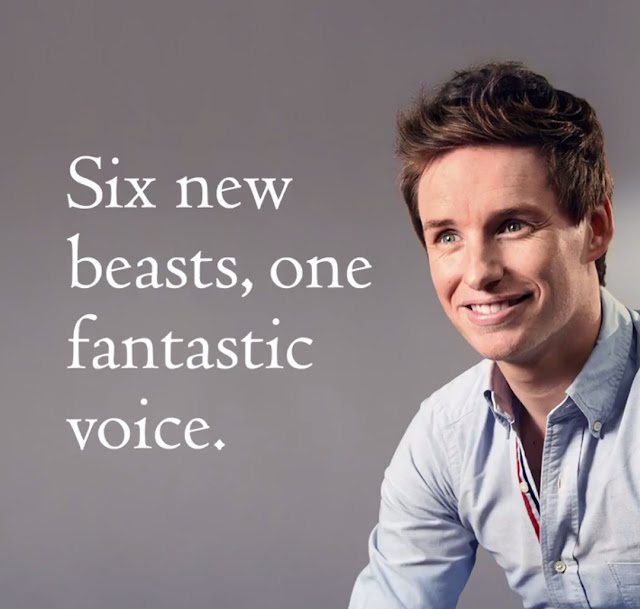 Promo of the Fantastic Beasts audio book narrated by Eddie Redmayne. (via bespokeredmayne)
Video: Brief promo from Pottermore
The release date at the end is wrong, the correct date is March 14, 2017
You can order a copy too here


Description of the thunderbird from the book read by Eddie Redmayne

You can listen to the part about the Basilisk here...
Related tumblr posts

tvovermind: Eddie Redmayne Reading “Fantastic Beasts” Is Soothing to the Soul
...There are a number of actors out there whose voices were just made for soothing us to sleep or putting
us in a comfort zone that we’d want to stay in forever. Morgan Freeman is usually the voice that always
comes to mind, but there are others out there with their own unique sound that could even make us adults
feel like children. One of those voices is Eddie Redmayne.  Pottermore has just released a digital audiobook
version of J.K. Rowling’s Fantastic Beasts and Where to Find Them, and it’s narrated by everyone’s favorite
beast-smuggling wizard himself....
While his voice isn’t quite as soothing and regal as a Morgan Freeman, if you lie down while listening to this
it’s hard not to fall into a hypnotic trance and just lay there, still as a statue. In fact I think I’m going to have
to take a nap right now. I wish Eddie Redmayne could read me bedtime stories every night. Is that weird?
Perhaps, but it’s still true.

Pottermore: Eddie Redmayne on recording Newt Scamander’s life work
...‘There was one line in the original script of the film, in which Newt says: “I’m not sure that anything that occurs
in nature can be unnatural.” The line ended up not being in the film but I always used it as my way of re-finding
Newt’s voice. That was my way to get back into his skin today.’....