Eddie arrived back in London on Wednesday Feb 4, 2015 - airport photos His flight cancelled because of the bad weather, so Eddie Redmayne couldn't
travel back to London on Monday night. He arrived home on Wednesday.
Here are a few photos.

Eddie Redmayne shows off his handsome smile as he arrives at LAX Airport with
a single suitcase in hand on Tuesday afternoon (February 3) in Los Angeles.

The 33-year-old The Theory of Everything star was getting ready to head to security before catching a flight out of town.(x)

Below: Eddie Redmayne arrived at the Heathrow  (x) 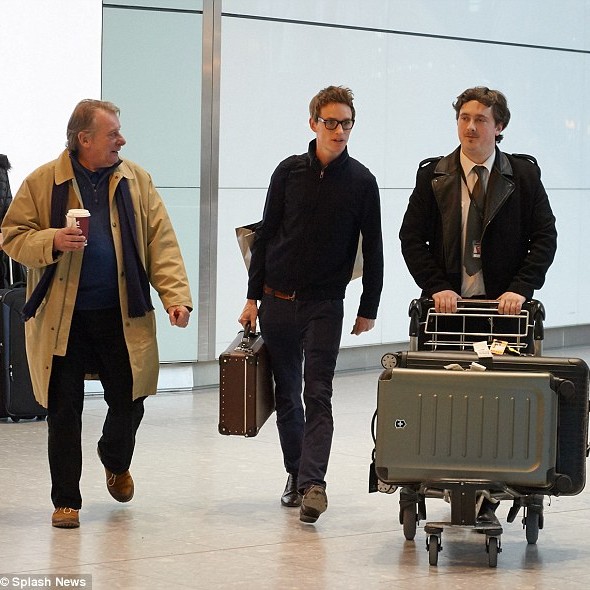 Eddie Redmayne is back in London, sporting specs and jazzy red socks. Shots at Heathrow Feb. 4, 2015. (via)

Daily Mail: Looking specs-y! Eddie Redmayne is handsome in thick-rimmed glasses as he arrives in London ahead of the BAFTAs
He's the toast of movie awards season.
But despite his huge success this year, Eddie Redmayne is still as down-to-earth as ever.
The British actor cut a very handsome and suave figure as he arrived back in the UK at London's Heathrow airport on Wednesday, making a low-key entrance before he appears at the BAFTA Awards on Sunday night.
The 33-year-old travelled without his new wife Hannah Bagshawe, and was alone but for a male companion.
Not often seen with his glasses on, he looked rather fetching in his wide-brimmed spectacles as he carried his beloved brown vintage suitcase through the terminal, showcasing his effortless charming flair.
Keeping it casual and comfortable for his journey, he emerged from his long-haul flight from America wearing a pair of blue slacks, a dark navy zipped-up bomber jacket and a pair of smart brown lace-up shoes.
And he also hinted at his good humour by offsetting his pared-down appearance with a flash of his bright red socks.
He appeared in fantastic spirits as he made his way out of the airport, looking as dapper as ever despite his casual attire.....
Read more