Daily Mail: Eddie Redmayne is effeminate in a cinched in suit on the set of The Danish Girl as he continues his transgender transformation
He's pursuing his dream of portraying 'interesting characters'.
And they don't come much more fascinating than Lili Elbe, formerly Einar Wegener - the first known person to have gender reassignment - for whom Eddie Redmayne is undergoing a transgender transformation.
Eddie, 33, was captured on the set of The Danish Girl on Tuesday, putting an effeminate touch into his stride wearing a pink cravat and belted suit. After the first picture of Eddie emerged as Lili, in full make-up and curls, it looked like Eddie was dressed as an early Einar on Tuesday. His auburn tresses featured a light curl but it was short to reveal his chiseled features when he walked onto the set....
Eddie is reportedly on a strict diet to help lose weight for the role this spring...
'If your dream is to tell stories, interesting stories, play interesting people, then I have been incredibly lucky to portray Stephen and Lili,' Eddie justified. 'They are both extraordinary people and as an actor it doesn't get better than that.'...
There's been plenty of preparation for the role on Eddie's part, and like his last role where he had dance training to better understand the human body, Eddie has been doing his research well.... The caption of the second photo is faulty in the article, the shoot was in Brussels, not in Berlin.
According to this casting announcement and an rtbf.be article they still shoot in Brussels Today.

Eddie looks lovely in pink and cream as Einar Wegener on 'The Danish Gitl' set.
The film will move on from here to other European capitals, including Berlin, London and Copenhagen.(x) Eddie Redmayne on set in Belgium filming The Danish Girl (via) 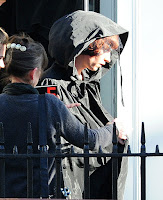 Thanks for the translation of the rtbf.be article to bespokeredmayne:
Eddie Redmayne, Tom Hooper film The Danish Girl in Brussels

The recent Oscar winner, the British Eddie Redmayne is currently shooting in the streets of the capital.
Cinema, Brussels, shooting
The title of the film: “The Danish Girl” by Tom Hooper. The cast include one that just won the Oscar for Best Actor (Eddie Redmayne) for his role as physicist Stephen Hawking in “The Theory of Everything.” Filming top secret but for which we still able to get some information.
Today, the famous brewery windows “Sudden death” in the center of Brussels, are overshadowed by large black tarps, carriages and extras dressed in the fashion of the 20’s waiting on the pavement of the street Mountain the vegetable Herbs.
The British filmmaker Tom Hooper, Oscar winner for his film “The King’s Speech”, rotates inside the plans of his new film, “The Danish Girl”.
The film tells the love story of a couple of Danish artists Einar and Gerda Wegener. Einar become Lili, and will remain in history as the first man to have undergone a sex change operation in 1930.
Eddie Redmayne seems to like challenges: having played the physicist Stephen Hawking suffering from the paralyzing disease Charcot, now he plays Einar Wegener.
The cameras of director Tom Hooper settled in Brussels for five days, in places like the Horta Museum or Galeries St. Hubert. The release of “The Danish Girl” is scheduled in November on American screens.
/Hugues Dayez/

A funny story in National Enquirer. Maybe it's just a fiction, but very amusing.(x):
“AFTER eyeballing a mind-blowing photo of Oscar winner EDDIE REDMAYNE looking (GASP!) gorgeously girly-grrrl as a flame-haired cross-gender cutie in his flick “The Danish Girl,” I scooped a titillating tale of his shocking after-hours fun with femme co-stars AMBER HEARD – JOHNNY DEPP’s new bride – and ALICIA VIKANDER!
“Said My Danish Spy: “Everyone teased Eddie that he was the hottest ‘girl’ on the London set, so Amber and Alicia bet him that while dressed in women’s grab, he could NOT pick up a man — AND get him to buy drinks! But Eddie bragged he’d have guys panting! So the girls went first, boarded the office elevator, nailed ‘dates’ before hitting the ground floor, waited at a nearby pub for challenger Eddie – then nearly fell off their bar stools when Mr. Star – wearing 1920s flapper drag – waltzed in with a handsome young stud who looked like BRAD PITT on steroids! The girls shrieked as happily-married ‘Reddie’ confessed to his ‘date’ that he’s really a man!
“Responded Hunky Guy: ‘I don’t CARE!’”
Posted by Jutka at 10:55 AM