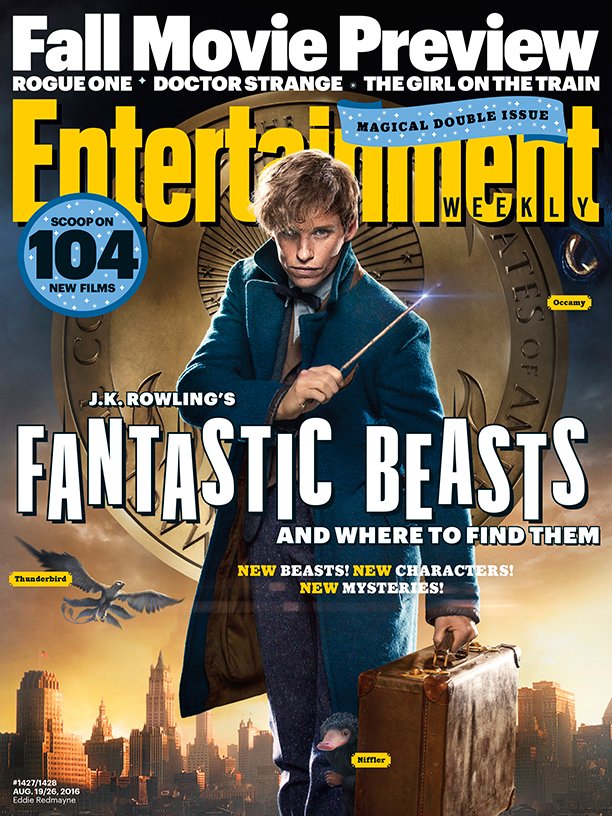 EW posted Fantastic Beasts scoop every day leading up to the reveal of the annual Fall Movie Preview issue this week.
Fantastic Beasts is going to be far more than just a magic-filled beast-chasing romp through Roaring Twenties Manhattan – the story is more dark and topical than you might expect. As costar Alison Sudol puts it: “There’s all kinds of things going on in our world right now concerning immigration and tensions between different groups. There’s a lot about segregation in this film, a lot about fear of the ‘other.’ These creatures, who the world sees as ugly, dangerous or weird, Newt has such love for them, and through his love we fall in love with them. J.K. Rowling has tapped into really deep and pertinent issues.” Plus, we learn how Redmayne mastered his wand, Rowling’s reaction to seeing the film for the first time, how a key beast was created, and more. (x)

James Hibberd interviewed Eddie for EW.
He was asked about:
When did he first hear about the project, and
what's his favorite Harry Potter film and book.
After his prestige roles, was going to a big,
broad audience vehicle like this attractive or no.
Did Rowling help with anything specific.
He was asked about Newt's favorite beasts and
if he has a least favorite, and how many beasts
does he keep in that case.
Eddie revealed what Ralph Fiennes said to him about David Yates and who’s the one person from the Harry Potter universe that he would like Newt
to meet.

Eddie about Newt:
He’s a man with a passion, and his passion is animals. His mother bred hippogriffs, and it’s the world he’s most comfortable in. He’s not particularly comfortable with human relationships. He’s comfortable in his own skin, but he disconnects with people. People seem to misunderstand him, and he doesn’t know why, but he’s also not particularly interested in why. He has his own relationship with his animals. As for the special powers. he’s not an astounding wizard. He’s capable. He’s used to being physically capable when dealing with animals.

About his preparation for the role:
I had a few months to prepare. I had never done a film of this scale, and I don’t have a particularly lot of imagination, and there’s a lot of interaction with animals and fantastic things and working with puppeteers. How does one go about prepping for that? Going out to these amazing zoos, to parks, and going into cages with animals and meeting their keepers and hearing what their lives are. I spent a day or two with a gentleman who lives in the forest, and tracking is his thing. And it’s about using all of your senses — from smell to sight to peripheral vision to sound — and knowing things like using plants for antidotes. Also, when you are tracking animals physically, he was showing me this thing. [Redmayne demonstrates planting his feet starting with the side of shoes first.] It created this slightly open gait that Newt has.

What does Newt think of America?
When he first arrives in New York, you see him walking down the street, and the way he’s observing the city is the way that he would observe a natural habitat. He’s kind of smelling it; it’s as if he were in the jungle. It’s totally alien to him to see somewhere that’s filled with such vibrancy and people. The 1920s has a prohibition quality, and that’s been put into magical terms — but I don’t want to give too much away.

How was working on such an effects-driven film?
I’ve done CGI films where the whole world is green, and you have no context. What’s amazing is the amount of puppeteers or dancers or people you work with who will then not be there. There is a magic that you feel when the art department sends you 12 mock-ups of wands and you get to have a full-on discussion of what wand to have. It’s the stuff kids’ dreams are made of. The hardest thing was the months of prep of working with the visual effects department, talking to Jo [Rowling] and David [Yates] about what the specific relationships and characterization of all of these different animals so that Newt could interact with them with a kind of fluency that made you really believe in his love of them and his care for them.

When he was asked about the backstory, Eddie said: I would love to give you backstory, but that’s something
in which the Warner Bros. troops would shoot me for if I said anything. I can’t talk about that, I’m afraid.

He revealed Newt's favorite spell:
There’s one which basically stuns someone and sort of makes them kind of go almost statue-like. Shooting that, there was the most brilliant stuntman doing it, and he literally goes from fully standing to falling like a log and smacking on the ground and, I just couldn’t believe that he didn’t break his brain.

About what he thinks that fans will be most surprised by in this film:
One of the things that I found quite extraordinary about the script when I read it is that it’s there are moments
that feel like a thriller. There is a dark aspect to it. There is a kind of comedic quality to it, and sort of romance.
We have all these different genres, and yet somehow J.K. Rowling has managed to weave them together.
I think it’s surprising about how moving it is. All I have when I read scripts is that instinct, and I was really
moved by it. So that should hopefully be surprising. And now I just ruined the surprise [laughs]. 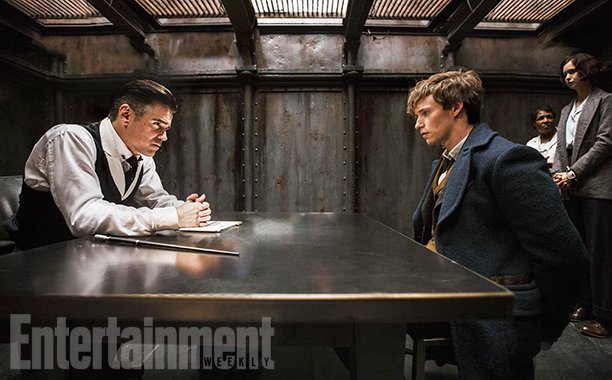 (x)
Is there romance in the film? According to canon, Newt has a destiny with Tina (Katherine Waterston)…
Newt’s been damaged by human beings, and at the beginning of the film, he’s someone that’s pretty content in his own company and the company of the beasts. He enjoys his solitude, and he’s also spent a year out in the field.
So he really hasn’t had to deal with people. And when he arrives in New York, there are more people than he’s ever imagined. Certainly at the beginning of the film when he meets Katherine’s character, there’s a great antagonism between them, and they’re both quite sort of naughty characters. We sort of know that ultimately those two in the Potter lore get together, and there’s this sort of central build of these two people who are outsiders finding each other. And there’s Jacob (Dan Fogler) and Queenie, there’s definitely a romance in the air there.

About where would he like to see Newt go in the sequel?
I was at [the studio] when it still had all the Tarzan set out, and I was like, “Can’t we just have a crossover here? Can’t like Newt swing through one of those?” It made me think that I would like to see Newt out in the wild. 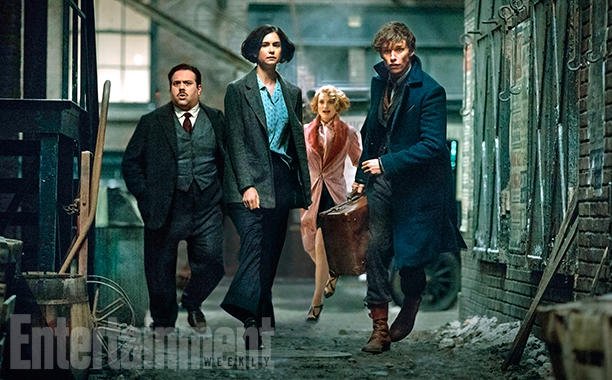 (x)
About what was his favorite trick as a kid?
My favorite trick was this coloring book that you would open the pages, and the pages would be blank, then
you’d then tap it with a wand, and you’d open the pages again and there would be like drawings, and then
you’d tap in with a wand again and then all of the drawings would be colored in. That was my favorite trick.
I bought it from a place from a place called Davenports Magic Shop and School. And it didn’t involved any
skill, it was just a proper old-school trick.

About his Pottermore house sorting:
You know what, I did the other day! And that would be really depressing for me to find out that like I’m not
actually Hufflepuff and then it sorted me with Hufflepuff. I literally was by myself at home and I yelped with
excitement that I got Hufflepuff. I was like, “the magic exists.”

Articles based on the EW interview: 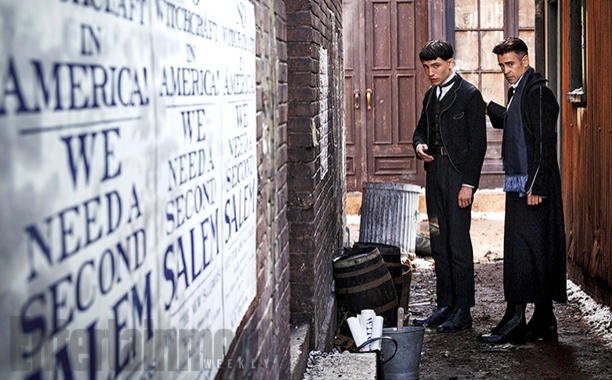 (x)
EW: Fantastic Beasts: First look at Ezra Miller's mysterious character
We’re finally getting a glimpse at the most mysterious lead character in Fantastic Beasts and Where to Find Them: the eerily named Credence Barebone. Played by Ezra Miller ... Credence is the adopted middle child of Mary Lou Barebone (Samantha Morton). We’re told that he “appears withdrawn, extremely shy and far more vulnerable than his two sisters. Credence is defenseless against the abuse that comes in response to the slightest infraction of Mary Lou’s strict rules. But his loneliness also makes him susceptible to the manipulation of Percival Graves (Colin Farrell), who has taken a personal interest in Credence.” Graves is a powerful guy, an auror and the Director of Magical Security in the American wizarding government. 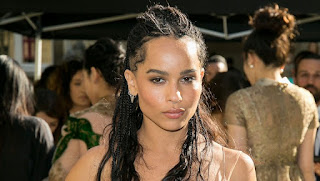 Sources say Kravitz, who was added after production began, has a small role in the first Fantastic Beasts film (which is now in postproduction) but there's the possibility for her to return with a meatier part in the sequel. Ahead of the first film's release on Nov. 18, Warner Bros. has already dated the sequel for Nov. 16, 2018.