Eddie Redmayne about his own extraordinary love story

Eddie Redmayne dishes more details than ever about his own love story.

...“It’s love,” he joyfully proclaimed about what led to the engagement. “We first met when we were 15. It took another 15 years for us to sort it out. She’s an incredible woman, very special. So the fact that she said yes was a huge deal.”
....“I was in a boys’ school and she was in a girls’ school. They were doing a charity fashion show. They brought some guys over. I will never forget I was this pasty boy with freckles. I had to walk topless in the show for this school of girls. As I walked off the stage, the entire school erupted [in applause because] the best-looking guy in the school walked on. It was a very scarring moment.”
...“But afterward at the party, I saw Hannah across the room. She was very beautiful, kind and very funny. [I learned that] we had similar interests, that she loved the arts, theater…all the things that were important to me.” 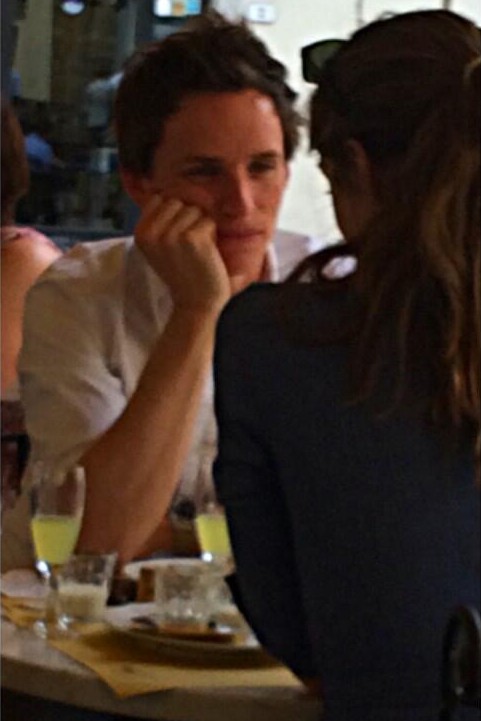 ...“When Hannah and I finally got together years later, I had finished rehearsing ‘Les Miserables’ and was about to start shooting it. I had four days off, I was going to Florence by myself—slightly sad.
“Hannah and I went on a date just before I was to leave. We had known each other for a long time, but not closely. I was like. ‘We had a wonderful evening. You wouldn’t want to go to Florence next week, would you?’ She was like. ‘That’s absurd.’ I was like, ‘No, no, no.’ She said, ‘You don’t mean that.’ I was like, ‘I do.’
“The next morning, I sent my easyJet booking form to her. She let me stew for a few hours, and then she sent back her easyJet booking form. So our first proper date was in Florence, and that felt quite crazy.”

Photo to the right:
Engagement weekend - Lunch in Florence 25 May 2014 (x)
He took her to Florence to ask the question. Very romantic.<3


...As to how Hannah deals with all the female attention being showered on him, Eddie explained, “She’s pretty amazing about it, actually. She loves her work. When she can take a holiday, she comes with me. Artistically, she’s very interested, too.”
He continued: “The great thing about acting is, you have very intense periods. But after this film, I was quite broken. I haven’t worked since so I took a long time to get back to my own body weight, my own self. It’s lovely to get her counsel; she’s incredibly grounding.”
...“I’m very lucky that a lot of my fans are incredibly generous people. Some of them sometimes will take photos with Hannah. I think she feels that they’re very generous to her. In any relationship, we’re constantly reassuring each other. But she’s very supportive in that sense.”
FULL ARTICLE HERE
The first half of the story is about portraying Hawking in the film. I will quote from this part in my next 'The Theory of Everything' related post.

I’m colorblind. My fiancée said, ‘What are you wearing?’ I said, ‘I know it’s green.’
She said, ‘That’s not green. It’s f – king green.’ - source: sirredmayne
('The Theory of Everything premiere at TIFF, 7 Sept. 2014)
Links (my posts):
Nice and generous - Eddie with fans - photos
Carol concert - Redmayniacs in Eton on 11th December 2013
My post about the proposal weekend
Eddie Redmayne got engaged to Hannah Bagshawe