Eddie Redmayne attended the 99  Homes Party hosted by GREY GOOSE Vodka at the America at The Trump Tower on Monday to support  his BFF Andrew Garfield.. Michael Shannon, Laura Dern, Andrew Garfield & Eddie Redmayne at the Premiere After-Party
for ‘99 Homes’ during the TIFF on Sep 8, 2014 (x) The previous night Andrew supported Eddie at the premiere of 'The Theory of Everything. 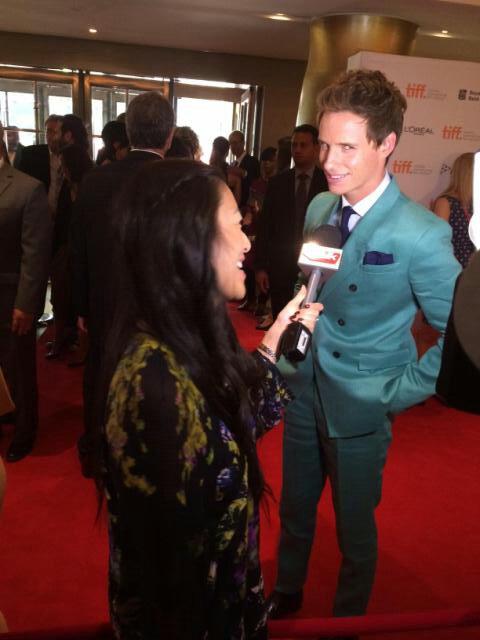 From Lainey Gossip posts:
@LaineyGossip:
Andrew Garfield just snuck past The Theory Of Everything carpet w/a look of such pride 4his friend Eddie Redmayne. 1of my top moments so far

Cute moment at the ToE premiere (x):
...Andrew and Eddie made eye contact and Andrew was lifting his chin, bobbing it slightly, kind of joke-smirking like "I see you, I see you", but also with an expression of such pride, such happiness for his friend. It was adorable and so sweet, and it became so obvious to me how close they are, how supportive they must be of each other.

Photo to the left: Lainey interviews Eddie (x)
Thanks Lainey!

Video: Eddie Redmayne And Andrew Garfield Hold Hands At 2014 Toronto International Film Festival
andrewgarfielddaily via (x) thanks to andrewgarfieldfans
There are a few more pics in my post about the ToE premiere

Lainey Gossip: Eddie supports Andrew right back
I interviewed Eddie Redmayne and Felicity Jones yesterday at the junket for The Theory Of Everything. As already mentioned, the film is SOOOOOOO good. And their performances are …well…everything. The key here is that the story is told from her perspective. So it’s not really a biopic but a film about partnership. But did you know that Stephen Hawking is a player? And I’m not talking about before his illness. Here’s a dude who can’t move and he communicates through a computer…and he’s a PLAYER.
This is what Eddie and I talked about. How Stephen Hawking schooled him about, not physics, but girls. And then Felicity told me that Hawking flirted with her the first time she met him. He straight up asked for her a kiss. And he was smooth about it too. Which is why one of Eddie’s inspirations for getting into the part was a photo of James Dean pinned up in his trailer. Stephen Hawking and James Dean in the same sentence. How’s that for a mind f-ck?
Anyway, both Eddie and Felicity are now part of the award season conversation. Michael Keaton’s momentum didn’t surge as much as people thought it would after Venice but the buzz around Eddie’s performance has been really loud coming out of Toronto. Felicity could also easily contend in the Supporting Actress category. They deserve it. Together, they’re a force in this film. And this film is a force too. There’s no reason why it shouldn’t be included in the list of Best Pictures.

So Eddie spent the day promoting his own film and then in the evening he went out to support his friend Andrew Garfield in 99 Homes. Andrew, after all, was there for him the night before. Click here for a refresher. I saw them together at the Grey Goose after-party at America at the top of the Trump. They seemed relaxed by the back bar, weren’t inclined to lock themselves in a corner or hang out on a couch with a rope around them. I had to ease behind them because they were blocking the cheese table. I never understand how these people can ignore the free food at these parties.

Back to Andrew and Eddie -- easy conversations with people who approached. Seemed happy just to hang out with each other. And then Robert Pattinson arrived in a baseball cap and immediately made his way over. A hug for Andrew, more smiles, more laughing, catching up. Eddie had told me earlier in the day that there was a whole crew of them, including Felicity, that all kinda trained together in London and that they’ve known each other for years. So it was like a reunion.... 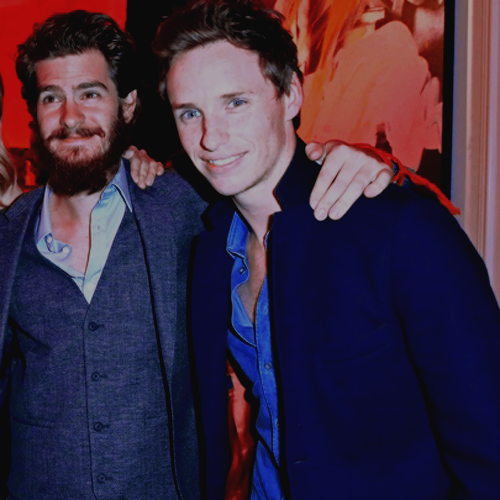 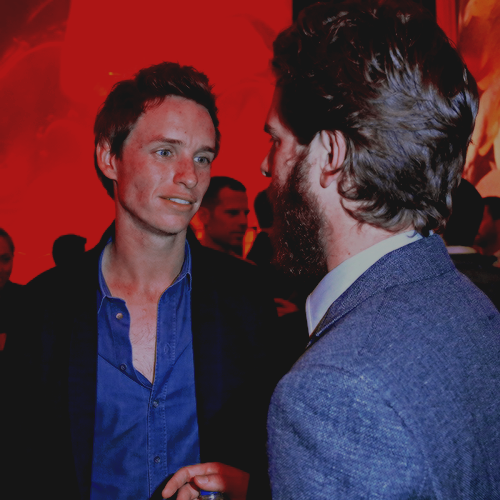 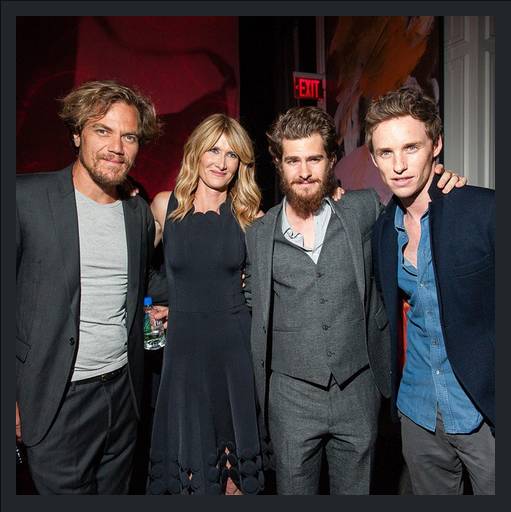