Working Title promo for The Danish Girl with Eddie Redmayne and Alicia Vikander. (via) haydenorpheumpicturepalace (x): A very special celebration is coming up…
TDG promo on tumblr News about The Danish Girl from BespokeRedmayne
The Hollywood Film Awards has announced three recipients from The Danish Girl, but what does it mean? Tom Hooper will receive the director’s honor; Alicia Vikander, a “breakout” acting award (which Eddie Redmayne won last year), and Alexandre Desplat will be honored for his music. The ceremony set for Nov. 1 in Beverly Hills, with Robert DeNiro already announced as the main honoree......(x) (x)
Also, with Eddie Redmayne (Fantastic Beasts) and Alicia Vikander (Bourne) both working, Hooper appears to be picking up some promotional work – which is perfectly plausible as an Oscar-winning director. Thursday night, he’ll be presenting The Danish Girl as the opener of the small but prestigious Mill Valley Film Festival near San Francisco. Eddie Redmayne did the honors last year for The Theory of Everything. (x) (x)
Pushing lead performances for supporting consideration ...
...Vikander is ideally primed, then, for one of those unofficial body-of-work nominations the Academy sometimes gives to over-achieving actors, pinned on her vivacious, affecting turn as Wegener — which, as “The Danish Girl” made the fall festival rounds, arguably garnered more awards heat than Eddie Redmayne’s much-anticipated work as Elbe.
I wrote as much in a report from Venice titled “Alicia Vikander may be the real winner from ‘The Danish Girl,'” noting
that her role is at least equal to Redmayne’s in size and emotional opportunity. In Toronto, others followed suit; Vulture’s Kyle Buchanan, while admiring Vikander’s work, even complained that the film was one of several notionally LGBT-themed fest titles that were “actually about” non-LGBT characters.
A stealth best actress candidate, then? Not so fast. Despite the leading buzz surrounding her performance, Focus confirmed recently that they’ll be campaigning Vikander for best supporting actress instead. From a strategic point of view, their reasoning is pretty transparent. The festival circuit has already turned up a surfeit of formidable best actress players. The supporting field, by comparison, has a little more breathing room, with no prohibitive frontrunners yet appointed even by the least patient pundits.
Vikander wouldn’t just have an easier time landing a nomination in this more fluid field — on the strength of her own career momentum, the presumed prestige of her vehicle and a beefier role than most of her competitors, she could well win. For Focus, meanwhile, playing down the status of her role could have the advantage of refocusing attention on Redmayne — who may have received perfectly respectful notices for his studious transformational turn, but didn’t leave Venice and Toronto with quite the heat they were probably hoping for. As with Mara, there’s no downside from
the campaigners’ perspective, save the indignity of passing off a strong lead performance as something less integral
to the film than it really is. And an Oscar usually soothes that bruise.... The music used as background in The Danish Girl trailer is available to purchase (for 99 cents U.S.)
on iTunes. It will have to do until the soundtrack by Alexandre Desplat comes along. (via)

Oscar Predictions from the-oscar-expert.tumblr.com
The Danish Girl related articles on tumblr
Other tumblr posts about The Danish Girl

Eddie Redmayne in The Times LUXX Menswear Magazine - cover and interview
Eddie Redmayne: My dad’s a snappy dresser. He’s a bit of a role model
‘I have two passions when I’m not working — one is painting, the other is playing the piano. Both of which I’m not great at,” says Eddie Redmayne. In fact, if he is to be believed, there are a number of things he is not very good at. Another
is tennis. And another was modelling, at which he was “catastrophically awful” while he was studying History of Art at Cambridge...(full article for The Times subscribers only) 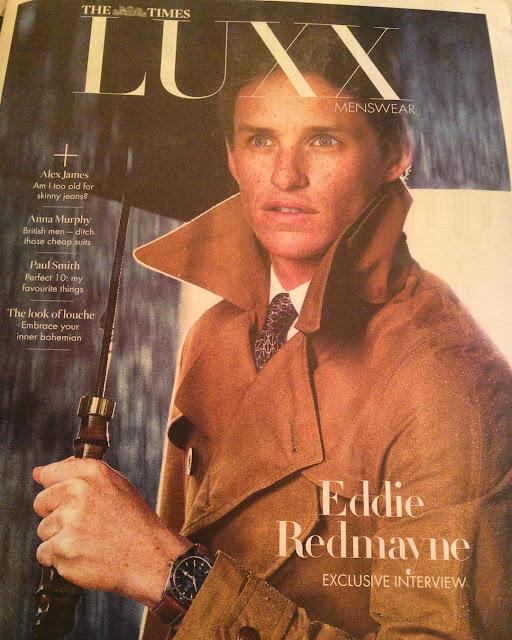 'I get stopped occasionally, but I still go on the tube:' Eddie Redmayne says life hasn't changed since his Oscar win
...In the interview with The Times, Eddie also explained why he doesn't have a stylist like most of his Hollywood peers. The talented star says his friendships with designers like Sarah Burton at Alexander McQueen and Mehmet
at Hardy Amies have helped him to develop his look.
He said: 'They take you into their world and educate you. And I love that. That's why I don't have a stylist.'
Touching on his early modelling career, Eddie described the experience as 'categorically awful'.
He said: 'I think the only job I got was knitwear - on those patterns for people who do knitting.'
It was only after graduating from Cambridge, after earning a 2.1 class degree in History of Art, and embarking on his acting career, that saw his modelling flourish.
He was spotted by Burberry's creative director Christoper Bailey who decided to cast him in ad campaigns.
Eddie explained: 'He [Christopher] came to see a lot of the plays I was doing, and he does this extraordinary thing of supporting young actors, models, musicians when they are trying to find their feet.'
Now Eddie is more in demand than ever and last month he visited Toronto to promote his latest film The Danish Girl
at the film festival...Read more