Recently I made a post about Eddie's film and play mothers. I decided to do one about his fathers too.
"...you must believe that one actor is the parent of the other actor, and if you don’t, if you just think it’s make believe,
that it’s Julianne Moore and Eddie Redmayne, it falls apart. But people believe it." (Tom Kalin) This is true not just for Savage Grace and his film mother, but for his other projects and fathers as well.
The list of the actors, who played Eddie Redmayne's father: 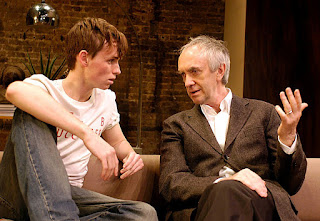 The Goat or who is Sylvia (Almeida Theatre 2004) -
Martin -  Jonathan Pryce
In 2004, in a performance which won him the Evening Standard Award for Outstanding Newcomer and the Critics' Circle prize, he had to fall into a needy kiss with Jonathan Pryce who portrayed the bestiality-convert father in Edward Albee's The Goat. ( x ) 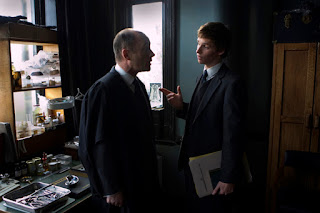 Like Minds (2006) -
Headmaster - Patrick Malahide
Alex Forbes, a young murderer cracking under the weight of a severely dysfunctional friendship with his second victim and his own father's mistreatment in the psychological thriller. ( x )
Patrick Malahide was Eddie's co-star in Tom Hooper's Elizabeth I. too. He played Sir Francis Walsingham. 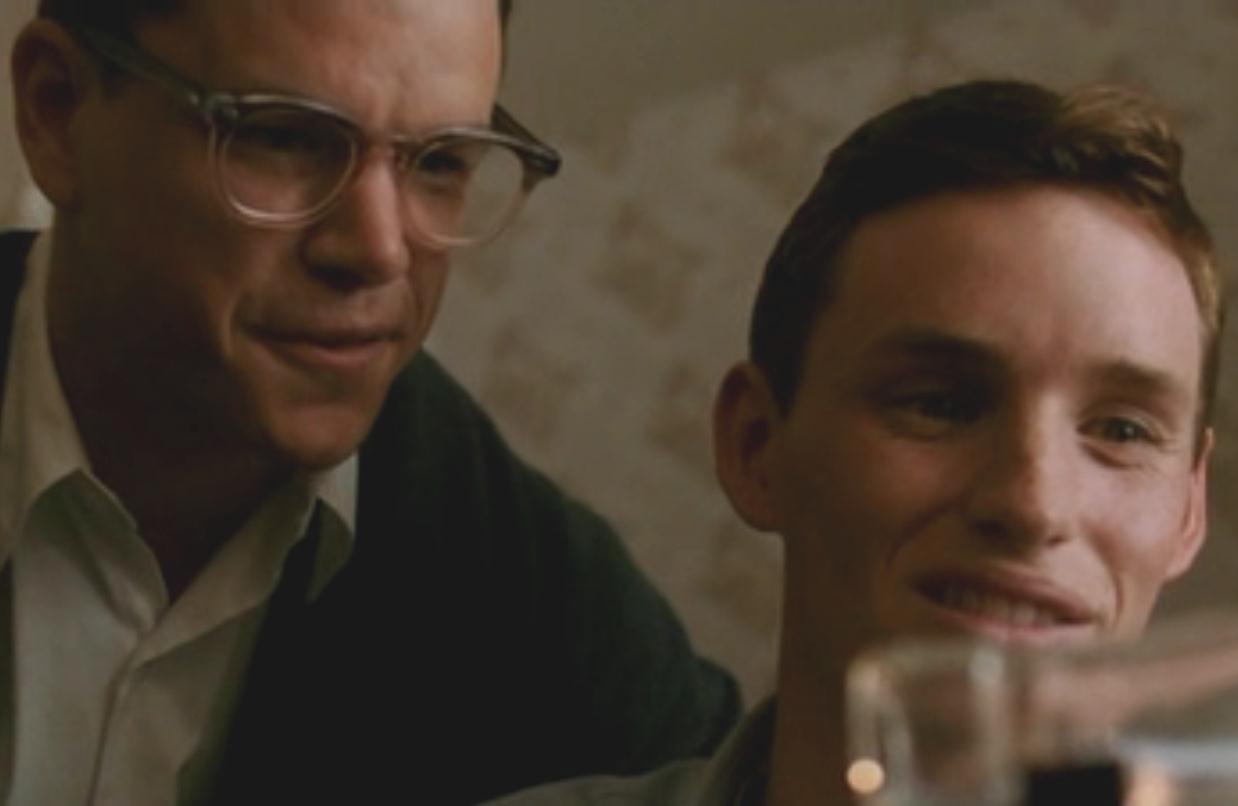 The Good Shepherd (2006) -
Edward Wilson - Matt Damon
Eddie Redmayne plays Edward Wilson Jr., a CIA suit's son reeling from his father's emotional removal. ( x )
Edward Wilson believed in America, and he would sacrifice everything he loved to protect it. The true story of the birth of the CIA through the eyes of a man who never existed.( x ) 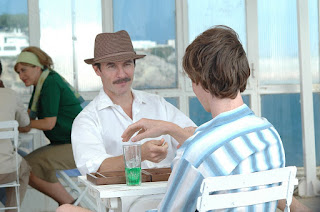 Savage Grace (2007) - Brooks Baekeland - Stephen Dillane
‘In Savage Grace I’m the gay son. My father runs off with my girlfriend and divorces my mother, and she screws me to straighten me out’ ( x )

"Stephen is incredibly cerebral and has a meticulous way of rehearsing. Julianne is a shooter from the hip – she doesn't like to go straight into scene. And as the kid, I was sitting there thinking, 'Oh my God these are two hugely different ways of working'. But that was wonderful for capturing the character of a boy who is pulled in two directions..." ( x ) 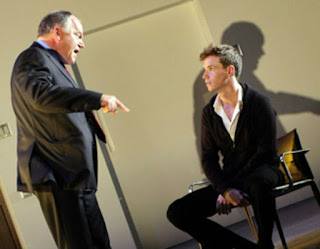 Now or Later (2008) -
John - Matthew Marsh
"My character is called John Jr," he says. "He is the son of the Democratic nominee for the election in 2008, and his dad is about to be elected president. And it's election night, and my character has gone and done something which is perceived by most people as being incredibly foolish." John Jr has gone to a party dressed as the prophet Muhammad, photos of which have surfaced on the internet. "And," says Redmayne gravely, "it's about to turn pretty hardcore and basically have massive international ramifications.
( x ) (x) 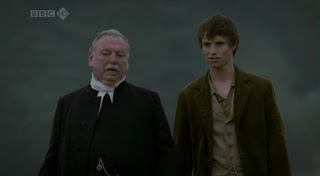 Tess of the D'Urbervilles (2008) -
Mr. Clare - Kenneth Cranham
"The character of Angel is liberal, a little bit out there for his time. He works at the Talbothay's dairy farm, to get some practical experience of agriculture as he hopes to buy a farm one day, rather than follow in his father's footsteps as a clergyman." 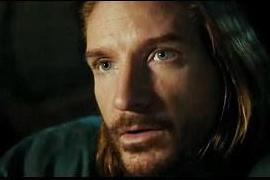 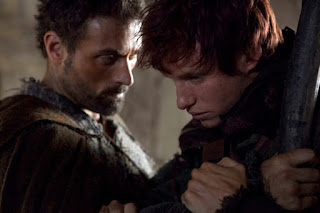 My Week with Marilyn (2011) - Sir Kenneth Clark - Pip Torrens
"Alan Clark, the politician was Colin’s brother, and their father was a man named Kenneth Clark, one of the great art historians, an incredibly eccentric chap. They were new money, but they lived in this amazing castle in Kent called Saltford Castle, they were very bohemian and because of that artistic background the family hung out a lot with Margot Fontaine and Laurence Olivier and Vivien Leigh." ( x )

Bonus (Rothko isn't Ken's real father): Red (2009-2010) - in Red, excellently directed by Michael Grandage at the Donmar, he plays Ken, a fictional composite of all the assistants ever used by the intense, dogmatic Mark Rothko - Alfred Molina. It's again a play about a father-and-son relationship in which the younger generation begins to make its superseding force felt. ( x ) 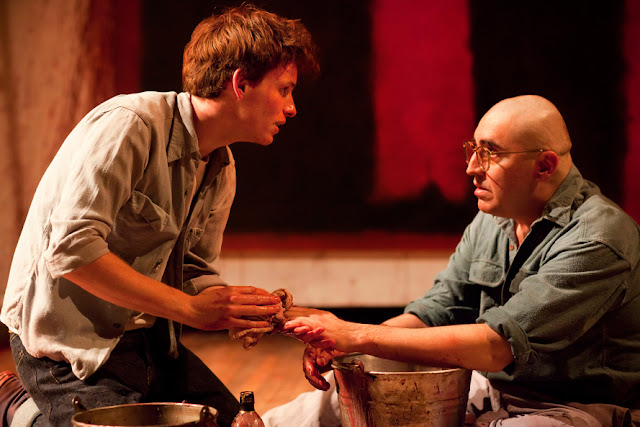 Update: The Theory of Everything (2014) - Frank Hawking - Simon McBurney
Frank Hawking, was a physician and research biologist who specialized in tropical diseases. - read more 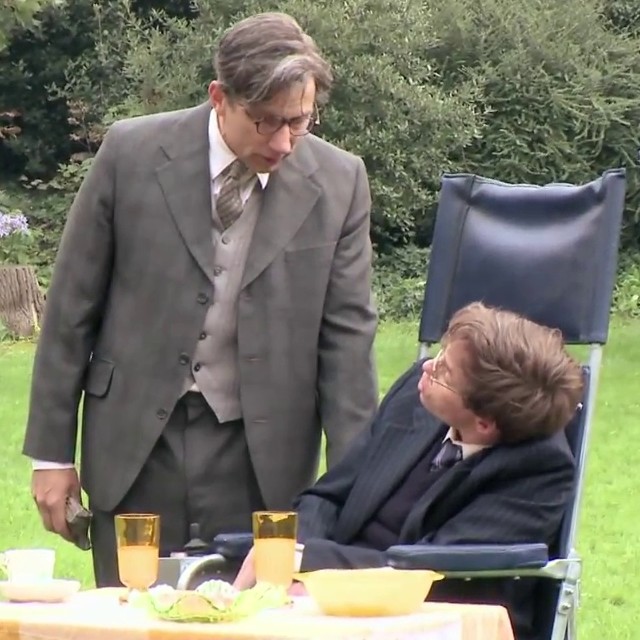 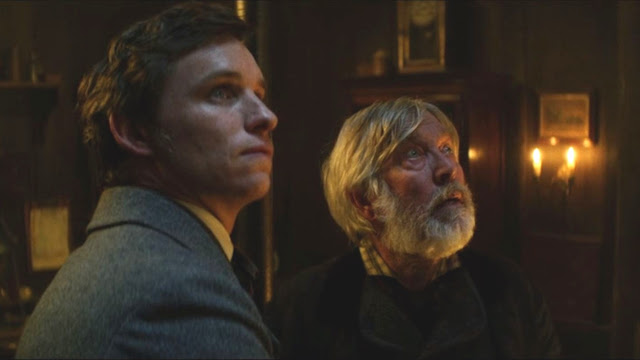 my screenshot from the movie