Eddie Redmayne's crossdressing began in Eton. One of his drama teachers Hailz-Emily Osborne remembers
being entranced by a 13-year-old Eddie when he first took to the stage.
“He had been given a non-speaking role as Queen Charlotte in an excerpt of The Madness of King George. All Eddie had to do was stand and look terribly concerned while the elder boy hammed it up and went mad, but I was just riveted by him. He came across as so professional, even at that young age,” she recalls of her star pupil. (x)
Later when he was 15 he played Adela Quested in a stage version of A Passage to India.
His first professional stage performance was Viola in Shakespeare's Twelfth Night in 2002.
Now  this seems to be continuing on the big screen in the biopic of the Danish painter Einar Wegener alias Lili Elbe.
I can't imagine anyone who would be better for this role than Eddie. 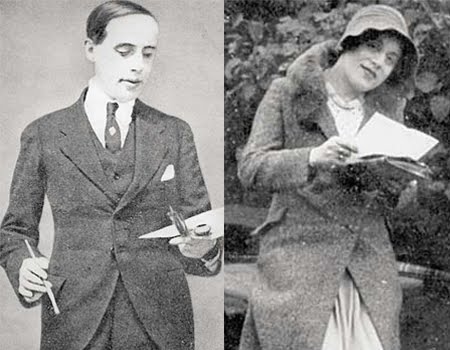 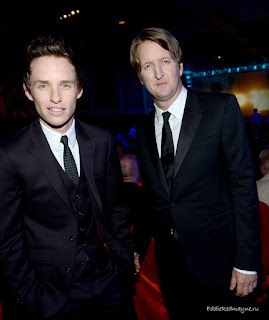 The news was first reported by Deadline.com: ‘Les Mis’ Duo Tom Hooper And Eddie Redmayne Re-Team On ‘The Danish Girl’
After teaming with Working Title partners Tim Bevan and Eric Fellner on Les Miserables, director Tom Hooperand actor Eddie Redmayne are reuniting with them on The Danish Girl, a film inspired by the novel written by David Ebershoff. The film is a love story about Danish painters Einar Wegener and his wife Gerda. In 1930, Wegener was one of the first men ever to undergo operations to become a woman.
Hooper, who won the Best Picture Oscar for The King’s Speech, hasn’t declared a follow to Les Miserables. He’s attached to direct this, and Redmayne will play the artist in what will be a most challenging role. Lucinda Coxon adapted the screenplay. Gail Mutrux developed the film and will produce through her Pretty Pictures banner alongside Anne Harrison and Linda Reisman. Working Title’s Fellner and Bevan will produce with Hooper. Hooper’s repped by ICM Partners and Independent Talent Group in the UK, and Redmayne is repped by CAA and manager Gene Parseghian.

The Hollywood Reporter: Eddie Redmayne, Tom Hooper Reteaming for 'Danish Girl'
...The drama is based on the 2001 novel by David Ebershoff, which itself is based on the life of Danish painter Einar Wegener, who became the first man to undergo a sex-change operation. The novel focused on a love story between Wegener (who later changed his name to Lili Elbe) and his wife, Gerda Gottlieb, also a painter... 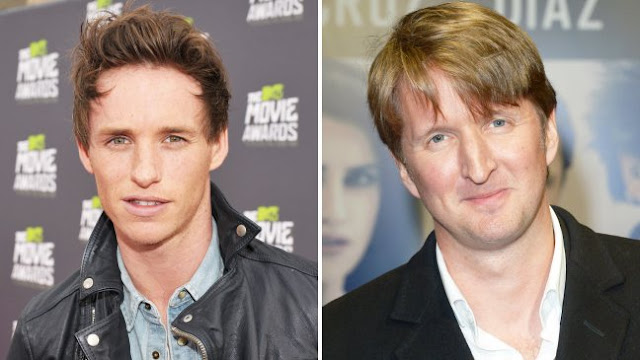 "The Danish Girl is an extraordinary love story and a story about finding your true self," Hooper tells THR. "I first read Lucinda's script when I was making The King's Speech and I was so moved by this true story. I have wanted to make the film ever since."
The project has been the target of several attempts at adaptation, and has seen Nicole Kidman, Charlize Theron, Gwyneth Paltrow and Rachel Weisz circled at various times for the two parts.
Lasse Hallstrom, Tomas Alfredson, Neil LaBute and Anand Tucker are directors previously associated with the project.
Working Title was behind Hooper's acclaimed big-screen take on Miserables, which grossed $441 million worldwide.

...As THR reports, Hooper and Redmayne will reunite for The Danish Girl, which sees Redmayne playing Wegener in what promises to be a transformative and challenging role. Hooper, who won an Oscar for his direction of The King’s Speech, hasn’t announced his follow-up film to Les Miserables just yet, but he’s now attached to this adaptation....
Here’s a synopsis from Ebershoff’s 2001 novel, The Danish Girl (via Amazon):
A stunning first novel that probes the mysteries of sex, gender, and love with insight and subtlety Inspired by the true story of Danish painter Einar Wegener and his California-born wife, this tender portrait of a marriage asks: What do you do when someone you love wants to change? It starts with a question, a simple favor asked of a husband by his wife on an afternoon chilled by the Baltic wind while both are painting in their studio. Her portrait model has canceled, and would he mind slipping into a pair of women’s shoes and stockings for a few moments so she can finish the painting on time. “Of course,” he answers. “Anything at all.” With that, one of the most passionate and unusual love stories of the twentieth century begins.

Movieweb: Director Tom Hooper Reunites with Eddie Redmayne for 'The Danish Girl'
The drama is based on a love story between two Danish painters, one being the first man to ever undergo a sex change operation. 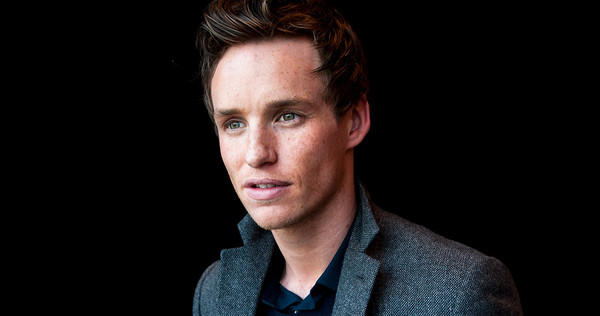 Indiewire: Redmayne Latest Attached To Long Developing 'The Danish Girl'
"The Danish Girl" is a movie that has simply refuses to get made, even with some of the biggest names around attached at various points. So, let's break it down, shall we? Way back in 2009, Tomas Alfredson ("Let The Right One In") was going to make the picture his English-language directorial debut with Nicole Kidman and Charlize Theron in the lead roles. But Theron exited the project and was replaced with Gwyneth Paltrow. Then Alfredson left to direct "Tinker, Tailor, Soldier, Spy" instead. Later, Lasse Hallström took over the directing reins only for Paltrow to bail on the movie. Then Rachel Weisz joined, and then left, and sometime in the last couple years, Kidman and Hallström also moved on. But now, the guys from "Les Miserables" are going to try and make it happen. 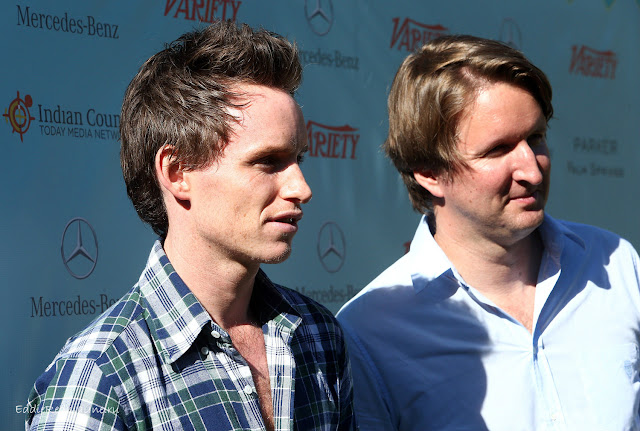 Dark Horizons: Hooper, Redmayne Re-Team For "Danish Girl"
...The story follows Greta Wegener, a portrait painter in 1920s Copenhagen who asked her husband Einar (Redmayne) to stand in for an absent female model. Slipping on a dress, stockings and woman’s shoes began a metamorphosis into Lili. When the photos became wildly popular, Greta encouraged her husband to do more.
The harmless game evolved into something deeper - the landmark 1931 first sex-change operation that shocked the world and threatened their marriage. Greta finally let go when she realized the man she married no longer exists...

Firstshowing.net: Tom Hooper & Eddie Redmayne Set to Reunite for 'The Danish Girl'
...It definitely sounds like a role that could earn Redmayne an Oscar nomination if the project stays on track, so we'll keep our ears to the ground for more updates.

The author David Ebershoff tweeted about the news (x): ..Einar and Gerda would be happy about this. 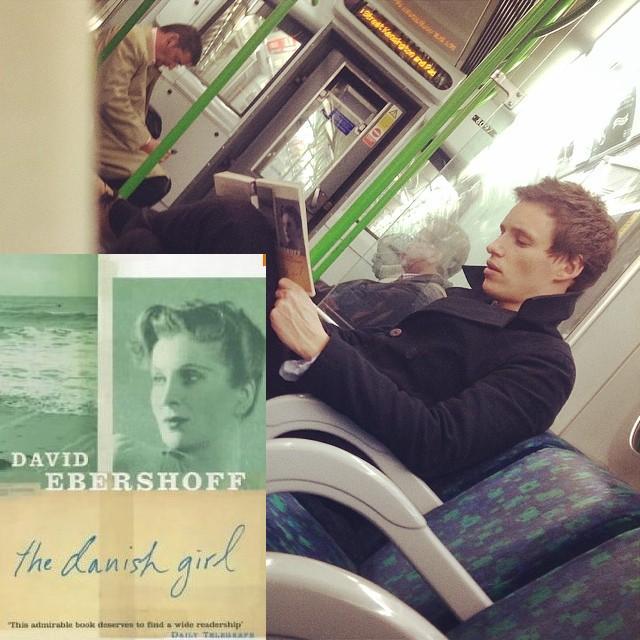 Excerpt from the book on David Ebershoff's site

Video: Gerda Wegener (about her paintings)

Update: I know from the comment now, that this was the book he read on the tube. I searced the cover on Amazon, here it is to the right with the tube photo (x) I posted already in my 18th March post.