Little unknown fact for you all I once did a film with Eddie Redmayne, I was an extra ha! :)
— Louis Tomlinson (@Louis_Tomlinson) March 25, 2013

This movie was Like Minds. - My post about the movie (update)
Louis Tomlinson appeared for a short time in the film. He was one of the school students who were waiting for a hearing of the detective after Susan's body was found near the school.

Eddie was asked about this at the Teenage Cancer Trust afterparty
at the Groucho Club in 10 April 2013.
He didn't realise Louis was even in the 2006 film with him.
He said: "I know One Direction but I don’t know the individual members. I had no idea he was in a film with me when he was a child, I feel really old now!

“I’m pretty sure all the fans will probably watch it and be annoyed that I’m taking up all the screen time.

“I’ve never met One Direction but it’s good to know I have this unbreakable bond with one of them now."

The reporter asked if he would ever duet with One Direction.Laughing at that suggestion, he told: "An Eddie Redmayne and One Direction duet? What singing A Heart Full Of Love [a Les Mis ballad]? I don’t think anyone wants me to ruin what they’ve got going for them. I think I’d definitely cramp their style, I’m not quite teenage girl boy band pin-up material!"

Source: EXCLUSIVE! Les Mis hottie Eddie Redmayne on being in a movie with One Direction's Louis Tomlinson 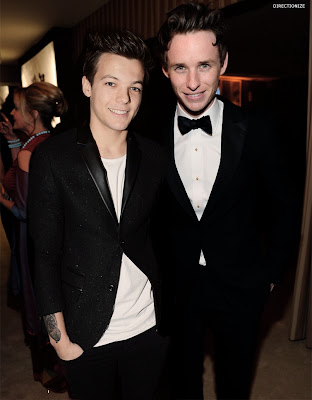 Eddie Redmayne quote
"I have this horrific thing where I'm really bad with names and faces. I have anappalling memory. Someone will come up to me in the street and go, 'Eddie!',and I'll try and give myself time by going into overdrive, 'Hey, hi! Nice to see you!' and start a whole conversation because I can't distinguish between who I know and who I don't."