Back to the Potterverse - Hungarian VOX Magazine November 2016

The films of the month in the magazine were Fantastic Beasts and Where to Find Tem and Doctor Strange.
The issue featured an article about the movie and the 5 part franchise. My scans and summary. 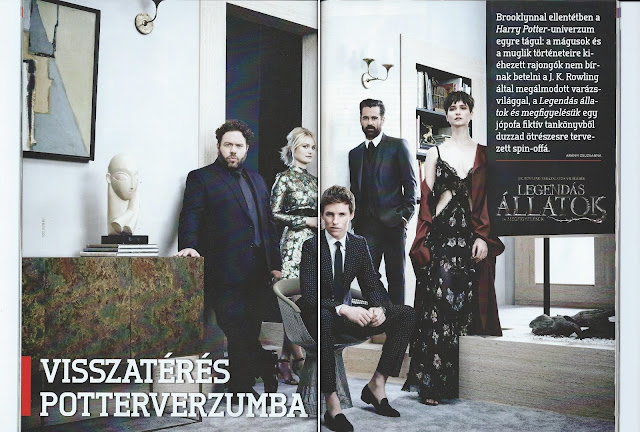 The article by  Zsuzsanna Arányi isn't contain new informations for those who read the previously published articles, interviews. First the author writes about the success of the Potterverse and the birth of the movie and the franchise. The textbook, that J.K. Rowling wrote in 2001 to support the Comic Relief charity only the inspiration of the big new story that doesn't fit into one movie. The next part of the article describes the location and basic plot and introduces the main characters without spoiling the movie. The last part is about the director and Eddie Redmayne, who according to David Heyman producer was their first choice for the role from the beginning. Eddie talks about the pressure of meeting the expectations of the huge Harry Potter fanbase and the comforting effect of the new story
and the strong supporting characters. There's no book, the fans can compare the film with, and the focus is on the foursome, not only on Newt Scamander. In addition there's a little story about the choosing of the wands.
(wand designer Molly Sole about the wands in FB - video: Eddie about choosing his own wand)