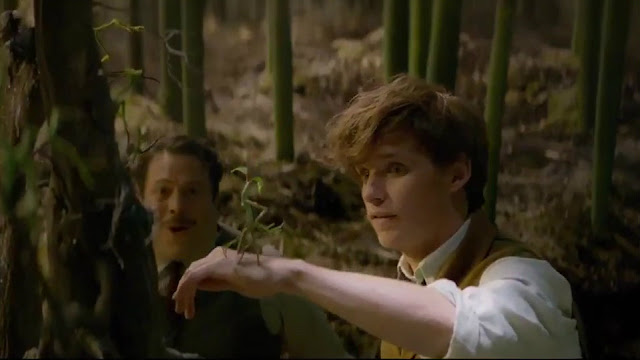 Sienna Miller has revealed the sweet gift Eddie Redmayne gave to her four-year-old daughter
Marlowe – her very own character in Fantastic Beasts and where to Find Them!

my gifs from the
VIDEO 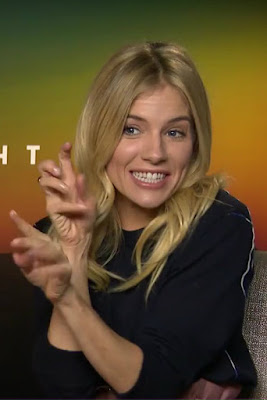 "I would just love to do something that my daughter could kind of
enjoy...Anything with a wand I'd be happy in. Maybe I try get into
a Harry Potter type thing...
- They're making five... Fantastic Beasts...
- I know, and her godfather is the star, so hopefully...
There's a stick insect in Fantastic Beasts, that Eddie Redmayne
named of my daughter called Marlowe...
He one moment could name the stick insects, there are a few of
them ...and he named them after his godchildren,
who all have interesting Potteresque names

Excerpt from the Original Screenplay - CLIP

They enter a bamboo wood, ducking and diving through the trees.
NEWT calls out.

NEWT: Titus? Finn? Poppy, Marlow, Tom?
They emerge into a sunlit glade, NEWT producing PICKETT from his pocket
and holding him perched on hid hand.

NEWT (to JACOB): He had a cold. He needed some body warmth.
JACOB: Aww.
They move towards a small tree bathed in sunlight. At their approach, a clan
of Bowtruckles chatters and rushes out of the leaves.
Newt extends his arm towards the tree, trying to persuade PICKETT to rejoin
the others. The Bowtruckles clack noisily when they see PICKETT.

NEWT: Right, on you hop.
PICKETT steadfastly refuses to leave NEWT's arm.
NEWT (to JACOB): See, he has some attachment issues.

(to PICKETT) Now come on, PICKETT. PPICKETT.
No, they're not going to bully you...now, come on. Pickett!
PICKETT clings by his spindly hands to one of NEWT's fingers,
desperate not to return to the tree. NEWT finally resigns himself.

NEWT: All right. But that is exactly why they accuse me of favouritism.