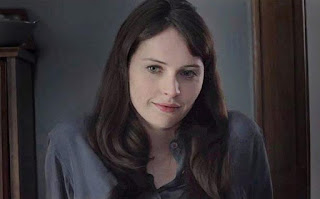 Felicity Jones in 'Breathe In': Wise beyond her years
-By Jeff Labrecque on Mar 25, 2014 (full article)
The "Theory of Everything" related part of the interview:

Post Spider-Man, what will we see you in next?
I just finished a film called Theory of Everything with Eddie Redmayne, which is coming out later this year.
That’s the Stephen Hawking movie, yes?
Yes. It was an absolute labor of love. And an incredible experience to meet Jane Hawking and Stephen Hawking.
Is the story told from her perspective or both of theirs?
It’s about both of them, yeah. They fell in love when Jane was 18 and Stephen was in his early 20s, and he was diagnosed with his illness within the early stages of their relationship. We play both of them from their teens, in Jane’s case, through to 45. So it’s all the different stages and emotional upheavals of that relationship for that period. It’s about how they coped with that and both their own ambitions.

They’re both extraordinary people and it’s a really phenomenal story. I read Jane’s book, which is very detailed about their relationship and then just spent a bit of time with her and got to know her and wanted to do her story justice. I had huge empathy for their situation. So it’s quite intimidating when you’re playing someone who’s alive, but I can’t imagine what it’s like for them. It must be very strange to have someone playing your life, but they were supportive of the film and very trusting of us.

The article was posted on 1 October 2013 by Grace Williams and Dan Richards. They interviewed The Location Manager Claudia about the film and were lucky enough to see some of the filming on Friday 27th September.
Here are some excerpts from their post - link to the full article 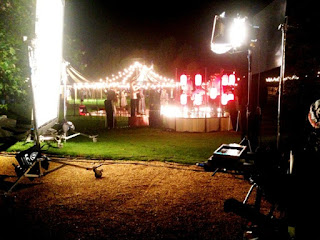 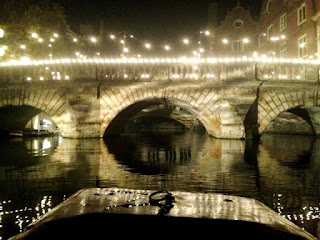 The scene they had been shooting outside The New Court as we arrived was in the section of the film which focuses on Hawking’s early life, studying at Cambridge University before he received his diagnosis. That night they were filming a May Ball set in 1963 where Hawking, played by Eddie Redmayne – also a Cambridge Graduate who received a 2:1 in History of Art from Trinity College in 2003, watches the May Ball fireworks with first wife played by the intelligent and stunning Felicity Jones .
The atmosphere of excitement of our Cambridge University May Balls was captured perfectly.... 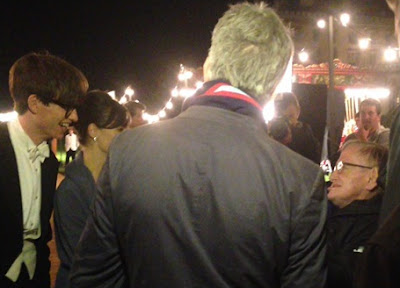 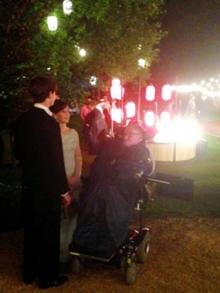 ...Despite being given just 2 years to live at the time of his diagnosis in 1963, a smiling Steven Hawking joined us on the set many years later, to watch the fireworks display and to share a brief but lovely conversation with Eddie Redmayne and Felicity Jones. They spoke only for a few minutes and Eddie said how they told him his hair should be messier – Hawking with a smile informed him ‘your hair is fine’. After a few photos, Steven Hawking was taken to his own tent and filming continued. 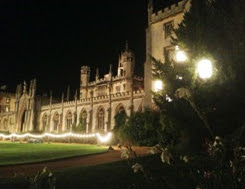 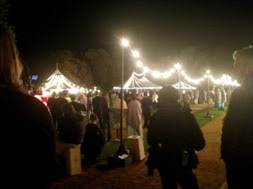 ...Amazingly, there were 3 takes of the fireworks display in total so we were treated to 3 identical fireworks displays designed by Titanium – The same company who did the London Olympics fireworks last summer. I hope the film captures how spectacular they were!
The May Ball scene was the last of the outside shoots and they would be filming in a lecture theatre the following day and then in studios for the remaining 5 weeks of this 9 week shoot. She explained how this week they had been filming around the city; making the most of Cambridge before completing the remaining scenes in studio...
...Tucked away here by the banks of the river, we could watch Eddie Redmayne and Felicity Jones rehearsing via the playback monitors. Eddie’s depiction of the young Hawking was flawlessly well observed and I am very excited to watch his interpretation and the scene (photographed) when the film is released!...
...It was a fantastic evening spent on a calm, well organised and focused film set with the ever romantic New Court Building as a spectacular back drop. Directed by award-winning documentary maker James Marsh and produced by the same company that bought us film sensations such as ‘Les Miserables’, ‘Anna Karenina’, ‘Tinker Tailor Soldier Spy’ and ‘Atonement’, I’m sure it won’t disappoint...

Thanks to the authors Grace and Dan to share this with us - again: link to the full article

Another post on Livett’s Launches site about the filming:
FILMING FOR UPCOMING MOVIE ABOUT STEPHEN HAWKINGS 07 Nov 2013
The film features Stephen as a young man in his university days, during which he was a coxswain for the university’s boat club. Producers were in need of a filming location and camera boats for a sequence using two row boats.
Livett’s Launches suggested and arranged a filming location and provided the necessary camera boat. Captain Dave Arnold served as Skipper and Marine Coordinator for the job. He made sure that the early morning filming went smoothly, the camera crane and equipment placement on board our camera boat, Eco-Cat, and that the safety boat was on hand. 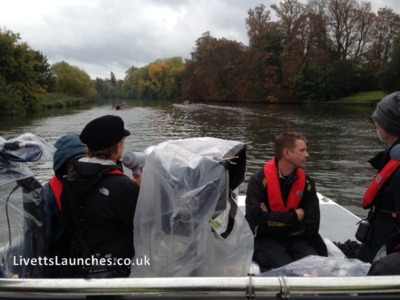 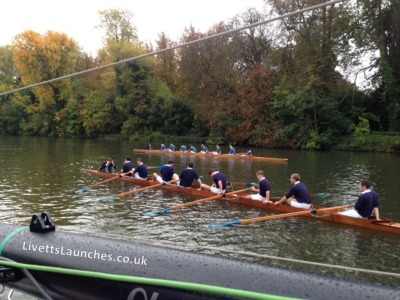 On the right: Eddie sits in the stern (it's a pity the picture is so small)

The Independent article with video (9 Sept 2013):
Stephen Hawking on life, the universe and marriage


Breathe In: Felicity Jones Describes the Film’s ‘Thriller’ Origins
Felicity Jones explains what she thinks happened after the end of Like Crazy
CraveOnline article by FredTopel 26th March 2014 (full article)
...Then how was playing Jane Hawking in Theory of Everything?
Oh, that was an incredibly experience. I finished that. That was the last film I just worked on and it was a real labor of love. I have such huge respect for Stephen and Jane Hawking. It was a really intense but phenomenal experience.
For Eddie Redmayne to play a character who only communicates through a voice box, how did that change your relationship, rehearsals or performance?
That was such a big part of charting their relationship is as Stephen’s health fails, how their communication becomes much more through boxes and machines. It’s interesting how as a couple they become more distanced as the communication between them becomes more difficult. You’ve hit on a huge theme of the film.
So this is a long term story that’s from beginning to end and different phases of their lives?
Absolutely. Jane’s 18 and Stephen’s in his early 20s when they meet and Eddie and I play them throughout their 20s, 30s and into their 40s.
Have you ever played an age range like that before?
Not chronologically in the way that it worked out in Theory. I’ve jumped between two time phases in Invisible Woman. I was moving between my late 30s and my late teens, but this is the first time I’ve done it where you’re seeing literally the process of aging.
What did that give you to play with as an actor?
As an actor it’s a phenomenal experience because you have to show someone changing and evolving as you do as you age, not only physically but emotionally. It was just an amazing thing to get my teeth into....
Posted by Jutka at 8:57 AM

Email ThisBlogThis!Share to TwitterShare to FacebookShare to Pinterest
Labels: article, Felicity Jones, Theory Of Everything