The most charming psychopath - Eddie Kreezer the bad guy in Hick

Quite brutal, isn't it? - Eddie Redmayne's acting is impressive. He played the bad guy convincingly.
Why Luli kept get into the car with him? - The most charming psychopath!

Hick: A Ground-Breaking Film About a Teen Girl as You've Never Seen Her - Huffingtonpost article 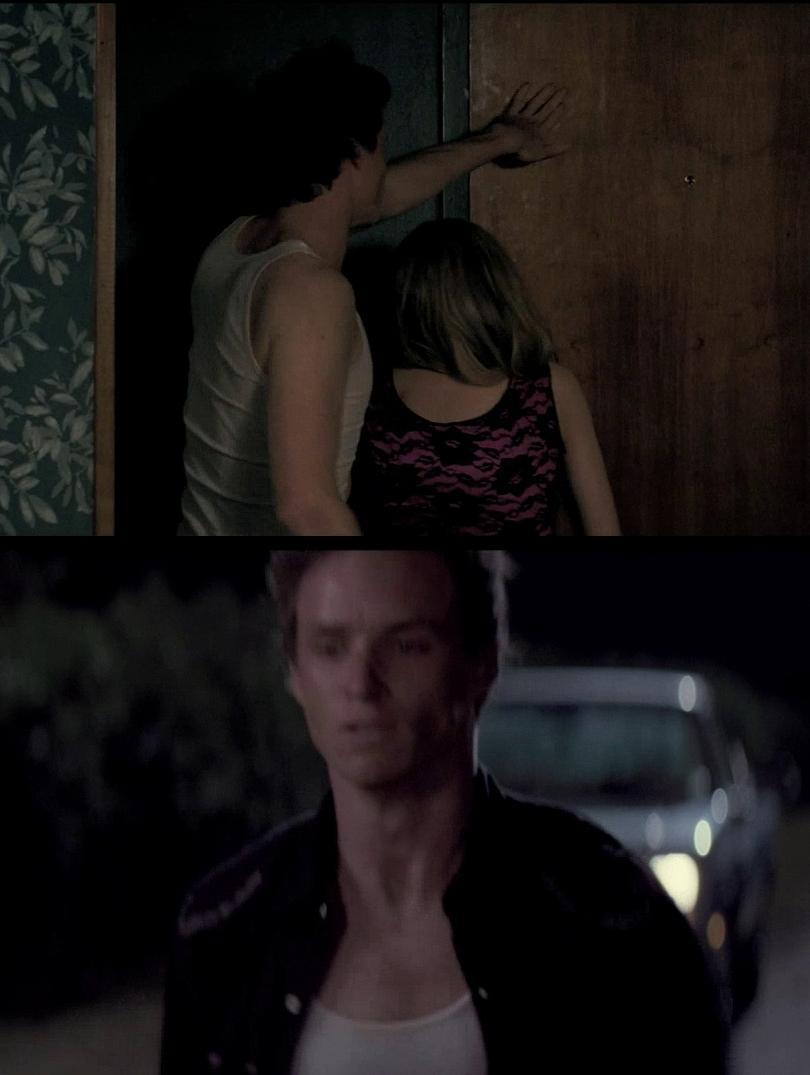 Andrea Portes: You know, before anyone was cast there was a common question: "Why does Luli keep getting in that truck with Eddie?" And my answer was, "Look, if you cast the right Eddie, you'll understand." And that's exactly what happens with Eddie Redmayne. You KNOW you shouldn't. You KNOW you're probably going to regret it... but you just can't help yourself. He's charming, and crazy, and vulnerable, and funny, and psychotic, and goofy. And, yes, ultimately, he's broken. But you still fall in love with him.

VS: I like to think of Eddie as being a Western Humbert Humbert, with gunslinger sex appeal rather than poetic charm, and I imagine it must have been one of the more difficult roles to cast. What brought you to Eddie Redmayne?
DM: I saw him in the play RED. Thought he was brilliant. Then when Hick came along and I cast Chloe, she and her brother Trevor brought him up, which was music to my ears. I knew I didn’t have to audition him—I met him over Skype and just asked “Do you want this?”

Exclusive interview with Derick Martini (full interview)
Q: How did you get the idea to cast Eddie in this part a British guy as a Texan cowboy?
A: My agent took me to see his performance in the play called «Red» on Broadway which he was wonderful in. So I remembered his performance in «Red» and when this movie came up, his name came up and I was immediately gravitating towards working with him. Because he did such a brilliant performance on stage I knew I will be able to get a great performance from him on film. I just really pushed for him, because that`s what I wanted. I didn`t do audition or anything, we just spoke over Skype because he was in London. He was excited about the part and he believed that he could do it and I believe that he could do it. So I just cast him.
...Eddie is a classically trained British actor. His mastery of his approach is remarkable. He gets the «fussiness» or «technicalities» of his performance out of the way first. Much like in theatre.

He will quickly decide on how he will be using «external props» like cigarettes or his hat. He gets that out of the way and then turns his focus to the raw, emotional part of delivering his part of a scene.
Q: Are the props in the script?
A: The props are in the script. But they can become an encumbrance to an actor if they are thinking about them while trying to do a scene therefore, Eddie very quickly decides how he will use such props and then forgets about them and focuses on the emotion. Eddie had a lot of great ideas, in general, regarding his character in Hick. Well beyond props. We were dealing with very intense, emotional material and his ideas were quite valuable. His instincts are amazing. Eddie is one of the most
generous, professional and talented actors I have ever directed.