My adventures at the Venice Film Festival

As you possibly noticed I didn't make posts for a few days. The explanation is simple. I was in Venice to meet my Italian Redmayniac friends, to see Eddie for the first time, and attend the World Premiere of 'The Danish Girl'.
The journey wasn't easy. I left home on Thursday afternoon at 3 PM. My first train was canceled due to the migrant problems and I had to search another way to get to Vienna in time to reach the night train to Venice, which arrived at the Santa Lucia Station on Friday morning at 8:24. Luckily I could sleep on the train. I met Cris and her husband on the Piazzale Roma. Daniela joined us when we took our accommodation and we went back to see the city and the locations of the Festival. 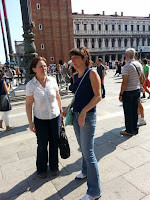 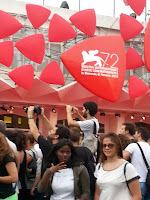 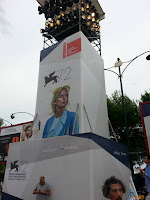 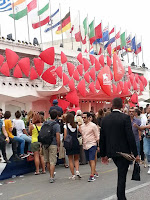 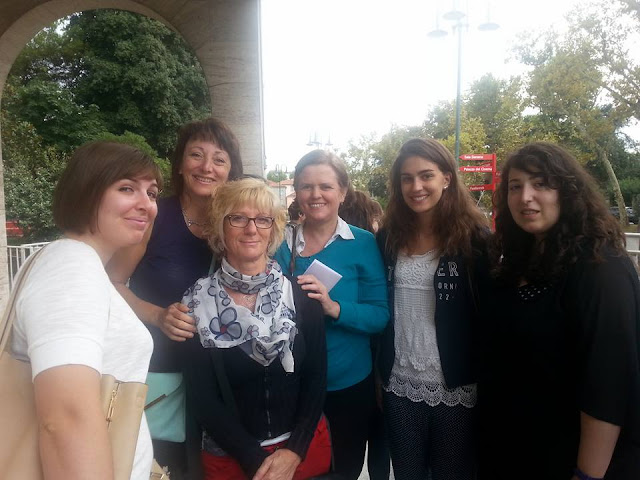 On Saturday morning we met the Venetian redmayniacs and we went together to the location of the press conference and photocall. Eddie was expected to 2 PM, but we were there much earlier because we had to be
in the right place to have a chance to meet him. Eddie knows Cris, he met her several times, this increased our
chances. When Eddie arrived to the conference, he was in a hurry and didn't notice us, so
we had to wait for our next chance. When he came back he was in a hurry too, but this time we were in a
better, more visible place and he noticed Cris. He stopped for us, took photos, and signed. I had the opportunity
to give him my short letter and he got a lucky owl from Daniela. Eddie was very nice and probably he knows
my blog, because when Cris drew his attention for me, he knew, that I'm from Hungary. Anyway, he looks
much better in person, than on the photos. 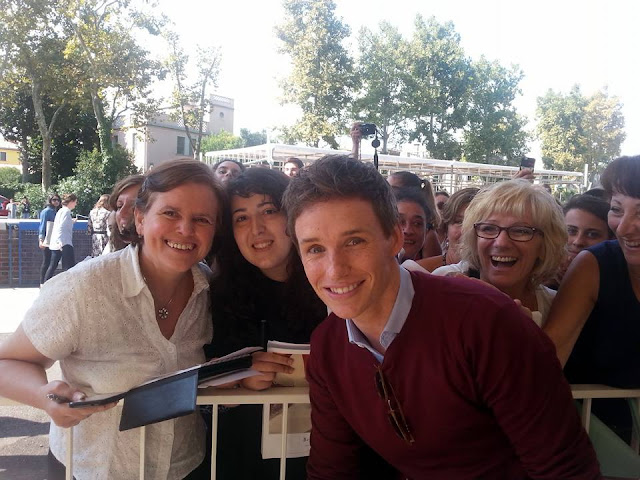 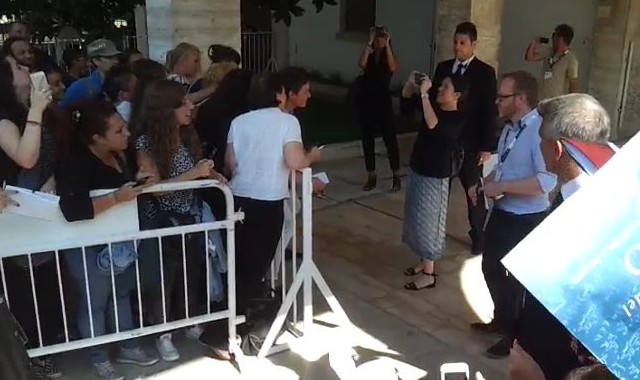 This picture above is from the report of Maria Cristina 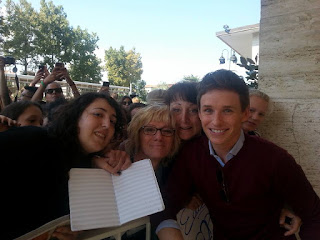 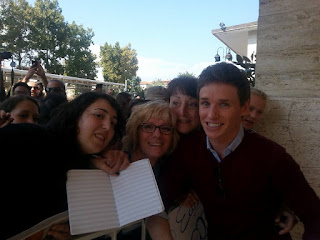 We met Eddie after the press conference and took photos with him. He was very lovely. Thanks to Cris,
who made this amazing experience possible for me. Videos about our meeting with Eddie below: 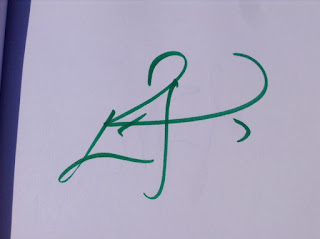 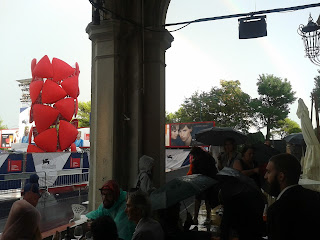 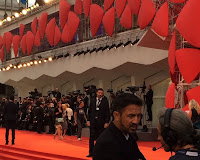 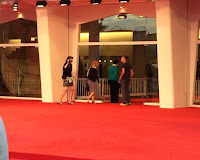 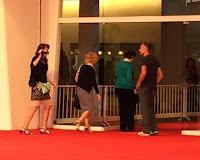 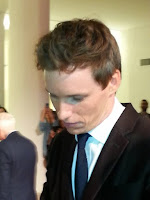 Next, we went to the premiere. We waited over the arcade of the building next to the Palazzo del Cinema because the rain began to fall. We had to change the shoes and
some clothes too. I didn't expect that we're going to walk the same red carpet as the
stars, but this is what happened. We went to the entrance hall and waited for their arrival there. We had the opportunity to take photos and videos too (you can see mine below).

The second part of Cris's report about the premiere here

photo to the left (x)

Cris and Claudio (her husband) sat on the left side, me and Daniela in the middle in the 18. row.
The seats of the stars were behind ours, there was only one row and a stair between us. I failed
to make a proper video about the introduction of the stars before the screening, because the
lightning was too bright and photographers stood in front of me. 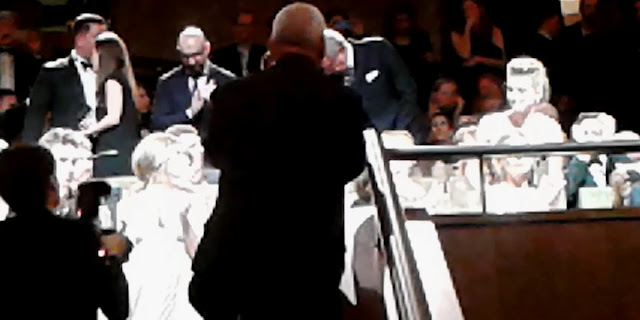 The film was beautiful and moving. Some parts were cheerful, some were sad, this was a masterfully
made, sensitive emotional roller-coaster with excellent acting. Eddie could convey Lili's thoughts and
feelings - described in the book on several pages - with a few graceful movement and expression.
I read the book and although there were differences, the adaptation very well mirrored its atmosphere.
Probably some people will criticize the movie, because in some places its story is different from what
happened in real life, but this is even more true in the case of the book. This is a love story, not
a documentary of Lili's life, the focus is on the emotions. David Sexton's (quite negative) review
mentioned the nudity in the film. I will not tell you about the details, only that the scenes are
subdued and don't cross the boundaries of good taste. 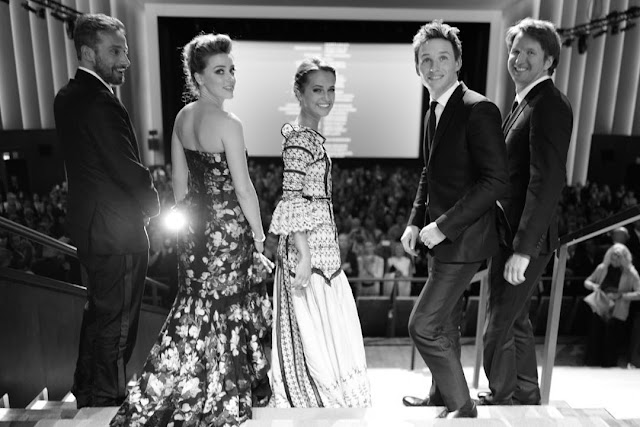 Matthias Schoenearts, Amber Heard, Alicia Vikander, Eddie Redmayne and Tom Hooper (x)
We were there behind the rail somewhere in the middle of the second row. 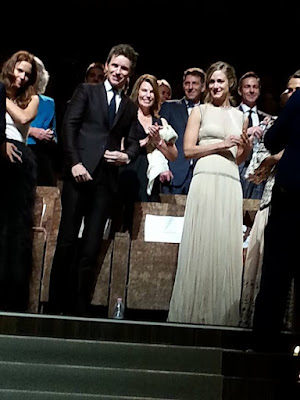 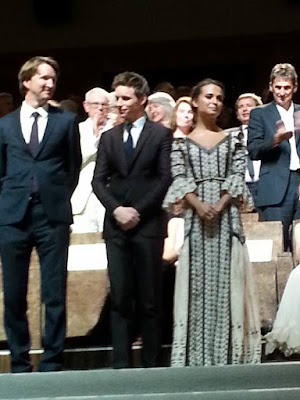 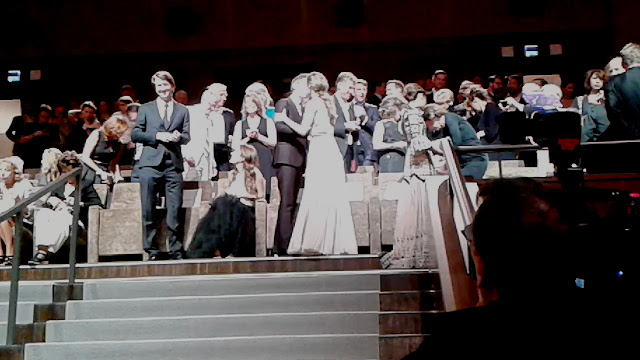 After the screening of the movie the crowd (inc. me) celebrated the stars with a long standing ovation.

I made this short video above in the end when I stopped clapping.

We spent Sunday in Venice and in the evening I boarded the bus headed home. The trip with bus is much shorter and cheaper than the train journey, but unfortunately, I cannot sleep while sitting, so I was very tired when I arrived home on Monday morning.
Tumblr posts