The Variety cover story on Eddie’s intense preparation for The Danish Girl, rich with new insights. (via)
"I can access [Lili’s] smile quite easily,” Redmayne says. “It’s my interpretation of her smile.” He recalls a conversation he had with a transgender woman as part of his research, where he asked her when she felt happiest. “It was after transitioning, and she was just walking through a park and sat on a bench — and saw the world go by and smiled to herself,” he says. “It was a moment of the world feeling right. The idea of that smile was something I tried to find." Variety praising Eddie Redmayne’s performance in The Danish Girl
Venice Film Review: ‘The Danish Girl’
Eddie Redmayne makes the ultimate transition, reteaming with 'Les Miserables' director Tom Hooper in this sensitive, high-profile portrait of transgender pioneer Lili Erbe...
... For an actor, there can be few more enticing — or challenging — roles than this, in which the nature of identity, performance and transformation are all wrapped up in the very fabric of the character itself, and Redmayne gives the greatest performance of his career so far, infinitely more intimate — and far less technical — than the already-stunning turn as Stephen Hawking that so recently won him the Oscar....

The Danish Girl is among the 13 “must-see” films chosen by Variety
as the Toronto International Film Festival launches. (via)
Just one year after debuting his Oscar-winning performance as Stephen Hawking in “The Theory of Everything” at Toronto, Eddie Redmayne returns with an equally powerful story directed by Tom Hooper. He plays Lili Elbe, one of the first documented transgender women to receive gender reassignment surgery. Alicia Vikander, who has a whopping eight movies out this year, plays her wife Gerda in a performance that could land her a first Oscar nom in the best supporting actress race. –Ramin Setoodeh

The first photos from Toronto arrived on Saturday, 12th September
Before he went to the North-American premiere Eddie gave promotional interviews for 'The Danish Girl'. 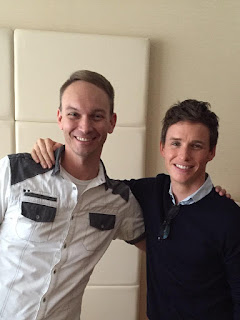 Just finished a fab interview w/ Eddie Redmayne at the world premiere of "The Danish Girl." Both he & it r MARVELOUS! pic.twitter.com/HbG3DYGQmn
— Jase Peeples (@JasePeeples) September 12, 2015