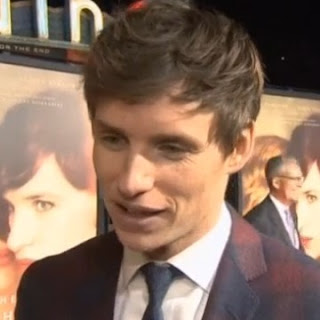 "I feel so lucky to be a part of it. J.K. Rowling has written and created such extraordinary characters and I love the world she creates, I love her imagination and to get to be a part of it is kind of wonderful but it's interesting because whenever you make a film you do it in a kind of vacuum and you don't really think about judgement - and we're making the film at the moment - but the first images came out and only then did I feel the weight of the fan base and the scrutiny but I love the character of Newt so I'm enjoying playing him."

The Harry Potter Prequel Stars Eddie Redmayne and One Killer Topcoat
By Lisa Corsillo/GQ
"...Eddie Redmayne will star in the film as Newt Scamander and, more importantly, his wardrobe will be majorly on point with expert layering (waistcoat anyone?), enviable cap toe lace-up boots, and a sick teal topcoat. Redmayne has long been a GQ red carpet favorite thanks to a suit game and formalwear skills that are nearly untouchable level. The guy was born for menswear and we’re more than a little stoked to see all the dandy sorcerer s#!+ he’ll wear as Scamander." 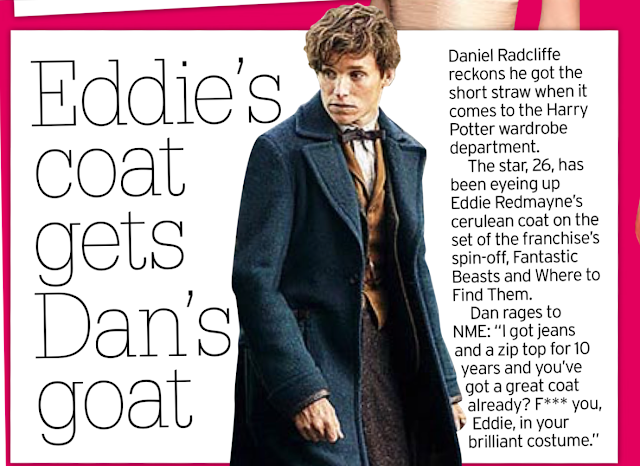 Why Daniel Radcliffe is jealous of Eddie Redmayne (x)

From The Wall Street Journal article
Is “Fantastic Beasts” easier to play, without all the physical changes?
I think it may just be my personality, but I always find a reason to worry. So with Stephen Hawking it was about letting down Stephen. With Lili’s story it’s about letting down the trans community. And with “Fantastic Beasts” it’s wanting to do justice to an extraordinary world that J.K. Rowling has created.
Do you have to deal with any live animals or just imaginary creatures?
There are some live animals. Dan Fogler [who plays Newt’s nonwizard friend] and I had to negotiate quite some epically-sized snakes the other day. We went, “Wait a second, can’t we CGI those in?”

Going down to Liverpool with ‘Fantastic Beasts’ movie  (Pottermore)
Phwoar. Travelling to Liverpool with the cast and crew of Fantastic Beasts feels like running away with the circus, though happily there are fewer clowns. It’s a huge operation, getting all the wigs, coats, stunt mattresses, posters, mannequins, sequined gowns, cameras, make-up tools, vintage cars, fake snow, tents and people to a new location. Huge....Read more
Excerpt: "Inside, Liverpool City Council staff try to get on with their day jobs knowing that Eddie Redmayne is filming downstairs. They tiptoe by, whispering, and I catch a few phrases: ‘The one who got the Oscar for that Stephen Hawking film... Yes, the young one with the freckles... Something about Harry Potter, I think... He’s just gorgeous... Oh, definitely wizards...’
Eddie, meanwhile, is quiet. He paces slightly between takes, smiles at everyone softly, sits in his black canvas chair and ducks upstairs to the green room for some solace now and then. He slips his jacket on moments before running in front of the camera, and slips it off again gently when he comes out. He and Katherine whisper to each other, maybe it’s their lines, maybe they’re telling secrets, who knows?
There’s something so right about Eddie and Katherine. They’re absolutely perfect for this movie, and I cannot wait for you to see the scene they filmed today. It’s a dramatic one. Involved a lot of running…" 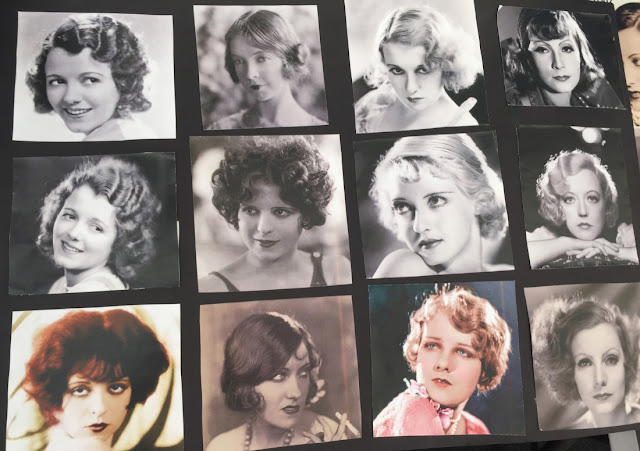 
‘Fantastic Beasts' has its own New York City (Pottermore)
Riddle me this: I’m standing on the streets of New York but I haven’t left England. I can see pretzels but I can’t smell them and I’m definitely not allowed to touch them. Where am I?
I’m on the set of Fantastic Beasts, of course. Wearing a hard hat, a neon yellow safety waistcoat and muddy black boots. Didn’t I tell you showbiz was glamorous?...Read more

Mugglenet: “Fantastic Beasts and Where to Find Them”
Roundup: On Location Again – and Jenn Murray Talks Filming 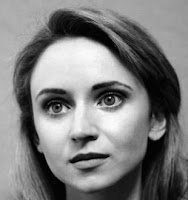 ..."I got cast in July, began August, wraps end of January. […] Because with the Harry Potter [films], they had the novels to refer to, so people knew what was going to come up […], but this is an original screenplay, and nobody knows what it’s about, really, so I don’t want to mess up."
.."The first day was really scary. We walked onto a big set, and Eddie Redmayne was there. I’ve watched his work for years. I remember him in Tess of the d’Urbervilles, and just you know, when you look at someone’s face and you want to hear to their story, and he had that, whatever that was. And Samantha Morton… I’ve admired her for so many years because of all her choices, and she’s a real actress. Took risks, was very courageous, and yet you knew nothing about her, which is what I admired the most. So I was standing there with these people, and I was just thinking, ‘Don’t get fired.’ But it was magic. It was worth it."

The film has also gone on location again, this time relocating to Cardington Sheds, in Bedfordshire, UK. The Cardington Sheds are old RAF sheds, which were used to build airships. The spaces are regularly used by films, including Star Wars: The Force Awakens – and now Fantastic Beasts. (x) 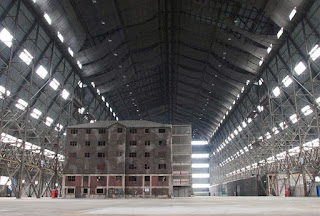 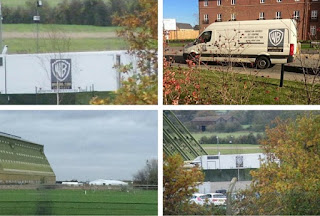 Less than a year left till the release of 'Fantastic beasts and where to find them' on 18. Nov. 2016