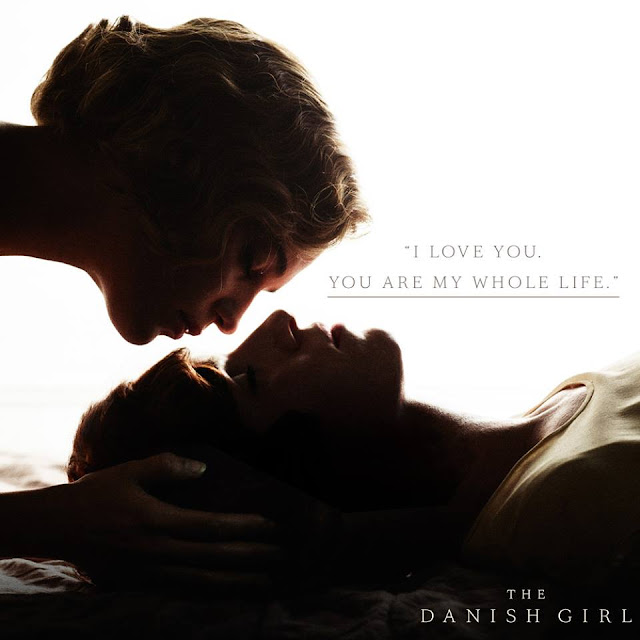 Breathtaking new promo for 'The Danish Girl' (via)
Deadline:
‘The Danish Girl’: How Redmayne, Vikander, Hooper & Kismet Made An Oscar Contender
By Pete Hammond/Deadline - Photos by ChrisChapmanPhoto.com (via bespokeredmayne) excerpts:
The film adaptation of David Ebershoff’s bestselling 2000 novel The Danish Girl was a passion project for everyone who came into contact with it.....
The director and his two stars discuss how the The Danish Girl was a life- and career-defining experience. 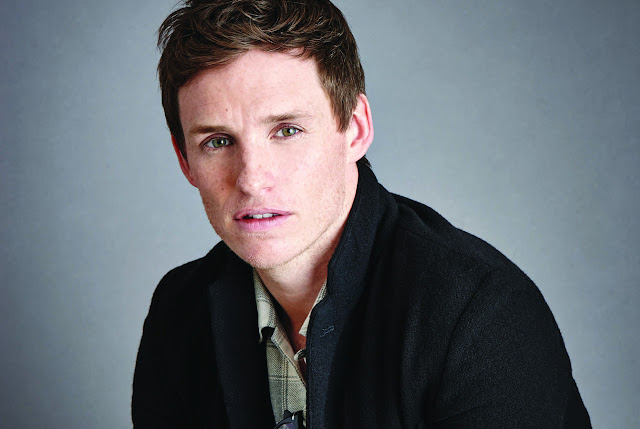 Photo by Chris Chapman - source hope72
The Change-Up Artist
The role of Lili Elbe has been with Redmayne now for a few years, since he first received the script for The Danish Girl from Hooper, who was then directing him in a scene for Les Miserables and handed it to him between takes. It would be just a matter of time (well, years) before the film finally became a “go,” but even through Les Mis, Jupiter Rising, The Theory Of Everything and its Oscar campaign—which had him coming back and forth to Los Angeles—and his own wedding, Lili always was there in Redmayne’s head.

“I’m one of those people who, the more you have on your plate, the better. When I am on holiday it can take me days to do virtually nothing, whereas when I’ve got lots of things going on I tend to be able to focus more,” Redmayne says on a rare day off from yet another major project, J.K. Rowling’s Fantastic Beasts. He’s now trying to squeeze in promotional time for Danish Girl during breaks from that production.
His journey with Lili has been inter-connected from one set to another. At one point when he was shooting Jupiter Rising, co-director Lana Wachowski, herself a transgendered person, helped him out. “I started educating myself and I mentioned Lili’s story to her, and she was passionate about both Lili and Gerda and talked to me about their art and really told me where to start,” Redmayne recalls, adding that everywhere he went during the promotion of Theory Of Everything he would meet people from the trans community. It all added up
“The script, when Tom handed it to me in a plain brown envelope during the Les Mis “barricades” scene, was unlike anything I had ever read. It was a love story and I felt it showed to me that love was about souls rather than (something) defined by anything else—gender or bodies. It was something other,” he says. “There was one trans woman I met in Los Angeles and she said that she would give anything, anything to live an authentic life. That, in a sense, involves ultimately looking into yourself and finding yourself.”
Redmayne’s physical transformation in portraying Stephen Hawking in last year’s Theory Of Everything is what many people believe propelled him to the Best Actor Oscar. Lili Elbe is yet another stunning metamorphosis for Redmayne, one that is sure to land him a consecutive nomination in January. 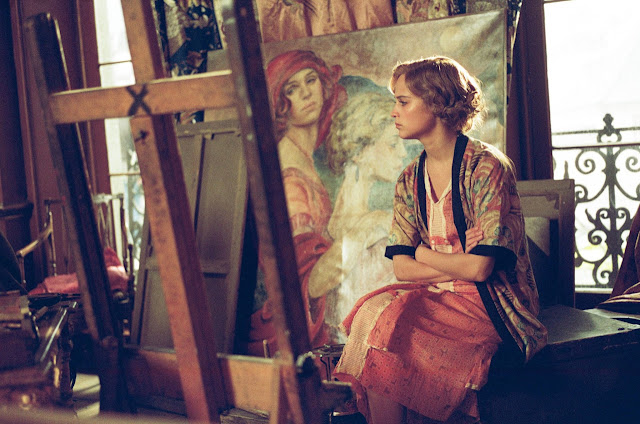 For Vikander the opportunity to play Gerda was fated.
“I remember I had heard about this film, Hollywood had been trying to get it made for a long time,” she says. “I even had friends who were on previous (casting) rounds years ago. But I think it was one year ago when I sat on the tube in London and read about the fact that Tom Hooper and Eddie Redmayne announced they were finally going to try and get the story told. I thought, ‘Wow, that is incredible casting.
I really look forward to seeing that film.’ ” Two days later, Vikander’s agent called informing her there was a second female role and she should read for it.
When the time came for the audition, Vikander thought she blew it because Hooper just sat there. (Unbeknownst to her, he was weeping.) Needless to say, those first glimpses of what would be a devastating performance got her the part. Vikander has been grateful to Hooper and Redmayne ever since for helping her navigate the way into Gerda. “From the start, Tom told me his vision for this woman, who really is able to almost love another person more than herself, or at least be able to look aside of a difficult path,” Vikander says. “It’s an extremely unique love story about the struggle of two people who go through a big change, but together—going through a transition but on two different sides of the road, parallel to one another. The braveness and the courage that they had to support each other, above anything, was what got
to me from day one.” And the chemistry with her co-star was instant.

“Eddie is probably one of the most humble, sweet and wonderful people that I’ve ever met,” she says.
“While we were filming, he actually jumped on a flight just before the Oscars and went straight to L.A. Then, of course, he came right back, on Tuesday morning, straight from the airport, back to his trailer, and he probably did one of the most difficult scenes in the film, straight off the plane,” she says. “I thought that was extremely admirable. He could just be 100% of his role with us.”... 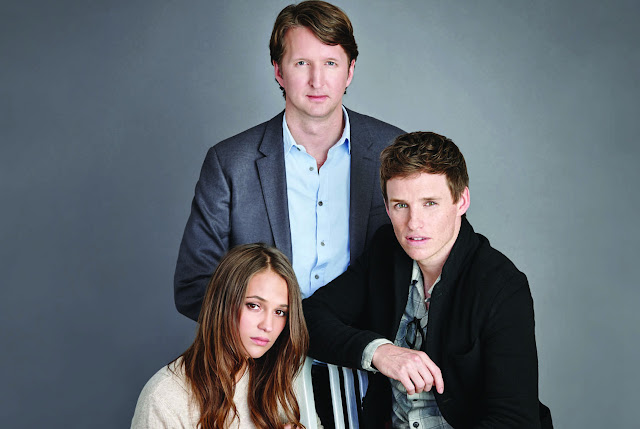 For Hooper, this film was a no-brainer. “This is what I wanted to make, and in the end I feel like you’ve just got to follow your heart,” he says. “For me, I have to fall in love. If I’m not in love with a project, I don’t want to spend two, three more years of my life on something. There are people who would’ve happily seen me not do this, supposedly because they thought it was risky or whatever, but it was what my heart told me to do.” - Full article here 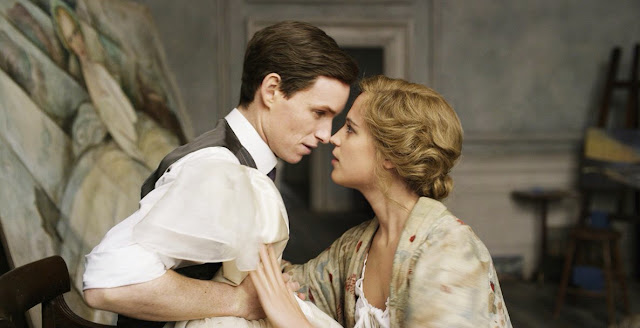 Eddie and Alicia in The Danish Girl (x) 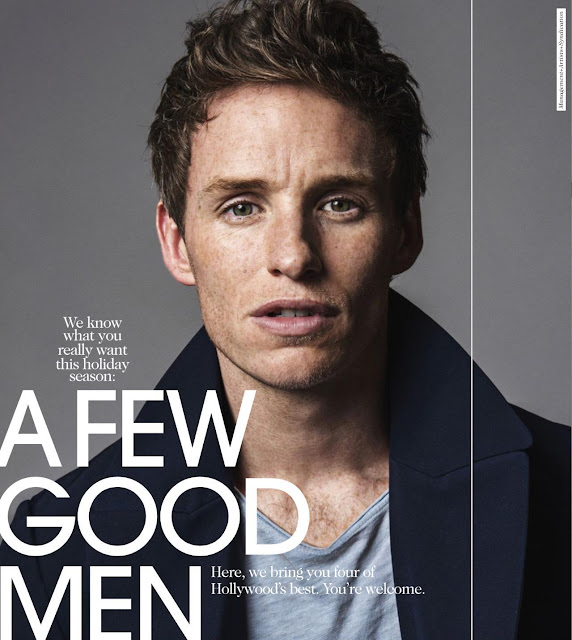 Click on the pictures for full size!
HOW EDDIE REDMAYNE EXPERIENCES THE MALE GAZE
The article on the web


LA Times (via):
Eddie Redmayne and other recent Oscar and Globe winners are likely to be back for more 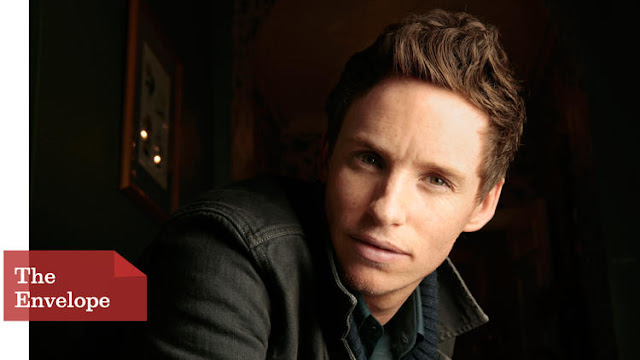 Two weeks into shooting “The Danish Girl,” star Eddie Redmayne needed a long weekend off. And with good reason: He wanted to attend the Academy Awards, where he’d been nominated for his role as Stephen Hawking in “The Theory of Everything.” Director Tom Hooper let him go and when he returned to the set one major change had occurred — Redmayne was now the winner of a lead actor Oscar. No surprise: It’s now the end of 2015 and Redmayne is yet again part of the awards season conversation. He’s in good company — this year many of the biggest winners from last year’s awards (Julianne Moore, Michael Keaton and Alejandro G. Iñárritu for a start) have landed right in the current season. In addition, virtually guaranteed-an-award names such as Steven Spielberg and Tom Hanks (“Bridge of Spies”) and Meryl Streep (“Suffragette”) are possibly also in the running. “We probably chatted about the Oscar for five minutes and then I glanced at my watch and said, ‘Let’s get back to work,’” recalls Hooper, an Oscar winner himself for 2010’s “The King’s Speech.” “The extraordinary thing was he was literally unchanged after the weekend — some people would want to do a victory lap. All he wanted to do was get back to work.” - read more 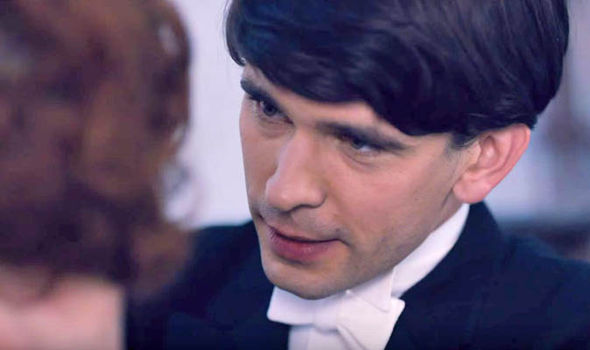 Ben Whishaw on kissing Eddie Redmayne in The Danish Girl:
“We’d met before for a beer, which doesn’t make it any less peculiar, to be honest.“
(source: esquire.co.uk via  bespokeredmayne)

Hollywood News: Hollywood Contenders: Will transitioning Eddie Redmayne lead to Oscar glory for “The Danish Girl” in Best Makeup & Hairstyling?
Actors are chameleons, by their nature masters in convincingly becoming other people. But actors can only go so far in persuading an audience that they are from a different galaxy, are actually a different species, lived hundreds of years ago, have become seriously disfigured, and/or are 40 years older than they are. Assisting them in this task are makeup artists and hairstylists.
The Academy Award for Best Makeup & Hairstyling has its nominees chosen in a different manner than any other branch. Notably, there are only three nominees. Interestingly, they are chosen from a list of seven (who are chosen after what is frequently called the “bakeoff”). Those seven finalists make submissions and presentations to the branch, leading to the trio chosen as actual nominees. Up to three makeup artists and/or hairstylists can earn a nomination for a film, though it is often difficult to predict who they will be in advance, as most makeup and hair crews are comprised of many more than three members.
What does the branch tend to reward? Well, it depends. Looking at this decade’s nominees, there are many examples of creating monsters and other non-human creatures (“Guardians of the Galaxy,” “Harry Potter and the Deathly Hallows – Part 2,” “The Hobbit: An Unexpected Journey,” “The Wolfman”). Other nominees have aged actors in incredibly convincing ways (“Barney’s Version,” “The Iron Lady,” “Jackass Presents Bad Grandpa,” “The Lone Ranger”). But many simply transform actors into another time period and/or help them become original or real-life characters in ways that make one gasp “wow” (“The Grand Budapest Hotel,” “Hitchcock,” “Albert Nobbs,” “The Way Back”). It would be fair to say that the “makeup” part of this category usually predominates over the “hairstyling” but that is not to say that hairstyling did not play a massive role in some of the foregoing nominations (2009’s “The Young Victoria” was likely nominated first and foremost because of the hairstyling). - read more

Eddie Redmayne is nominated as best actor for the Prime Awards
(x) (via)
You can vote here!

USA Today: 7 Oscar-worthy films to finish out 2015
The Danish Girl (Nov. 27)
Eddie Redmayne, last year’s best actor winner for The Theory of Everything takes on another transformative role: As artist Einar Wegener, who transitions to Lili Elbe in 1930, becoming the first known person to receive gender-reassignment surgery in 1930.
One of the keys for Redmayne was talking to real trans women about their experiences, and one of them told him that the early period of transitioning is one of “hyperfeminization,” he says. “As you’re finding your feminine self, you’re using makeup and clothes but you’re perhaps going too far. She described it almost as like a girl’s adolescence — what girls do in their puberty years of trying things and putting on too much makeup and wearing skirts that are too short.
“I wanted to make sure that we found that,” the actor adds. “She’s finding her femininity, but then toward the end of the film, she’s stripped bare and she’s found herself, really.”