Video: Eddie Redmayne about working with Tom Hooper, and the artistry of making a film about
artists....the reception The Danish Girl has received so far, and the exploration of Lily Elbe
removing society’s trappings to find herself. . Note: The dog nailed that role :D :D :D

Alicia Vikander also discusses her education, revelations, and exploration of transgender issues in preparation for the role of Gerda Wegener. The cast talked about the (sometimes difficult) experience of watching themselves on screen, and director Tom Hooper delves further into the making of the film.(x)

(x)
entertainment.suntimes: Eddie Redmayne learned a lot about women - by playing one
...Asked what he would have liked to ask the real Lili Elbe if he could have traveled back in time and met her, Redmayne said, “I first of all would have liked to understand how she had the courage to do something for which she had no predecessor to look to for advice. Back then, there was almost no language to talk about what she was going through.” Then, the actor added he would likely have asked Elbe the same thing he asked the contemporary transgendered women and men he met as he prepared for the role.
“One women’s answer really has stuck with me. I had asked her — as I did everyone else — ‘When you were transitioning, at what point were you the happiest?’ “She smiled and told me about a day when she was sitting on a bench in a park. Kids were playing around her. Birds were flying above in the sky. There was nothing special going on, but she was overwhelmed by a sense of contentment — finally being a woman and being her true self, looking out at the banality of an everyday experience in a park. “That’s what I would have asked Lili.
When were you the most happy?” 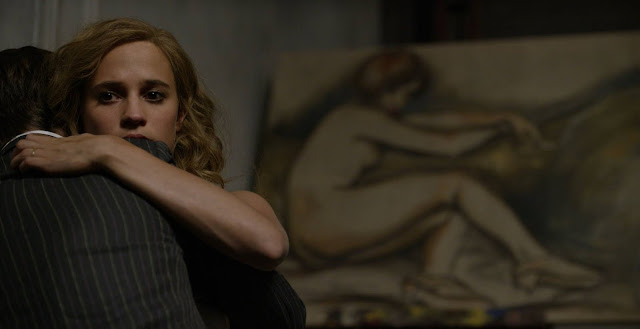 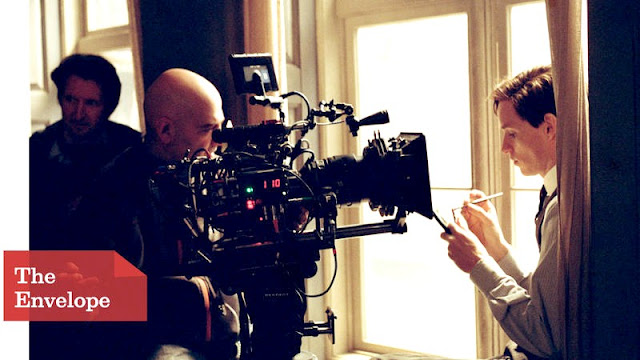 LA Times:
The cinematographer of 'The Danish Girl' and 'Room' details shooting such 'extreme opposites'
Q: While filming intimate scenes, such as Eddie observing his naked body in a mirror, how did you remain unobtrusive?
A: That was filmed on a location in London, which is Wilton's Music Hall, which has these amazing distressed textured walls. You very much have to be mindful that you don't want to clutter the world with lighting stands and equipment, because it can easily just take away from the moment. So in that instance, we did really simple lighting to make Eddie look amazing. It wasn't much more than a few hanging light bulbs, and a little soft light that he walks into. It's important that — not that they would be intimidated — but you really just give the actors a lot of space, and especially a scene like that, or the scene when Eddie goes to the Parisian striptease.
Q: What inspired the film's look?
A: There's a Danish painter called Vilhelm Hammershøi. And that was where all the conversations began, just because if you look at his paintings, he's got a very austere, quite hardcore approach to where he puts people in the frame, the colors of the paint, how he uses shadow. It's so full of ideas. We stole liberally...full article 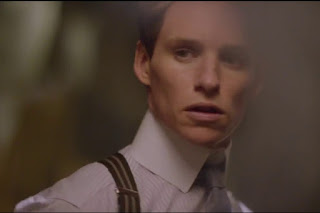 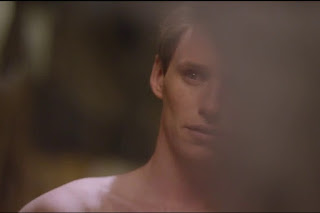 (x)
The Economist: Becoming "The Danish Girl"
As Einar continues to cross-dress, there is the distinct sense—captured brilliantly by Mr Redmayne’s performance—that each step in heels, each feminine twist of the neck, is taking him further down a path from which it will become increasingly difficult to return…
‘Much of his transition is also about the performance of femininity, a masterclass in physical transformation that recalls Mr Redmayne’s painstaking portrayal of Stephen Hawking in “The Theory of Everything”. Einar studies women at fish markets and peepshows, mesmerised by their gestures and expressions. As he adopts them, these movements call Lili forth like a figure from a block of marble, revealing as much as creating her. Einar also stops painting when he transitions to Lili, as though the construction of this identity becomes his art, the thing that he has, in some sense, been trying to paint all along.
“The film has been criticised on two fronts. First, for casting a straight, cisgender man in the role of Einar/Lili, though it’s not quite clear why this is a problem since characters in any story aren’t meant to be reverse-cast as themselves. As Mr Redmayne has commented, this is a performance: “Look I’ve just played a man in his fifties with motor neurone disease. I’m acting.” The more compelling criticism is that the film foregrounds Gerda’s perspective, making it more about her coping than about Lili’s life-changing transition. In one of many scenes from Ms Vikander’s memorable performance, Gerda comes home expecting Einar, and discovers Lili instead. We see Gerda’s bafflement and distress, while what is going on inside Lili is harder to detect.
“Much as the film seeks to empathise with Lili, it probably won’t be possible to fully deliver that perspective until a transgender director takes the reins. But this doesn’t make the story “wrong”. Gerda’s experience, mainstream or not, can hardly be deemed invalid. In some ways, the film is simply representative of today’s particular moment—of the striving, in more prominent ways, to understand and support the transgender community. But Lili’s perspective, even if it isn’t foregrounded, is still haunting in the moments when it shines through: She longs to wear Gerda’s silk nightgown to bed, she explains, because when she wears it, she dreams Lili’s dreams.” (via) 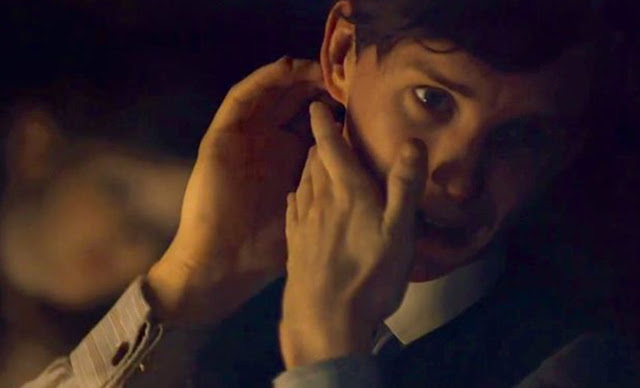 redbatchedcumbermayned's thoughts on the film
As you all probably know by now I was invited in the middle of November to attend a screening of The Danish Girl in New York with BespokeRedmayne courtesy of Focus Features. What follows is not so much a review (there are countless out there, either praising or condemning the film), but my thoughts on those scenes that impressed me the most. Read more