Independent.ie interview with James Corden, in which he mentions Eddie. As adolescent they went together to local after-school drama club, the Jackie Palmer Stage School.
One chance after another

STEPHEN MILTON – 25 OCTOBER 2013  full article
When, as an adolescent, James Corden enrolled in his local after-school drama club, it was simply a way to keep him entertained and out from under his parents' feet till dinner time.
The tubby youngster never saw it as a stepping stone to stardom and none of the other theatrical acolytes appeared to have that emergent Hollywood sheen – even fellow attendees Eddie Redmayne and Aaron Taylor-Johnson. 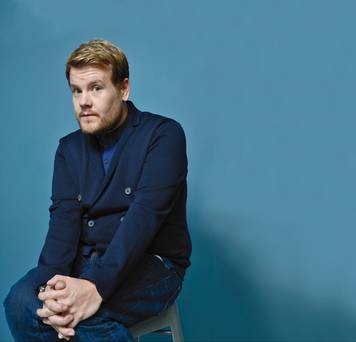 "It was called the Jackie Palmer Stage School in High
Wycombe," the actor casually explains, surprisingly chipper after a drawn-out day of promotional interviews.

"I did it for five or six years, where we'd put on shows and musicals and the funny thing was, in just little High Wycombe, small-town Buckinghamshire, there was me and Eddie Redmayne and Aaron Johnson all in the same group."
"Isn't that kind of crazy? Eddie was the best choir boy and would always sing Walking in the Air, while Aaron was a good bit younger so he would be dressed as a squirrel doing something in the background.
"And I would be singing Nicely Nicely from Guys and Dolls, doing my thing. It's just funny how it all turns out – that out of a group of not too many kids, there's quite a few there who've done good."

Something of a slight understatement, let's be honest. Redmayne's cherubic vocal stylings landed him a lead in Les Miserables while Taylor-Johnson's penchant for dressing up led to comic-book movie action, Kick-Ass, Godzilla and the forthcoming Avengers follow-up.

And Corden? Well, he's not doing too badly himself. There's his career break as lovable layabout Smithy in Gavin and Stacey; a Tony award for Broadway stage hit One Man, Two Guvnors; hosting duties at the Brits for the last three years, bessie mate status with David Beckham and Harry Styles and a flourishing movie career; his latest role in musical Into the Woods, alongside Meryl Streep and Johnny Depp, solidifying his new Hollywood credentials.

Eddie with James Corden at the Critics' Circle Theatre Awards
at the Prince of Wales Theatre. 24 January 2012 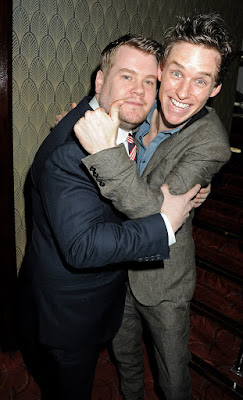 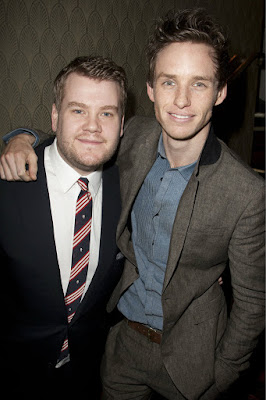 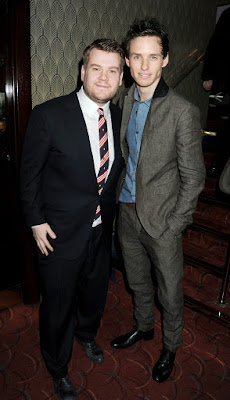 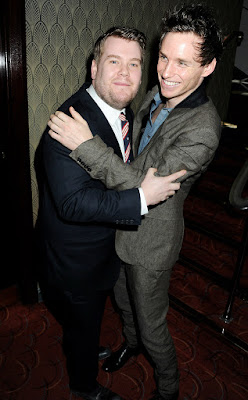 Jackie Palmer Stage School / past_pupils
The list includes Christian Bale too! He was the pupil of the school earlier.
Posted by Jutka at 8:18 AM