My ToE promo video playlist, articles and pictures from this week

This was a very busy week. Eddie continued his ToE promo tour in Chicago, then in New York. He did a few Q&A,
gave interviews, attended some events. Everything happened so quickly. I could't cope with so much stuff in such a short time, I'm a little behind. There are a lot of new articles, photos, videos and pictures about him, that I like and
want to post in my blog. Here are a few.
Let's start with the video interviews. My Youtube playlist starts with this weeks new videos
but at the end there are a few I already posted about
The first video is BAFTA's 60 seconds with Eddie Redmayne published on Wednesday.
Eddie Redmayne breezes through the 60 second challenge, revealing his unusual method for learning lines, why
he likes "having no idea what's coming next" and why you'll probably find him in the bath after a long shoot!

This cute video about Eddie followed by this weeks videos of Eddie promoting 'The Theory of Everything'.
Then the interviews and Q&A videos I already posted. The upcoming updates will be in the end of the list. The most interesting article I think is the long interview by Eddie's longtime friend Clemency Burton-Hill published in the Intelligent Life Magazine. … I had happened to see Redmayne a few hours after he received a phone call offering him the lead in “The Theory of Everything”, a feature film adapted from a memoir by Stephen Hawking’s ex-wife, Jane Wilde. We had been friends at university and our professional lives had collided over the years—I had interviewed him about his Richard II at the Donmar Warehouse and his Marius in the blockbuster film of “Les Misérables”. That evening, I watched as his euphoria subsided into a creeping sort of horror and his skin, always rather freckled and pale, took on a greenish tinge. At this point I asked, on a whim, if he would be open to the idea of my following him as he tackled the role. I knew he disliked talking about himself, but perhaps the fear distracted him. He said yes…

My note: Eddie is a formidable actor, but still few people know who he is. I think this quote in the article from Tom Hooper reveals the cause of this: “His ability to disappear into the personalities he’s creating is very rare. There’s a
type of film acting in which the audience want to see the actor they know and love, but Eddie seems to be drawn to these roles that require a lot of work to disappear into something that’s not him.”
- He's not Eddie Redmayne, he's Tony, Gordy, Angel, Osmund, Jack etc. in the films.


EDDIE REDMAYNE'S SCIENCE JOB - full article
The editor's note ~ Posted by Tim de Lisle, October 15th 2014 (x)
...The day after our last issue closed, an e-mail came in from Clemency Burton-Hill, who wrote our cover story on Gustavo Dudamel in 2013. She had embarked on a piece about Eddie Redmayne. “I realise most actors are far from your Platonic ideal, being PR’d to within an inch of their lives,” she wrote, “but Eddie is a different kettle of fish—clever & thoughtful, and he has had this extraordinary year playing Stephen Hawking for ‘The Theory of Everything’, for which I’ve been quietly observing him at close quarters...” Quietly observing: that sounded like us.
Clemency’s piece is not a profile of Redmayne, although you get to know him reasonably well by the end of it: it’s the story of a project....

ACCESS HOLLYWOOD VIDEO INTERVIEWS:
Eddie Redmayne On Channeling Stephen Hawking In 'The Theory Of Everything'

How did he prepare for the role? Plus, what was it like meeting Stephen? What were the biggest challenges?

Eddie Redmayne On Learning To Communicate Like Stephen Hawking
How challenging was it to learn and utilize the different methods of communications available to Stephen? 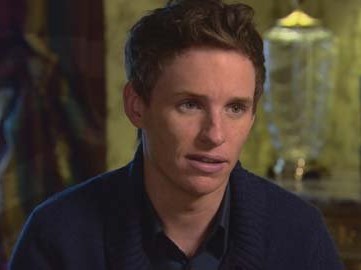 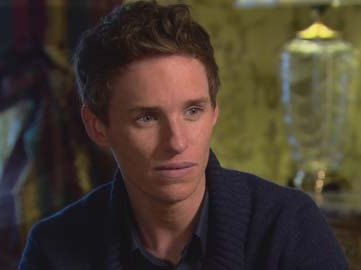 THE LIFE OF THE MIND: MAKING THE THEORY OF EVERYTHING
The Credit | October 16, 2014 | By Bryan Abrams - full article

...Casting is always crucial, but in this case the film not only falls apart if the wrong person is cast as Hawking, but is potentially insulting. Hawking the human being is much more than his famous brain, his illness, his computerized voice and even his well documented sense of humor. The Stephen Hawking portrayed in Jane’s book is a conflicted, complicated, and for a time desperate and depressed individual. This is to say nothing of having to portray someone who gradually lost the use of their body, from a vibrant and healthy 21-year old to a middle aged man with the use of only a few muscles, someone who had to refashion an entirely new way of communicating with the outside world.
Enter Eddie Redmayne, best known in America as Marius in Les Misérables. He pored over every detail of description of Hawking in the book and in his research...
read more about Eddie's preparations and the filming here 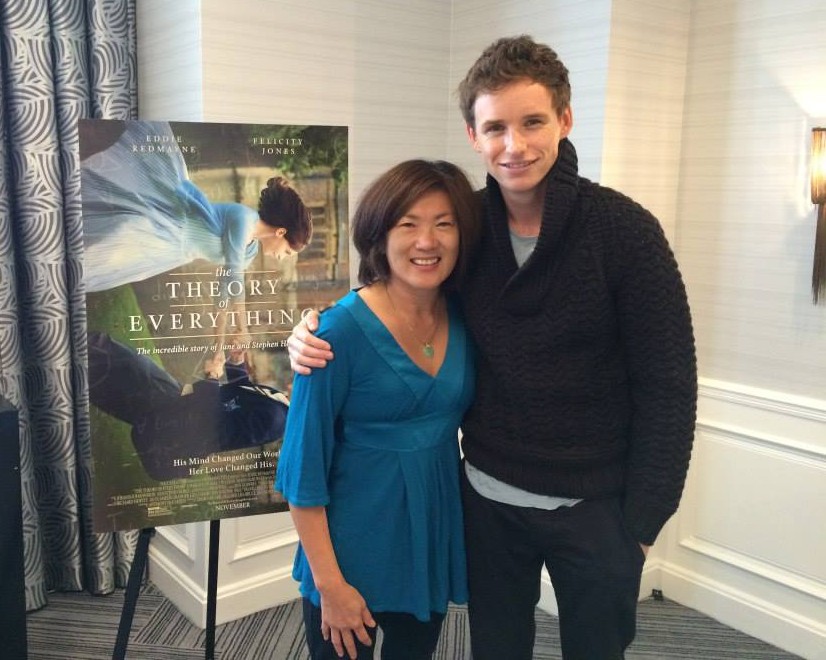 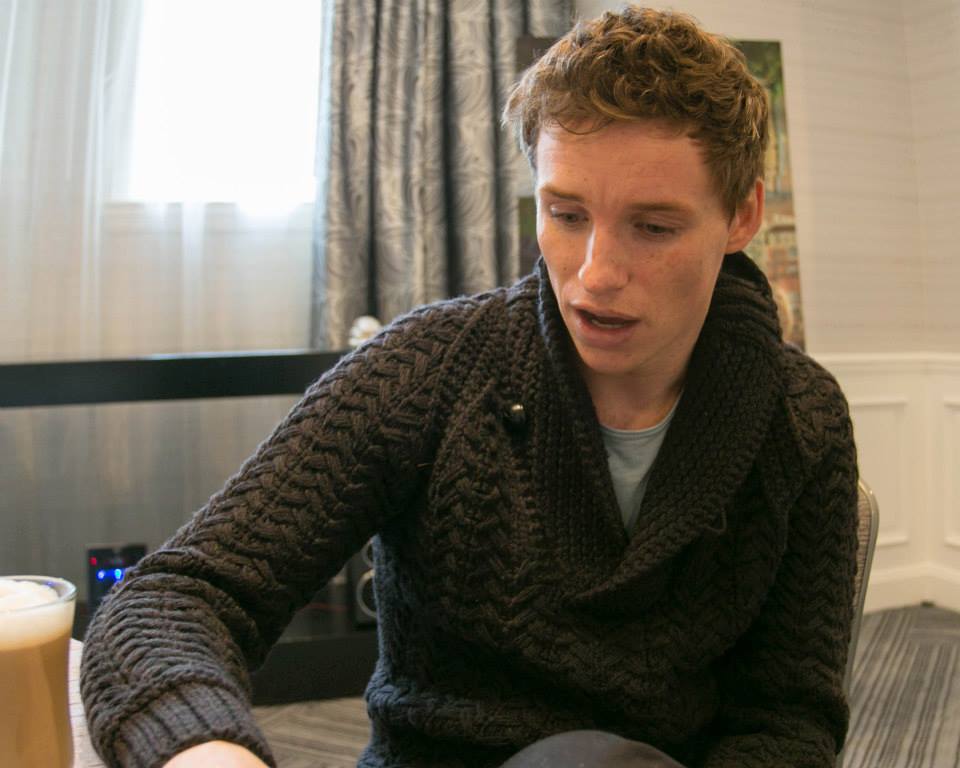 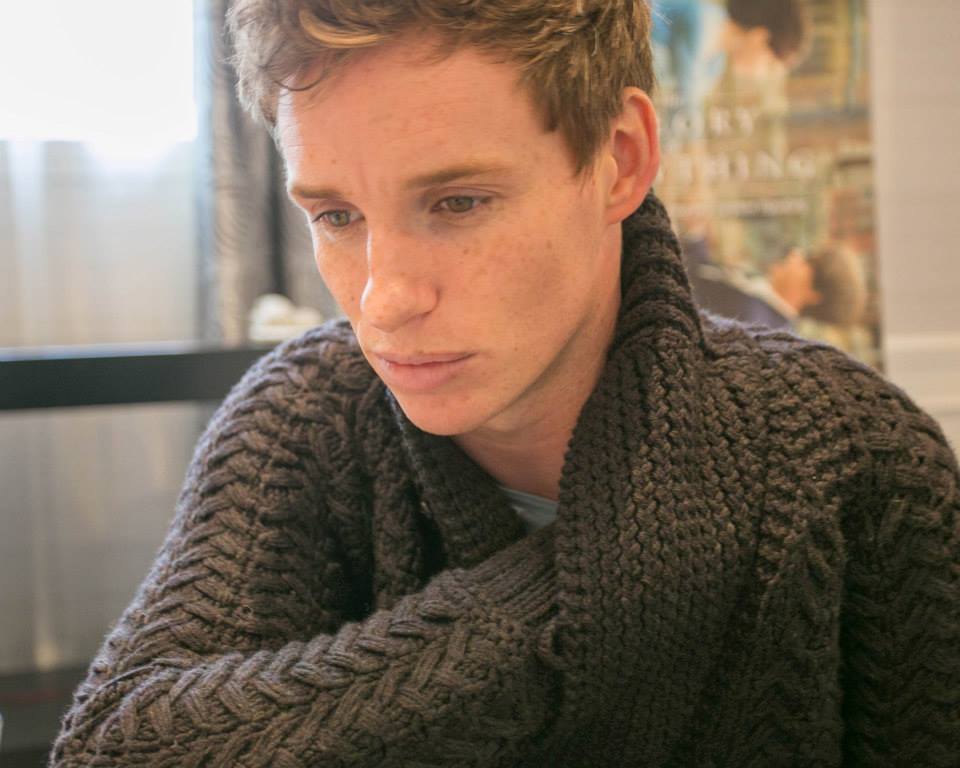 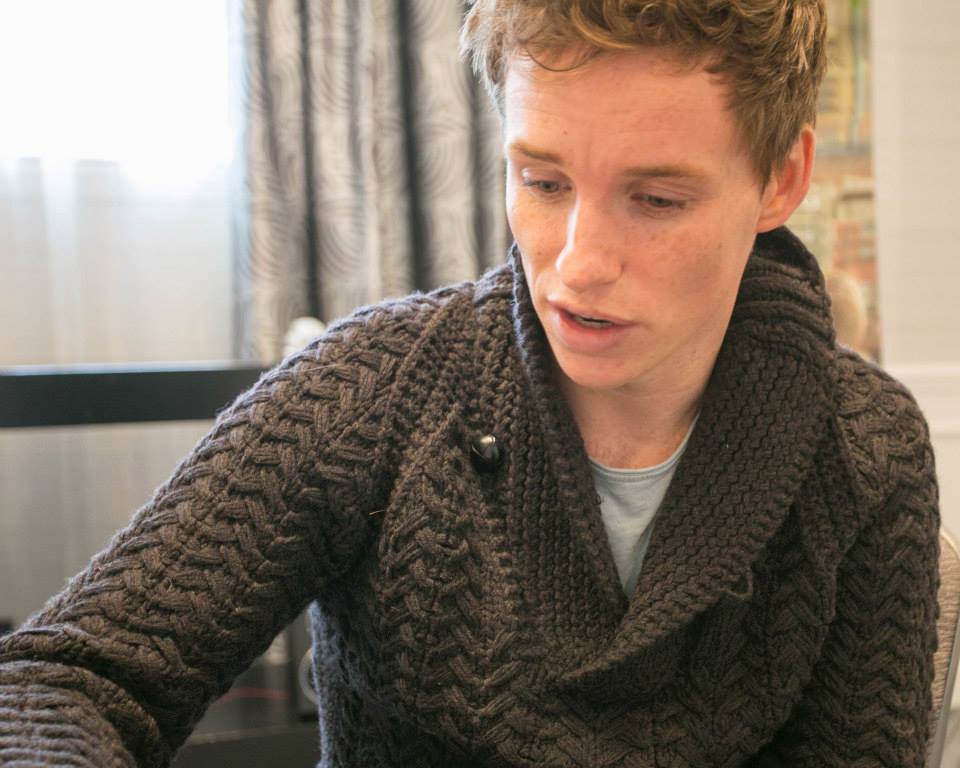 Eddie Redmayne quote: "I would love one day to direct. I feel like writing is a big part of an actor’s, not job, but really working with writers is quite an important thing just having that dialogue as you begin to know a character backwards, working out what’s sound, what’s true." 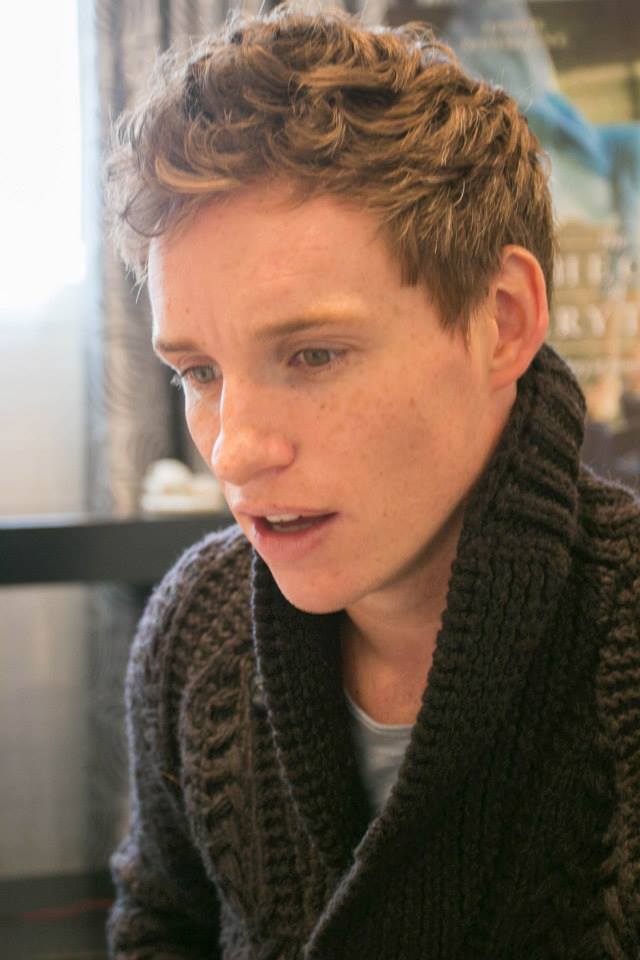 The questions of the interview:
- Looking back on your career so far, what were the pivotal moments for you as an actor?
- Are you interested in getting into directing or writing?
- How do you get into character? You completely submerse yourself into each character.
- Every nuance of your face, which was how isolated Redmayne’s performance of Hawking became, was amazing.
- How has your family reacted to your journey as an actor?
- What are you reading right now?
- What television shows do you watch?
- What’s your favorite movie?
- Do you like watching yourself in movies?
- Are you social media? Are you tech savvy?
- Dog or Cat?
- You’ve portrayed a lot of real life people. Years from now, if someone were to portray you, who would you want that to be? (Based on actors of today)
You find Eddie's answers in the full interview here.

Clémence Poésy quote from the interview:
“Eddie is wonderful. He is one of the few actors who could play a character like Stephen in Birdsong, from a young man falling in love at 20 to a haunted man of 35 who has been through a war. When we filmed the scene where my character Isabelle and Stephen meet up years later, it was extraordinary. Eddie walked into the room and it was as if the war had come in with him, his eyes had the haunted
look of someone who had been through something dreadful. It is an amazing performance because
he does so much without word.” 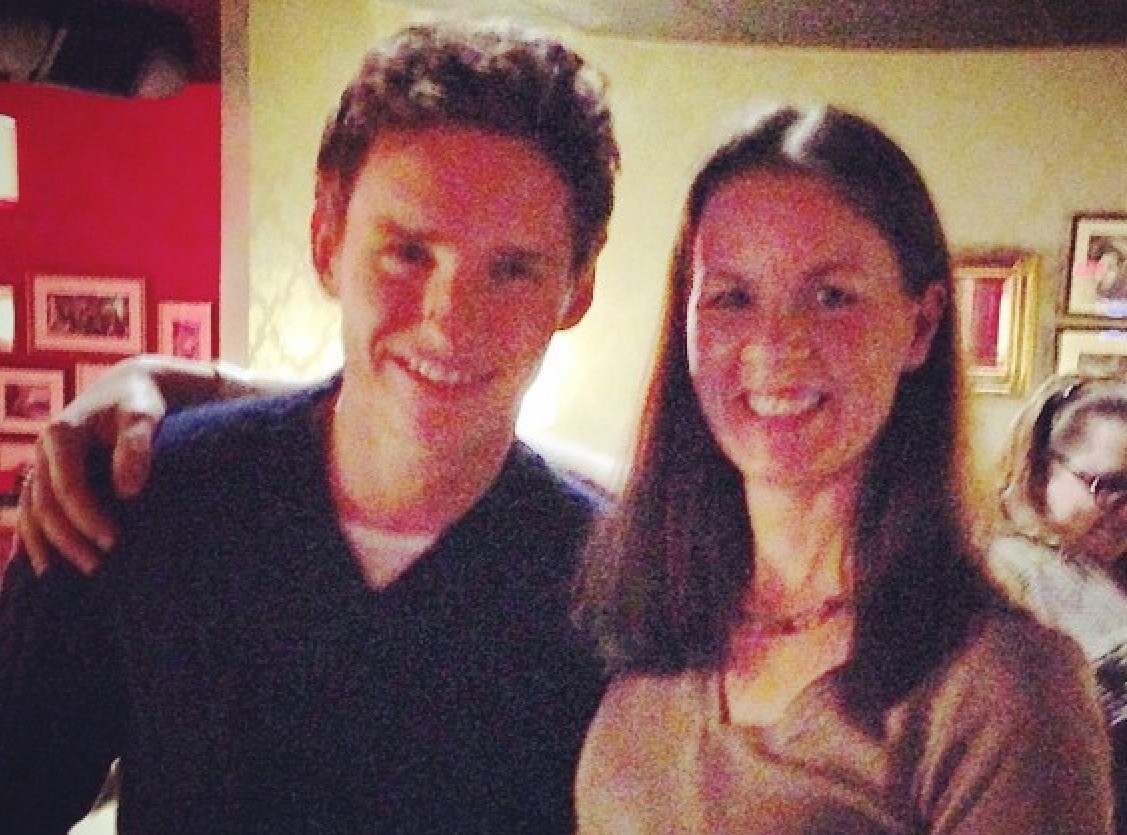 bespokeredmayne: Eddie Redmayne continues promoting The Theory of Everything in Chicago on Oct. 14, 2014.. Top credit: Instagram capnsam, bottom Instagram erikaolson:
“Thanks to completely crappy Chicago weather, 3 other critics and I got to hang (and drink!) by ourselves with #Eddie Redmayne for an hour tonight in advance of a #Theory of Everything screening. He is hilarious, down to earth, humble and awesome.” (X) (X) (X) (X) 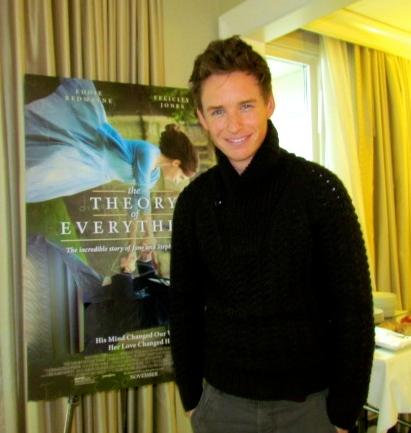 ahomegirlslife: #MCM goes to Eddie Redmayne because I got to meet him tonight. Landmark Theatres: The Theory of Everything by director James Marsh
...The most significant choice I made in the film, like in every other, was in the casting of actors, though the stakes felt much higher this time around. Stephen is an iconic presence in our culture, and most of us have a pretty good idea of what he looks like—and the obvious fact that he doesn't really look like most of us. If the performance struck one bum note anywhere in the film, the film itself wouldn't survive it. So I met Eddie Redmayne, whom I knew had an abundance of talent but had never carried a film of this weight before. During the meeting, he drank a lot more beer than I was expecting—and I saw not only a burning passion to play Stephen but also the right amount of trepidation, which would account for the beer.
It took months and months of preparation, but Eddie became Stephen Hawking across 25 years of inexorable physical decline. On any given day as we filmed, he might be an able-bodied young student, a newly married man struggling with two walking sticks, or a middle-aged man slumped mutely in a wheel chair, barely able to move a finger. The best compliment I can pay him is via Stephen Hawking himself who declared that at some points in the film he thought he was watching himself. He was so taken with Eddie's performance that he offered us the use of his signature electronic voice—so the voice you hear in the movie is his... via (x)

Not new pics, but who cares! Lots of eye candy:
45 Eddie Redmaynes You Need To See Right Now via (x)
gifs and photos selected by juliegerstein