Luncheon at The Lotos Club on Oct 21 in NYC, new articles and video 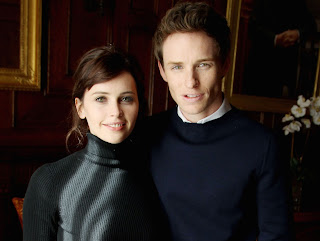 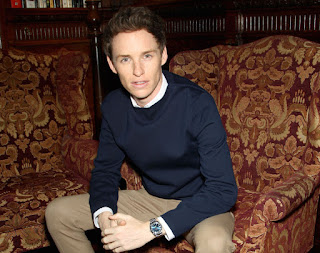 The potential Best Actor nominee charmed Academy members at a lunch in honor of "Theory of Everything" this week.
...The "Theory of Everything" star was in his element at Tuesday's posh luncheon for the Focus Features' Oscar hopeful, wining and dining with the Academy and charming members of the press (myself included).

Shortly after sitting down at The Lotos Club in the Upper East Side, a beaming Redmayne launched into conversation, professing his admiration for Indiewire (no joke), telling me that he was "gagging" to see "Interstellar" and "Birdman," and that he loved "99 Homes," which stars his "best friend" Andrew Garfield. After learning that I pursued acting before becoming a journalist, Redmayne recounted the time he flubbed his audition for the role of Bilbo Baggins in "The Hobbit" trilogy by putting on an affected voice and a bad experience as a waiter at the British equivalent of the Daytime Emmy Awards... 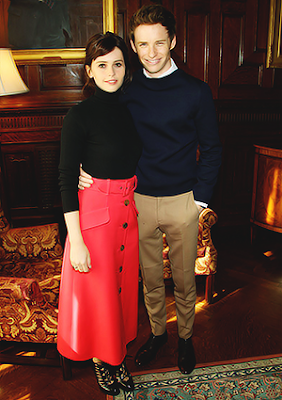 Eddie Redmayne attends a luncheon for his new film The Theory of Everything
at The Lotos Club on Oct 21 in New York City (x)
Daily Mail:

The Theory of Englishness: Eddie Redmayne is preppy in a shirt, jumper and chinos
with co-star Felicity Jones in New York Lovely photo gallery captures offscreen chemistry between Eddie Redmayne
and Felicity Jones and Eddie’s preppy sizzle. (x)
JustJared:
Eddie Redmayne Created a Chart to Help Him Shoot 'Theory of Everything'
“I ended up literally doing a chart of every muscle that was going and where the voice was, things like whether he was on one stick, two sticks, which chair he was in, what glasses he was wearing, so I would have a way to jump in and out,” (x) 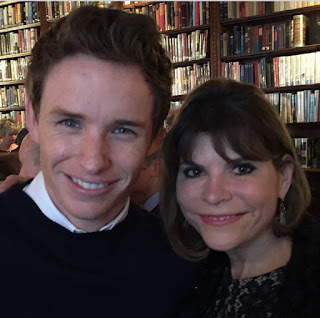 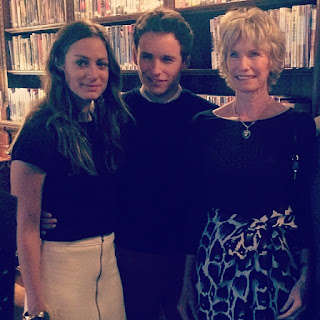 redbatchedcumbermayned: Eddie Redmayne and Ivana Lowell at today’s lunch to celebrate the imminent launch
of The Theory of Everything, in which Eddie stars BRILLIANTLY as Stephen Hawking, the wheelchair-bound astrophysicist and author of A Brief History of Time. Eddie’s superb performance is eminently Oscar worthy.
He’s also wonderfully bright, engaging, and adorable. (x)
katievansyckle: Eddie Redmayne -- perfectly dressed--with his finance Hannah & Mum
Time:

Watch Eddie Redmayne as Stephen Hawking in Exclusive The Theory of Everything Clip
The young Hawking was quite the charmer, as this new clip shows
...In this scene, premiering exclusively at TIME today, Hawking’s remarkable curiosity about how the world works starts to win over Jane during the university’s famous annual May Ball.

Deadline Hollywood:
Why Did Stephen Hawking Film ‘Theory Of Everything’ Take A Decade?
Scribe Anthony McCarten Explains
...Eddie Redmayne looked a bit misty eyed as he emerged from the MOMA screening room after the rousing applause that followed a teary-eyed New York premiere of The Theory Of Everything from Focus Features. Redmayne’s reaction is understandable, given the outsized performances he and Felicity Jones turned in as physicist Stephen Hawking and his first wife Jane. Redmayne’s portrayal humanizes that iconic image of the genius frozen in a ruined body, and the Like Crazy star Jones shines as the strong-willed woman who fell in love with Hawking when he was an awkward but able-bodied college student, and refused to allow his brilliance to dim even after his motor skills failed.
Redmayne’s reaction mirrored that of Hawking himself when he saw the film; no matter how far The Theory Of Everything goes in the Oscar race — I think it will go far — screenwriter/producer and flame-keeper Anthony McCarten cannot imagine the Hawking moment being eclipsed. “There have already been a number of contenders for the big moment, but Stephen having a tear wiped from his cheek by his nurse after the lights came up during a screening for him, that is hard to beat,” McCarten told me. “There was 10 years spent waiting for that.”...

...“Eddie was on my short list from the beginning, and Working Title loved working with him, but it came down to James talking to Eddie. When James reported back, he found Eddie’s passion was off the charts. We became guided by Eddie’s passion.’... 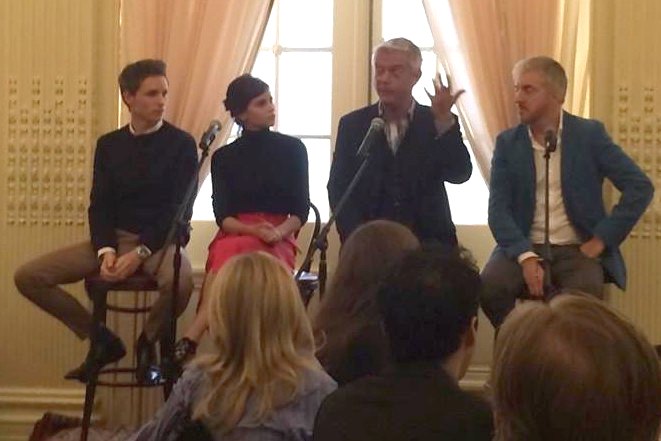 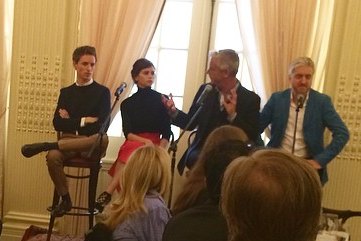 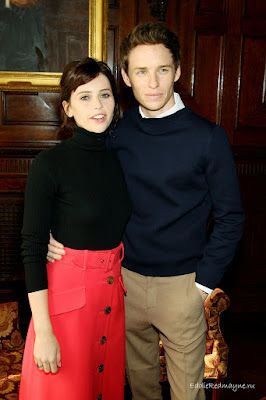 ...two high-profile films, "The Theory of Everything" and "You're Not You," will tackle ALS head on. Moviegoers will get a fuller picture of how the illness affects the brain and spinal cord's nerve cells, eventually shutting down muscle control and completely paralyzing sufferers while their minds almost always stay alert...
Update 26 Oct. 2014:
New eddieredmayne.ru gallery pics 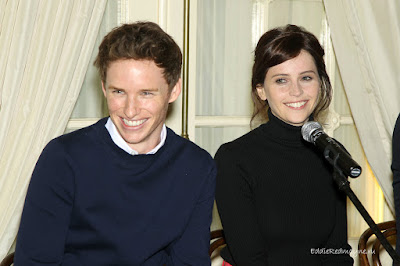 celebs-life: Felicity Jones attend the ‘The Theory Of Everything luncheon

Email ThisBlogThis!Share to TwitterShare to FacebookShare to Pinterest
Labels: article, event, Screening, Theory Of Everything