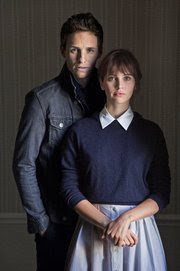 — EDDIE REDMAYNE & FELICITY JONES’ INTERVIEW via (x)
.
"Were there any moments in the filming that particularly resonated with you?
.
Redmayne: The last scene we filmed. Feliss had been a superhero the whole way through. On a normal film, it’s completely collaborative, but in this film, she had to constantly navigate around how my physical limitations affected the filming. So we got to this scene where we’re meant to be sitting in bed, and there was no dialogue on the page, and so we improvised the whole thing. There was a moment Feliss was looking at me and I said, “Thank you.” And she said, “Did you just say something?” And I go, “Thank you.” It was one of those weird moments when life and art meet.
.
Jones: We had just had a McDonald’s beforehand, a cold McDonald’s, and there was a pervading smell of filet of fish.
.

Redmayne: It did kind of kill the romance of the moment.”

New York Daily News: Physics gets physical: Eddie Redmayne, who plays Stephen Hawking in 'The Theory of Everything,' found the role grueling
The actor prepped intensely for the part in the new movie and then had a nerve-racking meeting with Hawking himself... ...The physical challenges of playing Hawking in the worst throes of his disease were formidable, and scenes of Redmayne as Hawking inching his way dowFn staircases on his back, or writhing in pain, are gripping. Yet Redmayne, who’s become a shoo-in for a Best Actor Oscar nomination for the role, says he was just as committed to embodying Hawking’s puckish spirit.
“What became absolutely clear to me through researching him is that, for Stephen, his disease is secondary,” Redmayne says. “He is truly someone who has lived passionately, and looked forward.”
That doesn’t mean that Redmayne — who trained with a dancer to get his physicality right and had to regularly visit an osteopath during filming — didn’t ache during production. “There were lots of hot baths at the end of the day!” he says.
Redmayne’s next film, “The Danish Girl,” being made by his “Les Misérables” director Tom Hooper, will find him again stepping into someone else’s shoes. Make that high heels. Redmayne will play Lili Elbe, a successful artist in Denmark in the 1920s who was one of the first men to have a sex-change operation.
“After that, I think maybe I’ll take time off from playing real people,” Redmayne laughs. “The stakes are too high. The pressure’s too much, I can’t cope! I’m going to have to go into hard-core therapy.” 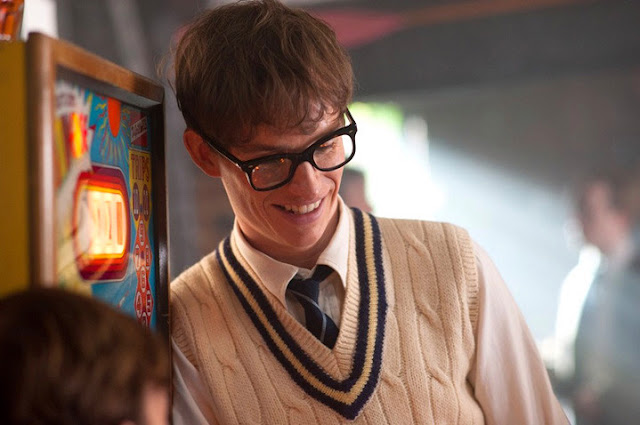 Indiewire: Explore The Science And Romance Of 'The Theory Of Everything'
with new clip, featurette and more

HISTORY VS HOLLYWOOD: THE THEORY OF EVERYTHING
Fascinating point-by-point study of the accuracy of The Theory of Everything, which, as Stephen Hawking said, seems to indicate it is “broadly true.” - via (x)
The article begins with  the comparision of the real life people (the main characters of the movie) with the actors who play them (Here I noticed a mistake. Emily Watson isn't Isobel Hawking in the movie, she plays Jane's mother Beryl Wilde according to the Focus Features official site).
In the next part the author answered many questions about Stephen Hawking and the film.

My short outline of the questions: The full answers are in the article.
At the end there are links with short description if you want to explore more about the true story. New York Post:
Stephen Hawking’s marriage captured in ‘The Theory of Everything’
Marriage ​​is hard work, goes the saying. But what about being married to one of the world’s most brilliant men — afflicted with one of the most debilitating diseases?....
...The film’s climactic scene depicting their split is widely open to interpretation, according to Redmayne. “Everyone has a different opinion,” he says. “Some people will say, ‘How could she leave him?’ But I saw it as that his life had been entirely reliant on her, and he couldn’t imagine a sense of being independent. Suddenly he had found someone who was falling for him, and reinvigorating him with a sense of pride. And I think he had also witnessed her chemistry with Jonathan when he lived with them. I feel like it was a release more than a breakup.”
The former spouses are said to be friendly today (he and Mason divorced in 2007, while Jane and Hellyer Jones are still married), and both came to watch the filming of “The Theory of Everything.”
“There was this moment,” says Jones, “where they were both on set, watching us being them when they first met. Which was very surreal.”​


The latest promos from Focus Features Email ThisBlogThis!Share to TwitterShare to FacebookShare to Pinterest
Labels: article, Hawking, interview, Theory Of Everything