Excerpts from the article Louis Wise Published: 16 November 2014 - The Sunday Times
photos by Francesco Guidicini.
Chatty yet discreet, his range second to none, Eddie Redmayne is unlike all the other British actors
who are hot and posh. His breakout film will turn Professor Stephen Hawking into a romcom hero. 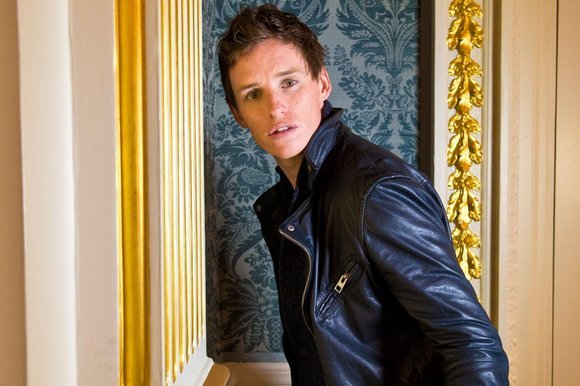 ...And, as it wades into awards contention, they couldn’t have asked for a better actor or ambassador. There are so many great young actors out there these days, you do wonder how to distinguish them, especially the nice, pretty, posh ones. Over the years, Redmayne has been lumped in with various tribes: Eton, fashion, cheekbones. But he is, as a performer, a class apart, even if something has perhaps been missing. He has had huge success on stage — from his Viola in Mark Rylance’s all-male Twelfth Night at the Globe in 2002, up to an acclaimed Richard II at the Donmar Warehouse three years ago — but the screen work has been a little patchier. And that’s a pity. Redmayne is
a true chameleon, albeit with that strong salamander face. He’s the only actor of his age who could be mooted to play both Stephen Hawking and Fifty Shades’ Christian Grey. (EL James point-blank refused, though — confirmation, as if we needed it, of her flawless taste.) Anyway, he got Hawking, and I’m sure he’d rather that. Not that he was a shoo-in.
“You know, someone asked me earlier, ‘Did you get offered it?’” And I was, like, ‘No — I fought pretty hard,’”...

...“I don’t have a massive amount of faith in myself,” he goes on, describing how he lobbied for the role,
“but I do have a competitive edge, so I was, like, ‘Yeah — yeah! I’m gonna try for that!’ And eventually
I got it, and I was, like, ‘YEAH!’” — he punches the air for that one — “and then… argh! Complete terror.”
Redmayne told the film’s director, James Marsh, that if he got the role, he’d “go about it in an old-school way”, surround himself with a team of experts in make-up, costume, props and choreography and so on. So he did...

...With hindsight, it’s the perfect breakout role for Redmayne — something classically British yet also, somehow, extreme. Here is someone, after all, who can swing from the tight-lipped machismo of Birdsong to the gay, murderous son in Savage Grace; in another forthcoming role, he will play Lili Elbe, formerly Einar Wegener, who, in the early 1930s, became one of the first people to undergo gender reassignment. See how he rose to his role in the film Les Misérables, surprising everybody with his rich tenor voice. I ask him if he’d ever do a franchise, like his mate Robert Pattinson, and he looks pained. “I think it’s really difficult to judge these things, because the thing is, 90% of actors are out of work.”... 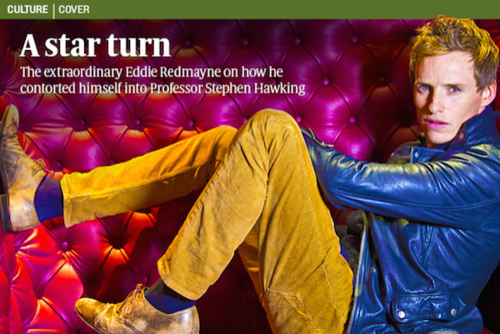 ...The inevitable uplift follows, though: “I f****** love a blockbuster!” That’s just as well, as in February he will show off a six-pack and some dodgy contacts in the Wachowskis’ latest sci-fi fantasy, Jupiter Ascending. I can’t quite summarise the plot for you — I’d have better luck with Hawking’s theories — but suffice to say that Redmayne plays a matricidal alien called Balem Abrasax. It seems he wants to do what most of his peers aim for today: construct a perfect mix of blockbuster power and art-house (and award-winning) kudos. But he does mention that the big studios have cottoned on to this tactic, with actors only taking the big roles in order to fund the little ones, and aren’t so willing to play ball any more. Reading between the lines, he may have to do a bit more modelling...

...The only time he has ever felt he needed a Twitter account was to do the notorious ice-bucket challenge that swept the internet earlier this summer. (Considering that the challenge was launched to combat motor neurone disease, it would have been pretty awful PR not to.) Anyway, he took part, but how to share with the world?
Luckily, he did it “with a pal” who had his own Twitter account. The pal — though he doesn’t mention it — is the actor Jamie Dornan —the same Jamie Dornan, incidentally, who got that Fifty Shades role. What was in it, you wonder?
A Twitter account or the fury of EL James? Both? Never mind. In the long term, Redmayne doesn’t need either.
And I think he knows that, too. Not that he’d ever say.

A BRIEF HISTORY OF THEIR TIME
Next year’s film awards are going to witness a fascinating sparring match between two well-educated British actors playing two homegrown scientific geniuses. In fact, for once, the actors are almost as well educated as the boffins. Interestingly, both actors, as a result of attending single-sex public schools, first trod the boards as women. Turing has not been so prominent a character as Hawking in plays and films, so far; Cumberbatch, though, is a readier communicator than Redmayne. An Oscar campaign might correct that imbalance. We line up the personal formulas each will bring to the battle.

Email ThisBlogThis!Share to TwitterShare to FacebookShare to Pinterest
Labels: article, Theory Of Everything