TToE promo, stills, articles - a few behind the scenes details Here are cities where The Theory of Everything will be playing from Friday. (x)
THE UNIVERSE IS EXPANDING Stills from 'The Theory of Everythimg - source: hope72 The 'Theory Of Everything' Scene That Kept Eddie Redmayne Up At Night
...Toward the end of the film, Hawking comes to America for a speech. As he's taking audience questions, a woman near the front row drops her pen. Director James Marsh then imagines a moment where Hawking -- who was diagnosed with motor neurone disease, or ALS, in 1963 -- slowly begins to rise out of his wheelchair. He walks off the stage, bends down and proceeds to hand the woman her wayward writing instrument, a simple gesture that is commonplace for so many viewers. But in a single cut, Hawking is back in his wheelchair, the dream of full body movement snapped back to his reality.

"I was so scared of it. In the script it read so beautifully," Redmayne told HuffPost Entertainment about the scene. "I had spent these months working on the physicality, but I was so scared to try that."

Redmayne actually spent six months preparing to play Hawking. He watched videos of the theoretical physicist, interviewed Hawking's family for pointers and enlisted a full team of support: Marsh, makeup artist Jan Sewell, costume designer Steven Noble and dancer Alex Reynolds, who worked on the zombie movements in "World War Z." But the dream sequence only locked into place once Redmayne realized that he could reverse his own process to its beginning.

The finished product is the film's high point. "I find it weirdly moving," Redmayne said. He wasn't the only one. "That was the thing that Lucy and Tim Hawking [Stephen's children with Jane] said to me the other day when they saw the film," Redmayne said, he voice rising with emotion. "It was extraordinary for them to see what their dad could have looked like in his 40s."... 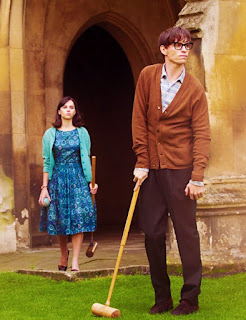 Roger Ebert:
EDDIE REDMAYNE ON PLAYING STEPHEN HAWKING IN "THE THEORY OF EVERYTHING"

When Stephen struggles through that croquet course, that must been a tough scene for you.
I’ve known Felicity for years. We’ve never worked together but we are good friends and we trust each other a lot. I had this way of working with a director called Derek Martini. I did a film with him and Chloe Moretz called Hick. He had this way of working that, once it is on the close-up, he’d have the other actor mess with you in character from behind the camera. It was the second day of shooting, that croquet scene. Basically, Felicity is someone I trust so much that while I was playing that game of croquet, she was just shouting abuse at me. Trying to get me riled. 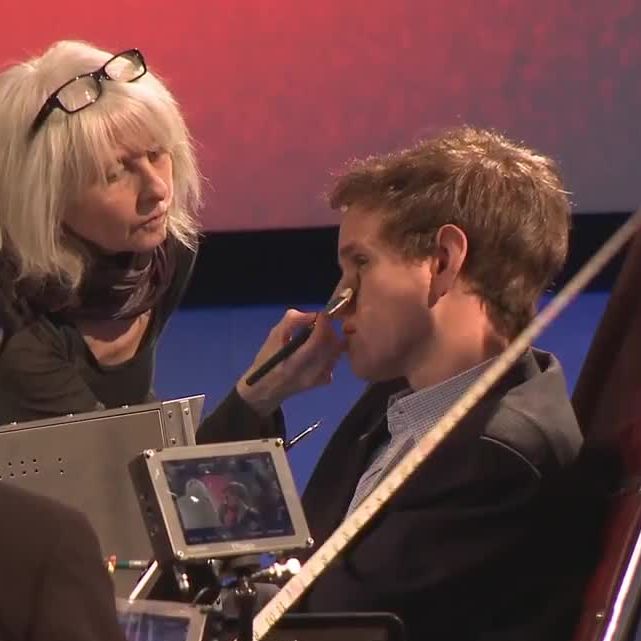 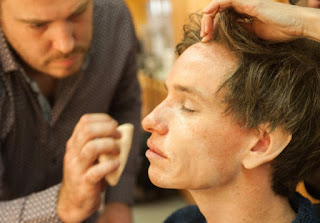 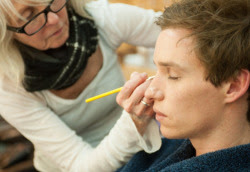 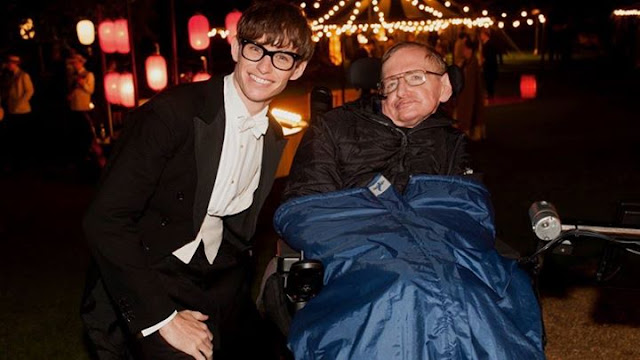 Eddie Redmayne meets Stephen Hawking on set during the filming of The Theory of Everything.(x)

hollywoodmoviecostumesandprops: movie costumes from The Theory of Everything
Posted by Jutka at 1:59 AM