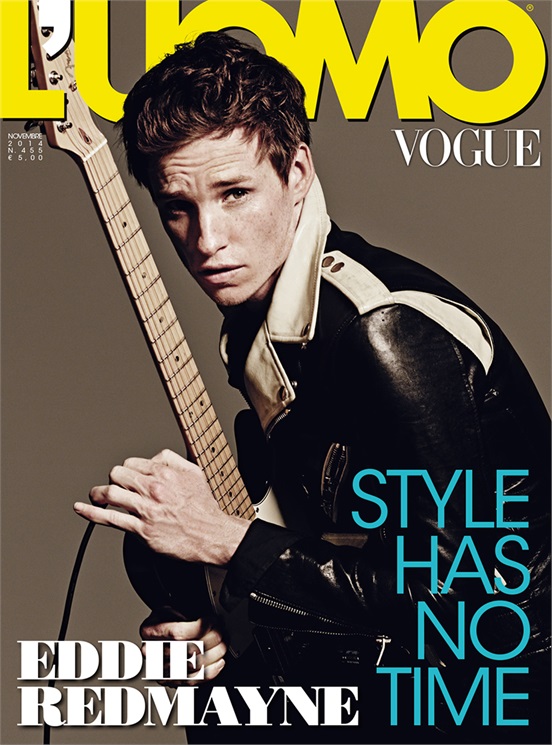 BELLISSIMO! The entire L’Uomo Vogue cover and fashion spread with Eddie Redmayne.
His fashion gurus are classy Brit Ralph Fiennes and his own dad. Source: m.vogue.it via (x) 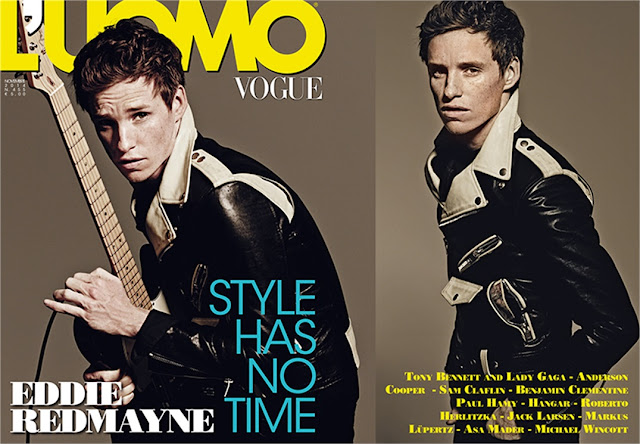 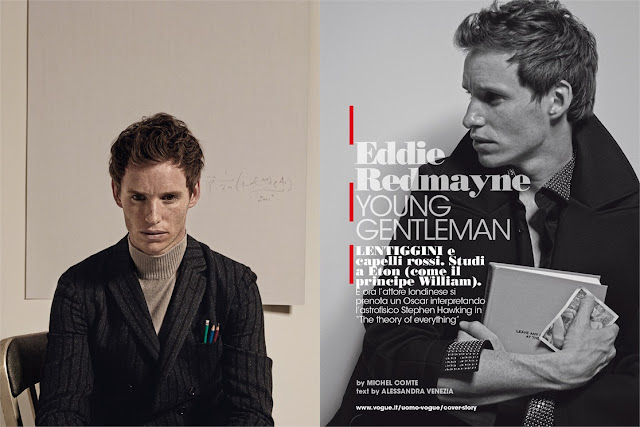 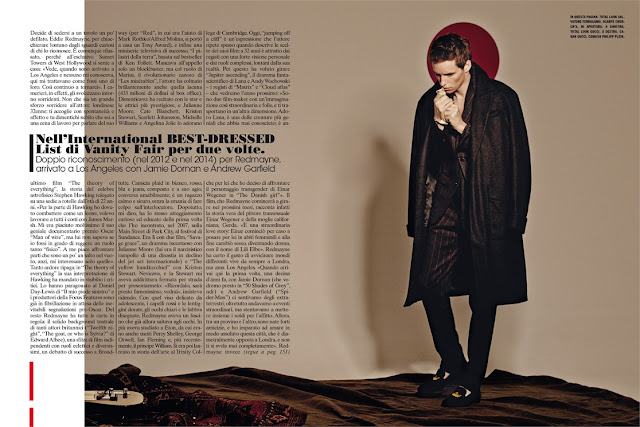 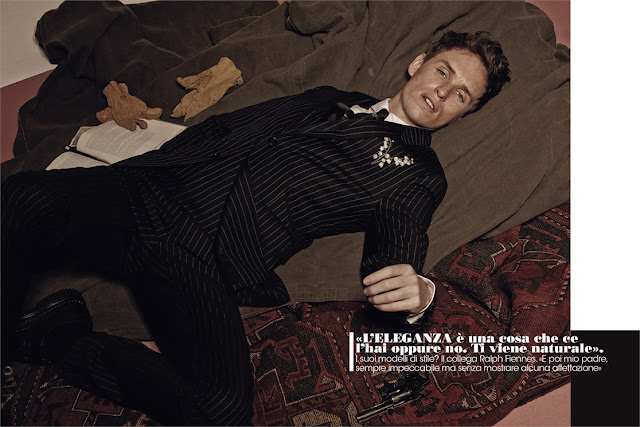 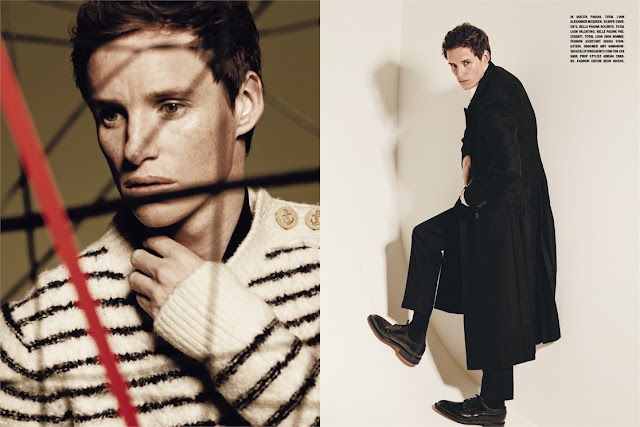 Many thanks to olly-77 for the TRANSLATION:
He chooses to sit at a slighly hidden table, Eddie Redmayne, to chat away from the curious looks of those who recognize him. He’s relaxed though, because he feels at home at the exclusive Sunset Towers in West Hollywood: “When I arrived to Los Angeles and nobody knew me, they treated me like one of them. So I keep coming back”. The waiters, in fact, flutter around him, smiling. It’s not an effort to smile at the 32 years old British actor though: he welcomes you spontaneously and lovingly and you instantly forget that you’re at a work dinner to talk about his latest film The Theory of Everything, the story of the famous astrophysicist Stephen Hawking confined on a wheelchair from the age of 22.

“I had to fight like a lion to get this role, I wanted to work with James Marsh at all costs. I really liked his Oscar-winning documentary Man on Wire, but he didn’t know if I was capable to play such a “physic” role. I like to challenge myself with roles that are like a jump off a cliff, on the contrary, I get interested only in those”.


Such bravery pays off: in The Theory of Everything his performance has made critics go into raptures. They compared him to Daniel Day Lewis in My Left Foot and Focus Features’ producers are already excited, waiting for pre-Oscar signals.


Redmayne has all what it takes after all: solid theatre backgroud typical of British actors (Twelfth Night, Edward Albee’s The Goat, or Who is Sylvia?), a lot of indie films with eclectic and different roles, a successful Broadway debut (for Red, where he played Mark Rothko/Alfred Molina’s assistant, he won a Tony Award), and finally, a successful tv miniseries, The Pillars of the Earth, based on Ken Follett’s best seller. Only a blockbuster was missing, but with the role of Marius, the revolutionary singer of Les Misérables, the actor has brilliantly filled that gap ($ 433m at the box office). Oh, I forgot: he has played with the most prestigious stars and actresses, and Julianne Moore, Cate Blanchett, Kristen Stewart, Scarlett Johansson, Michelle Williams and Angelina Jolie adore him.

Plaid shirt in white, red, blue and jeans, still and at ease, chats nicely; he’s a calm and sure boy, without the obsession of making a good impresion on the person he’s speaking to. After all, he has the same curious and polite attitude of the first time I met him, in 2007, in Main Street of Park Cirty, at Sundance Festival. He was there for two films,Savage Grace, an incestuous drama with Julianne Moore (he was the narcissistic rich boy of a declining dynasty of the international jet set) and The Yellow Handkerchief with Kristen Stewart. It was snowing and Stewart has even stopped me in the street to meet him: “Remember him, he will be very famous soon”, she insisted, smiling.

With that tender teenage face, red hair and golden freckles, fair eyes and drawn lips, Redmayne had a striking charm even at that time. Moreover, he had studied at Eton, where Percy Shelley, George Orwell, Ian Fleming and, more recently, Prince William had come out. He had then got a degree in history of art at Trinity College in Cambridge.

Today, “jumping off a cliff” is an expression the actor keeps repeating when he describes the choices concerning his films: at 32, he’s attracted by directors with a strong personal vision and by complex roles, far from his reality. That’s why he chose to play in Jupiter Ascending, Lana and Andy Wachowski’s sci-fi drama - Matrix andCloud Atlas directors – that we’ll see next year: “They’re two film-makers with an extraordinary and crazy imagination, and they lead you to another dimension. I adore Lana, she’s one of the most brilliant human beings I’ve ever known; it’s also because of her that I’ve decided to face the transgender character of Einar Wegener in The Danish Girl”. The film, that Redmayne is filming in the next months, tells the true story of the transsexual painter Einar Wegener and his Californian wife Gerda. “It’s an extraordinary love story: Einar casually began to pose for her in female clothes and finally changed sex, becoming woman, with Lili Elbe as new name”. Redmayne likes to make different worlds closer: he’s always lived in London but likes Los Angeles. “When I came here for the first time, about 10 years ago, with Jamie Dornan (we’ll see him soon in 50 Shades of Grey) and Andrew Garfield (Spider-Man) we felt like aliens; besides, we would go to extraordinary events, but found it difficult to collect money for the rent. So, between those auditions, strong friendships were born, and I learnt to love this city, that is diametrically opposite to London, and doesn’t show completely to you.

Redmayne instead talks about everything, about friendship and love, about his charity and his idea of elegance.

He describes with admiration his fiancée Hannah Bagshawe. “We’ve known each other since we were 15, and it took other 15 years to grow a different relationship: Hannah is a special woman and it’s a huge thing that she accepted to marry me”. Is marriage around the corner? “It’ll be in winter”, he answers, and smiles. He doesn’t go further. And what does elegance means to him, who has such a personal style? “You can’t make up as elegant, it’s something you were born with. Among other style masters he mentions Ralph Fiennes: he’s incredibly chic, has gait and always thinks before speaking. My role-model, anyway, is my father: immaculate without affectation, and with a natural style. Speaking of female world, he finds elegant Kristin Scott Thomas, Marion Cotillard, his mother and his fiancée Hannah. Two hours have already passed: after eating with appetite tartar and chicken, Eddie accompanies me towards the car and is about to greet me, when a blonde lady stops him to congratulate. She had seen him in Broadway in Red: “Please, come back to the stage, you’re amazing”. He says thank you, vaguely embarrassed, and then looks furtively at me, holding a book in his hand. “But now I’ll go in my bedroom to read…”. A particular: the bill has magically disappeared from the table. In many years of interviews, I think, Redmayne is only the second actor that offers me dinner; the first has been Diane Keaton, many many years ago. When you talk about style…