This month starts filming The Theory of Everything starring Eddie Redmayn. Here are some excerpts from interesting articles about this biopic and the documentary about Hawking. I'm interested in the documentary too, because I can find out more about the man whom Eddie will play. 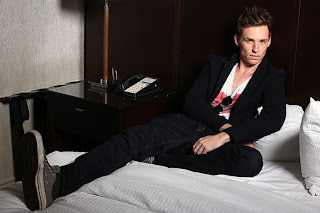 Redmayne, who won a Tony Award for his performance in the dramatic play Red, can do so much more than belt out "A Heart Full of Love." Throughout his career, he has proven his ability to take on many diverse roles, from noblemen in period pieces like Elizabeth: The Golden Age and The Other Boleyn Girl, to an idealistic film student in My Week with Marilyn, to a nerdy Southern outcast traveling across Louisiana in The Yellow Handkerchief. Theory of Everything is still very much in the development stage, but we're excited to see what Eddie Redmayne brings to this iconic role. The actor has big shoes to fill, but if his past work is any indication, he's up for it. Also, since we're talking academics. What is biopic + character with disability? Serious Oscar potential.   (full article)
Theory of Everything isn't the only Hawking movie in the works - a U.S. TV documentary entitled A Brief History of Mine is due to air on the PBS network later this year (13). It will feature commentary about the physicist's life from his famous pals, including actors Jim Carrey and Benedict Cumberbatch and entrepreneur Sir Richard Branson. (source) 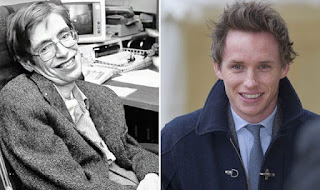 ...Jane Hawking described her early days of the marriage, her role as Hawking’s caregiver, and their parting in her 1999 memoir “Music to Move the Stars,” much criticized for its candor about Hawking’s ego.
Since the publication of this interview with her in The Guardian, which coincided with the BBC film, Hawking’s controversial marriage to one of his nurses, the former Elaine Mason, also ended in divorce amid allegations that she had abused him.
Jane, a linguist and Spanish poetry scholar, has since married the composer and choirmaster Jonathan Hellyer Jones. She and Hawking have resumed a friendly relationship. She visits with him and has written a second memoir, “Traveling to Infinity: My Life With Stephen.”... (FULL ARTICLE) 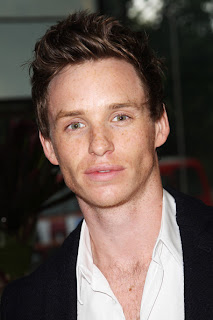 Eddie Redmayne is set to play Stephen Hawking in Theory of Everything directed by James Marsh.
The world famous physicist was diagnosed, aged 21, with motor neuron disease. The illness, progressively worsening since Hawking's diagnosis in 1962, has confined Hawking to a wheelchair. He is unable to speak without a voice simulator. Despite all the difficulties Hawking faces he continues to teach at the University of Cambridge. This will be the first feature film about Hawking's life, which has previously been dramatized in the 2004 BBC film Hawking, starring Benedict Cumberbatch. Similarly to the 2004 adaptation, the film will concentrate on Hawking's personal life including the difficulties caused by his illness.
Considering the obstacles Hawking has had to overcome, he has led a truly remarkable life. (FULL ARTICLE)

Discover the Extraordinary Life of Stephen Hawking in 'Hawking' - contactmusic 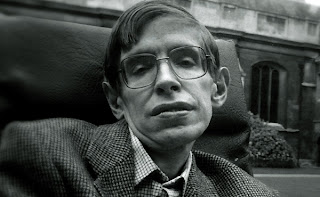 „Hawking's life is there for all to see in the upcoming documentary.
Hawking tells the story of the remarkable man and his remarkable life.
A large part of the documentary covers Hawking’s life with Jane Hawking – the woman that helped him through a serious bout of pneumonia in 1985, refusing to take him off life support. The pair divorced after 26 years of marriage, leading Jane to write her own book: ‘Travelling to Infinity: My Life with Stephen’.” (FULL ARTICLE) 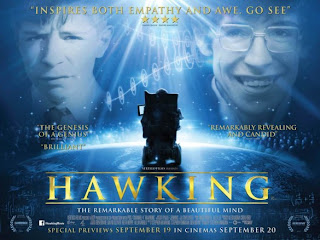 This competition is for UK residents only

On the 19 September Hawking himself will be taking part in a live Q&A after the Cambridge Film Festival premiere which will be beamed live to cinemas across the UK.

'Hawking' is the new documentary based on the scientist's colourful life and includes interviews with the likes of his former wife, Benedict Cumberbatch who portrayed him in the biopic movie, Virgin entrepreneur Richard Branson and comedian Jim Carrey. It has been directed by Stephen Finnigan ('I Shouldn't Be Alive', 'The Great Russian Art Boom') and narrated by Hawking himself, and it's set to be released on September 20th 2013.

Hawking Exhibits a Painstakingly Three-Dimensional View of the Genius Physicist's Life
Director Stephen Finnigan, allowed unprecedented access to Hawking's personal life, interviews his nurses, family, and the former doctoral students whose unusual working arrangements included bathing and feeding their mentor. But Finnigan wisely seizes on the gentle strength and charisma of Hawking's first wife, Jane Wilde. She imprints on the film as fully as her former husband, whose presence is still considerable. Jane's voice, demeanor, and often-painful reminiscences lend an emotional counterweight to the multitude of voices reminding us that Hawking is one of our great discoverers, on an intellectual plane with Galileo and Einstein. (FULL ARTICLE)

Email ThisBlogThis!Share to TwitterShare to FacebookShare to Pinterest
Labels: article, Hawking, news, Theory Of Everything