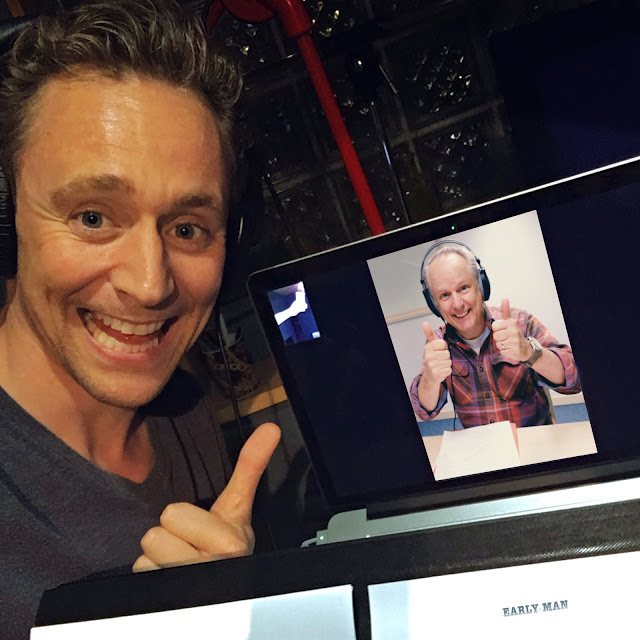 twhiddleston: Been working with the great Nick Park and Aardman on their hilarious new film,
@earlymanmovie. He is absolutely as brilliant as you might expect. Sometimes he makes me laugh
so much I have to leave the sound studio for five minutes and calm down and have another go.

Tom Hiddleston has now joined the cast of the prehistoric comedy adventure Early Man, accompanying Eddie Redmayne, who was announced in May. In an announcement made Thursday by StudioCanal and Aardman, The Night Manager star is set to voice the "ridiculously pompous" Lord Nooth, governor of the Bronze Age town, who is a money-loving tyrant and rival to the film’s Stone Age hero, Dug (Redmayne)
"Tom is a wonderful actor and it’s so thrilling to see him bring our comic villain to life with his amazing talent, energy and enthusiasm," said Park, who returns to the director's chair for the first time since his Oscar-winning 2005 hit Wallace and Gromit: The Curse of the Were-Rabbit. "It is a great privilege to work with Tom and I’m so excited to see his character Lord Nooth emerge on screen!” ...

“I have been a fan of Nick Park and Aardman for as long as I can remember, and am incredibly honored to be working with Nick and the team on this adventure," said Hiddleston. "I’m thrilled to be able to breathe some semblance of life into this hysterical villain and to work with Eddie for the first time. Early Man made me laugh out loud when I read it. Lord Nooth is larger than life in every respect. I can’t wait for audiences to meet him."...

...Speaking to The Hollywood Reporter, Aardman's Peter Lord and David Sproxton said
that the world that Park had created for Early Man would lend itself to a sequel. (THR)
Early Man is currently filming in Bristol, England, and will be distributed by StudioCanal
in the U.K, France, Germany, Australia, and New Zealand in 2018. (EW)