"I loved magic when I was a kid"
Guaranteed, that the Oscar winner Eddie Redmayne has no need for introduction, and with his next film
he will charm the Harry Potter generation completely. The actor gave an exclusive interview to our editor. 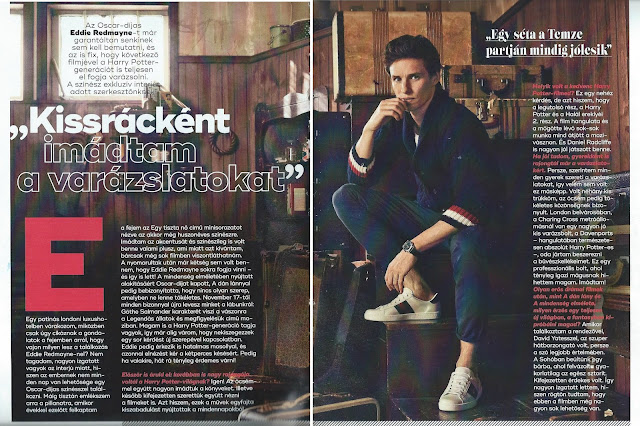 I was waiting in an elegant luxury hotel, while my thoughts were racing in my mind about what will it be like to meet Eddie Redmayne. I don't deny, I'm very excited about the interview, because you cannot  meet an Oscar-winner actor every day. I still remember the moment, when I noticed the then twenty-something actor in the Tess of the D'Urbervilles miniseries. I loved his accent and he had something plus as an actor as well and I wanted to see him again in more films. After Les Miserables I had no doubt he will be very successful - and he has. He won the Oscar for The Theory of Everything, and with The Danish Girl he proved, that there's no such role he's not perfect in. Surely he will blew our mind again from 17th November: he brings Newt Scamander to the big screen in Fantastic Beasts and Where to Find Them. I'm also a member of the Harry Potter generation, so I can't wait to ask him a series of questions about his new role.
And Eddie arrives with a big smile on his face, he apologises for being two-minute late, though he's really someone who's worth waiting for,

JOY: First, tell me please: were you a big fan of the Harry Potter world earlier too?
Eddie Redmayne: Yes! Me and my younger brother really loved the books, and later we particularly loved to watch the movies together too.

JOY: What was your favorite Harry Potter film?
E.R.: It's a difficult question, but I think the last one, Harry Potter and the Deathly Hollows Part 2. The film's mood and the huge amount of work was palpable on the big screen, and Daniel Radcliffe was also very good in it.
JOY: If I know right, you were the fan of magic already as a child.
E.R.: Of course, I think every child loves magic, this was the same with me. I had a few little tricks and my little brother proved to be a perfect audience. There's a very good little magic shop in central London, at the Charing Cross metro station, the Davenports - it's atmosphere is absolutely Harry Potter like - I went there to purchase my magic props. This is a professional shop, I could feel I'm a real wizard, I loved it!
JOY: After such strong films like The Danish Girl and The Theory of Everything, what it feels like to prove yourself in fantasy, a completely different world?
E.R.: Meeting David Yates, the director was super chilling, in the best sense of the term of course. We got into a bar in Soho, where he practically outlined the whole story. It was particularly interesting, so
I became very excited, because I knew immadiately, that this film had many opportunities.

JOY: And what was it like to work with Colin Farrell?
E.R.: Amazing! He's a great actor. When we went to Comic-Con (San Diego Comic-Con International is a multi-genre entertainment and comic convention) to promote the film, he also was a great help to me. There was a huge crowd waiting for us, and we should have to go on stage. I became very nervous and just wanted to go home. (laugh) Then Colin stood behind me and he started to massage my shoulders, like a boxer before the match, and he said: go for it, you can do it!
JOY: What was your worst fan experience so far?
E.R.: We were in the middle of nowhere in Florence one minute after I proposed to my wife, and then two tourists appeared and they said:"Oh My God! Can we take a selfie?" And I just thought to myself, please, not now, this is
the big moment of my life. So somewhere there's a selfie taken moments after our engagement. (laugh)
(My post about the engagement weekend - I wonder if Eddie talked about the first pic?) 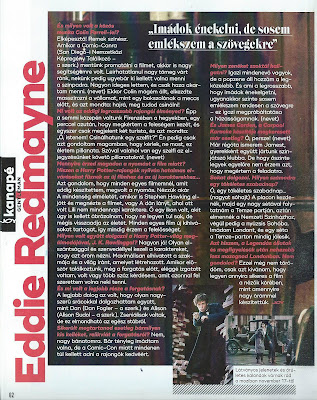 JOY: How much pressure do you feel because of the film? Obviously the Harry Potter fans have huge expectations for the film and characters...
E.R.: I felt the pressure of each movie I made so far. Let's see
The Theory of Everything, when Stephen Hawking came to see the film, or The Danish Girl, where Lily had an extraordinary character. She was an icon. I had to portray her a way that is not too much, yet depicts her life. Every film is challenging, so I always feel the responsibility.
JOY: What was it like to work with the creator of the Harry Potter World, J. K. Rowling?
E.R.: Very good! She treats the characters with such determination and passion, it's fun to watch. She's completely dedicated to her job and to the world she created. When we first met, before we started filming, I was very excited, I had hundreds of questions, and I wanted to ask her right away.
JOY: And what was the best part of the filming?
E.R.: The best part was, that I could work with such great guys like Dan (Dan Fogler) and Alison (Alison Sudol) They were genius, but we can say this about the whole crew.

JOY: Could you keep any little props, relics from the set?
E.R.: Sadly, no. Though I would have loved to, but due to Comic-Con we had to give everything for the sake
of the fans.
JOY: What music do you listen to?
E.R.: I'm a true omnivore, but pop music is closest to my heart. And worst of all, I love to sing, but hardly ever remember the lyrics properly - this is a real ordeal of my marriage. (laugh)
JOY: And James corden, the creator of Carpool Karaoke have contacted you already?
E.R.: Oh, of course! (laugh) I know James for a long time. As adolescents we went to stage school together.
But to be honest, I don't feel ready for the task.
JOY: You work a lot. What is the perfect day off for you?
E.R.: Oh, a perfect day off... (big sigh) I start it on the market, then I would go for a big walk along the Thames,
then I'd go to the National Theatre and finnaly to the teeming Soho. I love London, and a walk on the banks of theThames always feels good.
JOY: I think after Fantastic Beasts and Where to Find Them it will be harder for you to move around London.
Don't you agree?
E.R.: I don't care about this just now, I only wish the film to be successful, as much as it was a great pleasure
to make it.

Spectacular scenes and crazy adventures are waiting for you at the cinema from 17th November. (x)

ES: Watch Fantastic Beasts and Where to Find Them live stream Q&A