Warner Bros. released the first three official television spots for their upcoming release of Fantastic
Beasts and Where to Find Them, out this November 18, 2016 in regular theaters and IMAX
worldwide. The first trailer spots are fairly similar, but the third one brings about the darker themes
of war and chaos looming through New York City. (x)

'Fantastic Beasts and Where to Find Them's red carpet world premiere
set to take place on November 10, 2016 in NYC
(via snitchseeker.com -  Not yet confirmed!)

Visit https://t.co/2JUc7mI5Ng & enter for a chance to win a trip to the World Premiere of @FantasticBeasts in NYC! pic.twitter.com/SJzXAfob2c
— Sun Insider (@SunInsider) October 7, 2016

A sweepstakes website is reporting that the red carpet world premiere of Fantastic Beasts and Where to Find Them is set to take place in New York City on Thursday, November 10, 2016 at the Alice Tully Hall at Lincoln Center (also the location of the Harry Potter and the Deathly Hallows: Part 1 U.S. premiere).
Quote: Prize winner (“Winner”) will receive an overnight trip for two to New York City. Two people will leave
by train and stay overnight in a New York Hotel (TBD by studio) Winner will also receive tickets for two to the
New York Premiere the night of November 10th at Alice Tully Hall at Lincoln Center.

While this has not been confirmed by Warner Bros., it does tie in with the timeline of other promotional events
taking place for Fantastic Beasts, including the
NYC Lumos gala screening of the movie on Saturday, November 12th at Carnegie Hall
(with J.K. Rowling and Eddie Redmayne in attendance), and the
London European premiere on Tuesday, November 15, 2016
The entire cast of the film series, filmmakers, and J.K. Rowling are all expected
to attend the world premiere. (Source)

screenshots from the final trailer 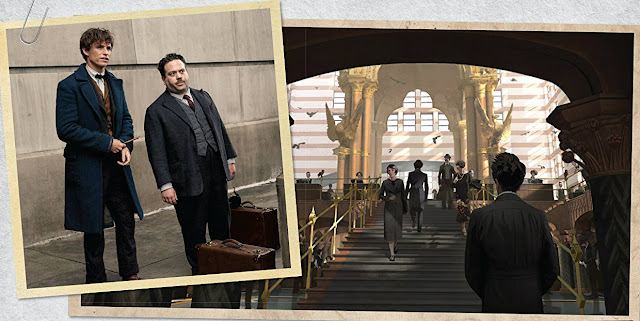 Pic from the 'Fantastic Beasts and Where to Find Them: Newt Scamander: A Movie Scrapbook'
November 18, 2016 - You can preorder on Amazon here