The Telegraph: The Theory of Everything: James Marsh and Eddie Redmayne on bringing Stephen Hawking to the big screen
Eddie Redmayne and Felicity Jones are Golden Globe nominated for their performances as Stephen and Jane Hawking in James Marsh's hugely anitcipated new film ...‘Getting Stephen’s changing physicality right was very hard,’ Redmayne, 32, recalls. ‘But managing the fear and responsibility of playing him and doing justice to him was tough too.’... ...Redmayne recognised Marsh’s documentary roots in the way he directed his actors. ‘To convey time passing, he’d shoot 10 or 15 minutes of documentary-style footage, with Felicity and me improvising. That idea of trying to capture the minutiae of those lives was important. So he would allow us the freedom to play. Yet his documentary background also meant he has a forensic eye for detail. He’d see what my hand was doing, what my feet were doing, and capture that.’ ...Casting had been crucial – playing Hawking credibly would be a test beyond most actors. Redmayne was already highly regarded by Working Title, for which he had received good notices in Les Misérables. Marsh says now, ‘I wanted Eddie on the shortlist, and once I met him I knew I wanted him to do it. There was something about the way he talked about it, something in his eyes. He understood what it was going to take in terms of preparation. By the end of the first day’s shooting I knew it was going to work. On that day Eddie did three versions of Stephen – as an able-bodied student, walking on two sticks and lastly in a wheelchair. And day two was the May Ball, a huge expensive set piece, the biggest in the film.’
‘That first day was trial by fire,’ Redmayne says. ‘It was terrifying, but at the end of the day I’d learnt that James had faith in me, even when I didn’t have faith in myself.’
Felicity Jones was widely praised last year for her portrayal of Charles Dickens’s mistress, Nelly Ternan, in The Invisible Woman, but Marsh had already been impressed by her in the college-student romance Like Crazy (2011).
‘Both Felicity and Eddie have a slight resemblance to their characters in their young years,’ Marsh says. ‘I had them read [the script] together, and it went so well it was very reassuring.’
Redmayne has said he could not have played the role of Hawking without Jones’s support. ‘She had to do so much of the heavy lifting. The nuance and subtlety in her work is quite extraordinary.’... 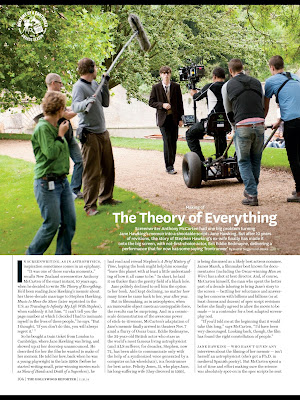 You can read the article here:
How 'Theory of Everything' Screenwriter (Finally) Convinced Stephen Hawking's Ex-Wife to Let Him Adapt Her Memoir

Excerpt from the article:
...That left only one last challenge: finding the right actors to play Stephen and Jane. Redmayne, it turns out, was not Working Title's first choice. They didn't think the little-known star (whose biggest credit was Les Miserables) would be the right fit to play the greatest scientific mega-genius since Albert Einstein. But then, remembers Fellner, Redmayne's agent at CAA, Josh Lieberman, called and "beat me into submission." Fellner had Marsh give Redmayne a call to get his opinion of the actor, and that sealed the deal. "I think we bonded over our fear, really," says Redmayne of their conversation. "We realized that we were going to be jumping off a cliff and would quite like to do it together."
For Redmayne, that cliff dive involved not just his character's 30 years of aging through the film but also the withering of his body and posture as Stephen's disease took its course (production designer John Paul Kelly helped by building bigger and bigger wheelchairs so that the 5-foot-11 actor would appear to shrink in them). He worked with a dance instructor to teach him how to replicate ("inhabit" is the word Redmayne prefers) Hawking's movements. "I'd spend weeks in front of the mirror — hoping nobody was behind me — trying to isolate muscles that I hadn't used before," he says. Felicity Jones had it slightly easier, though Redmayne did throw her some curves during her audition. Instead of reading his own dialogue, he fed his character's words into the voice notes app on his smartphone and answered Jones' lines with his phone's synthesized voice. "All of Stephen's communication is what he can do facially, the specifics of the words he chooses and when he presses play," explains Redmayne.... 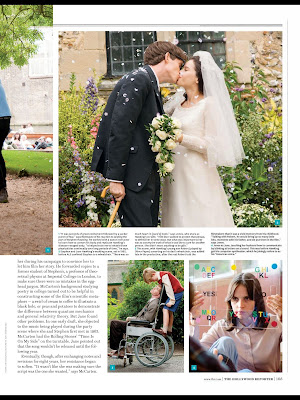 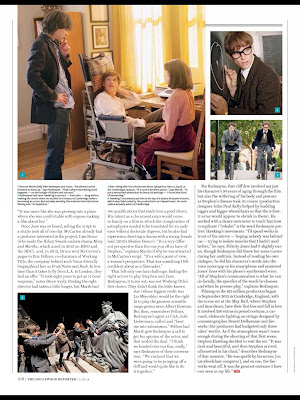 Email ThisBlogThis!Share to TwitterShare to FacebookShare to Pinterest
Labels: article, Theory Of Everything