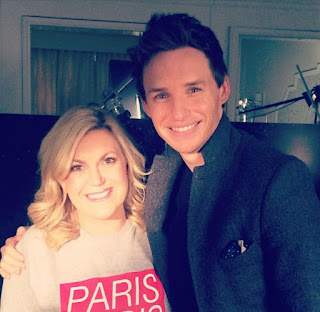 ...Eddie Redmayne told Leanne Bayley all about wooing the director James Marsh over four or five beers at the pub, about how terrified he was for Stephen Hawking to see the finished movie. He also said that if he wins an Oscar, he won't get up on stage and sing, BUT he did admit that he would "probably" fall over like Jennifer Lawrence because, well, he's a bit "shambolic". His words not ours....
Q: You've been friends with Felicity Jones for a long time, do you think that your friendship helped with the love story of Stephen and Jane?
A: I do, yeah. I've known Felicity for like 10 years and she is the most brilliant [actress]. And I've always wanted to work with her, and what was great about this is Jane and Stephen's relationship is pretty intense and complicated and having a friend playing opposite you meant that we could just jump in and start working together and challenging each other and so it was great.

Q: We don't want to jinx anything but there's major Oscars buzz about this movie. So if you won - hypothetically speaking - do you think you would be more likely to fall over like Jennifer Lawrence, forget to thank someone really special, or break into song?
A: Break into song! Oh my god, can you imagine someone getting up and then breaking into song? Probably both of
the first two combined, I'm a bit shambolic and quite forgetful so probably all the above.... 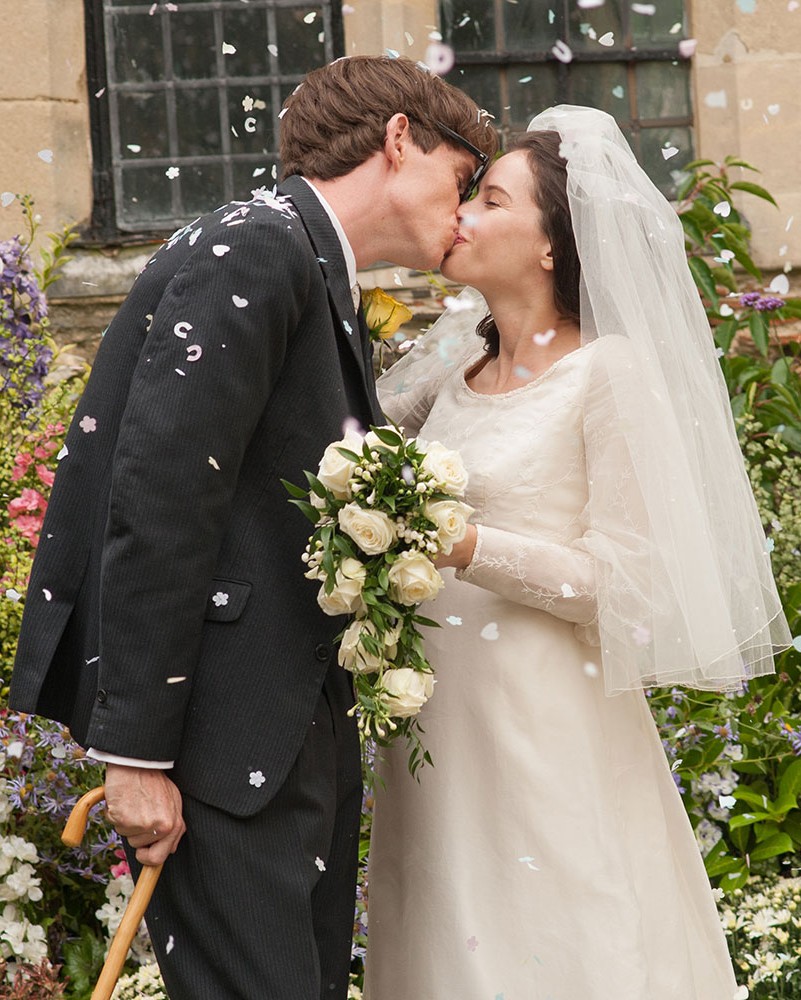 ...“We became really affectionate on set about Jane and Stephen – they’re such extraordinary people,” she explains. “We wanted to be sensitive towards their situation and their openness allowed us to explore the way we find humour and lightness in these difficult times.”

One of the film’s major successes is the on-screen chemistry between Redmayne and Jones, with both totally inhabiting their roles. Jones explains that it was their similar way of working which made the partnership such a success.

“We’ve grown up together in many ways,” she says. “We’ve both been acting for a very long time and have seen each other’s work and have a huge respect for each other. We both worked in the theatre at the Donmar Warehouse with Michael Grandage; he’s been a mentor to both of us. So we use a lot of the practices we learnt in the theatre and brought them to this film. We were always trying to get below the surface. We were constantly pushing each other – we cared so much about each other’s performances.”...

ELLE UK: 5 Minutes With Felicity Jones In The Theory Of Everything 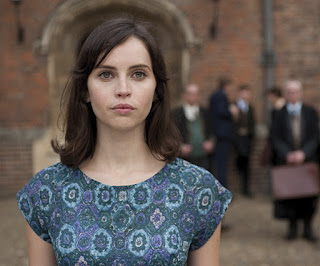 Felicity Jones: When portraying real people, you don’t finish work then go to the pub and not think about it. You take it with you. Eddie and I became so passionate about Jane and Stephen, we had lots of discussions – even arguments! It was an intense experience, but so rewarding because it felt like a very special story to be telling.
ELLE: Had you worked with Eddie before?
Felicity Jones: We both worked with Michael Grandage at The Donmar Warehouse, so a lot of the practices we'd had in the theatre, we brought to making the film. When it came to filming together, we tried things out and made lots of mistakes before it
felt right. 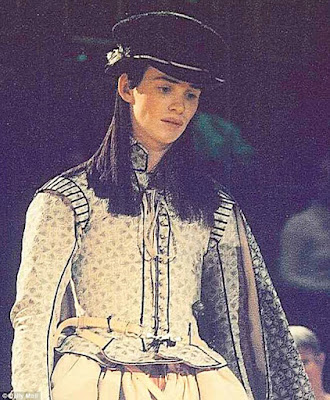 ...With a full head of ringlets, a dash of period-appropriate make-up and a darling hat, it has to be admitted that Eddie Redmayne makes an adorable young woman.
Indeed, the actor — strongly tipped for an Oscar next year for his performance as physicist Stephen Hawking in The Theory Of Everything — spent much of his teens in female roles. He explains that as a pupil at all-boys’ school Eton, it was necessary for some boys to take the female roles in drama productions.
And it is no surprise to learn that Eddie — full-lipped, with high cheekbones, delicate features and a stardust sprinkling of freckles — was often chosen to trip prettily across the gender divide.
Photos of him playing Viola in Shakespeare’s Twelfth Night — a girl dressed as a boy, played by a boy actor in the Bard’s day — show he is undeniably beautiful.
Indeed, one national newspaper critic who reviewed the production gushed that Redmayne was ‘scandalously persuasive as Viola’ in this all-male production and ‘would bring out the bisexual in any man’.
Equally floridly, the play’s director, Tim Carroll, observed that the young actor was ‘quite troublingly beautiful’.
As luck would have it, this cross-dressing performance was Redmayne’s big break....

...An inspirational drama teacher was also a huge influence. Simon Dormandy, known as ‘Dormo’ to the boys, chose Redmayne for a leading role in his first school production — a version of E. M. Forster’s A Passage To India. Next, he played Henry VI.
Dormandy recalled: ‘I knew as soon as I met [Eddie] that he was exceptionally gifted. He was able and happy to be very raw. That remains part of the essence of why he’s such an extraordinary actor.’
After school, and that key turn as Viola, the roles and praise kept on coming. Michael Grandage, former artistic director of the Donmar Warehouse, London, says: ‘Eddie finds an honesty and purity in the moment.’... 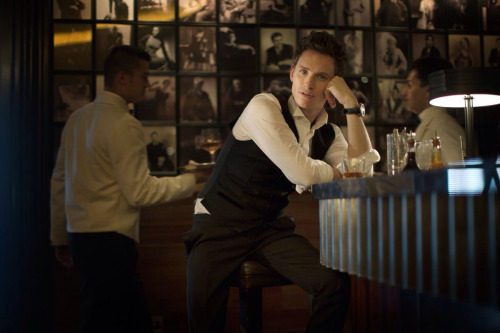 They’re blue, right?” Mr Eddie Redmayne is staring down at his shoes, a pair of velvet low-top sneakers from Tom Ford. Lovely things, but even in the gloomy half-light of a back room in a Soho members’ club, it’s plain to see that they’re not blue at all; they’re black. “Oh,” he says, shifting his glance to the knee of his corduroy trousers instead. “What about these, then?” They are also clearly black. “Right. And the sweater?” Bottle green. “Christ,” he mutters.
“I could have sworn this whole outfit was blue.” If you haven’t guessed already, behind those greyish-green eyes,
Mr Redmayne is quite colour-blind.... 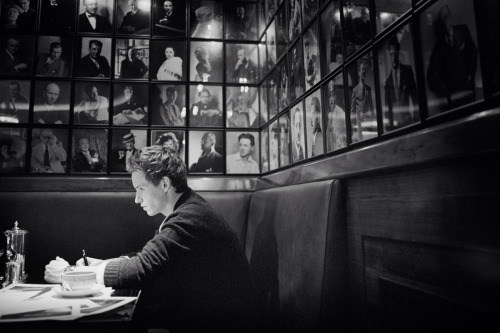 (x)
...When we first met Mr Redmayne ... he claimed that the intensity of filming was such that he hadn’t worked since.
“I’d just finished filming Jupiter Ascending with the Wachowskis, which involved eating a lot of chicken and doing lots of press-ups. I lost all that weight for Theory,” he said. “After inhabiting so many different personas, both mentally and physically, I suppose I needed to take some time off to just remember who I am – what my body’s natural state is.”
As it turns out, though, Mr Redmayne has been working. He spent part of this summer returning to his origins as an art historian, presenting a documentary on the art of WWI....read more 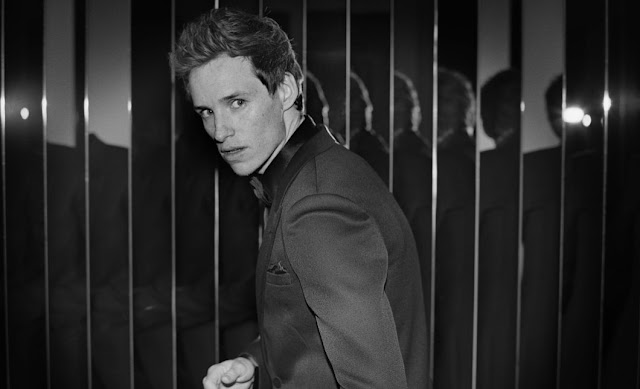 Grazia Daily:
In Bed With Eddie Redmayne! Actor Talks Oscar Buzz With Mr Porter
Alas you can't actually climb into bed with Eddie Redmayne but there is not denying that he is quite the hot piece at the moment, both physically but also in an awards season sense. The actor, with arguably the greatest cheekbones in the entire British Isles, is gaining much Oscar buzz for his portrayal of Stephen Hawking in The Theory Of Everything. But, as the MR Porter Journal found out, the gracious actor isn’t taking the hype too seriously, 'please don’t get me wrong, it’s a wonderful compliment… I just hope it serves to get the story out to more people…' ERRR could Eddie get any cuter?... 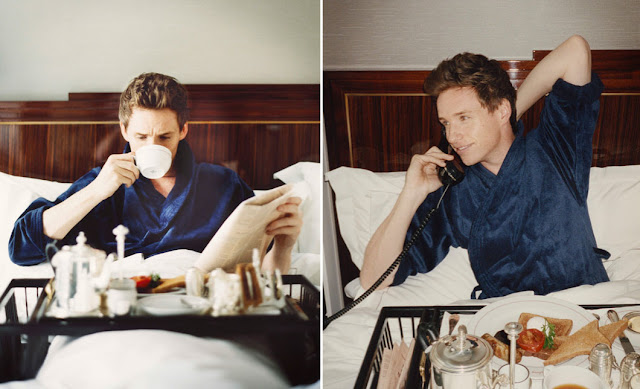 ...The Mr. Porter Journal doesn’t just stop with an interview, with the acting world’s piece of the moment on hand the natural thing to do is to put him in the pieces of the moment for an accompanying shoot. We’re talking lux tuxes and even a robe, which is unintentionally seductive. He is in a robe. On a telephone. In bed. With breakfast.
Let’s just say we want to eat Eddie for breakfast after seeing this shoot. Side of sausage anyone?...

Email ThisBlogThis!Share to TwitterShare to FacebookShare to Pinterest
Labels: article, Felicity Jones, Theory Of Everything