EXAMINER: SAG Awards® nominations were announced yesterday and, as expected, Eddie Redmayne is among the nominees for Outstanding Performance by a Male Actor in a Leading Role for his performance as Stephen Hawking in "The Theory of Everything”...(x)

Joining her co-star Eddie Redmayne with a SAG Awards® nomination is Felicity Jones as a nominee for Outstanding Performance by a Female Actor in a Leading Role, Motion Picture, for her performance as Jane Hawking in “The Theory of Everything”...(x)

The cast of the film is also nominated in the cathegory: Outstanding Performance by the Cast in a Motion Picture
The 21st Annual Screen Actors Guild Awards will be simulcast live on TNT and TBS on Sunday, Jan. 25, 2015
at 8 p.m. (ET) / 5 p.m. (PT) 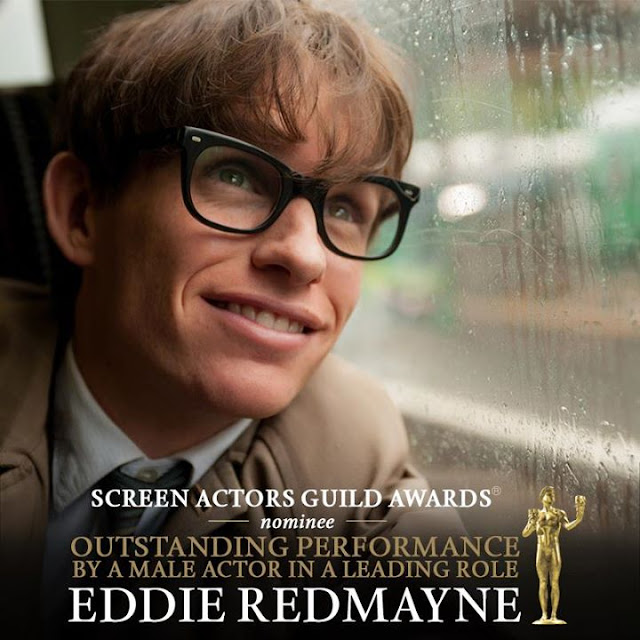 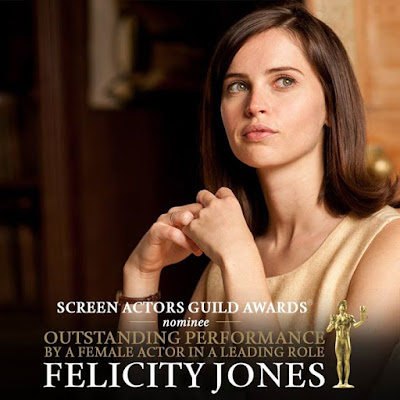 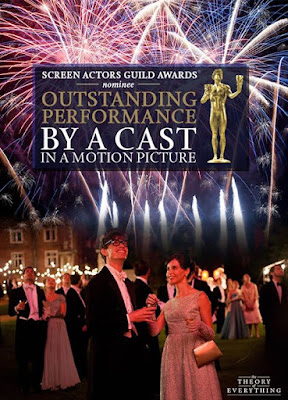 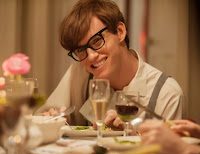 Outstanding Performance by a Male Actor in a Leading Role
Eddie Redmayne, “The Theory of Everything”
“To be nominated by my peers, and to be included in a list that
is comprised of so many actors I admire, is an incredible honor.
And to be recognized alongside Felicity and my castmates means
the world. Huge, huge thanks to SAG-AFTRA;
I am beyond grateful.” 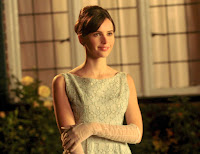 Outstanding Performance by a Female Actor in a Leading Role
Felicity Jones, “The Theory of Everything”
"Thank you to SAG-AFTRA for this very special nomination;
it's an honor to have such recognition from one's fellow actors.
I feel privileged to be a part of Jane and Stephen Hawking's
unique story, and it is really wonderful to be enjoying this moment
with Eddie Redmayne and the rest of the phenomenal cast."

ET CANADA: Eddie Redmayne's Advice To Ansel Elgort
...The Fault in Our Stars actor spoke with us after the nominations and explained why he was so excited for Eddie Redmayne to receive the honour: "I have always admired Eddie Redmayne I saw him in Red on Broadway. I think that was one of the first things he did. It was him and Alfred Molina, he was incredible in that. I saw that when I was about 15 or 16 and I love it and I looked up to him a lot."
And just like a regular fan Ansel actually waited for the star outside to get some advice!
"I spoke to him at the stage door and I said hey man I loved you in this and I want to be an actor and he said 'Oh ya? Keep working hard.' So, ya I really like Eddie Redmayne. I hope that I see him and say 'Hi' to him and I'll say you defiantly don't remember I said 'Hi' to you once when I was 16... because I thought he was incredible in that and it's nice that he got nominated for The Theory of Everything."
Two years after Ansel was starring in his first film Carrie - so all you fans out there... you might want to give Eddie a big "Thank You!" for speaking with the young star and cheering him on....

Did you hear the clapping when Eddie's name announced in the last video? (Male actor noms from 6:17) 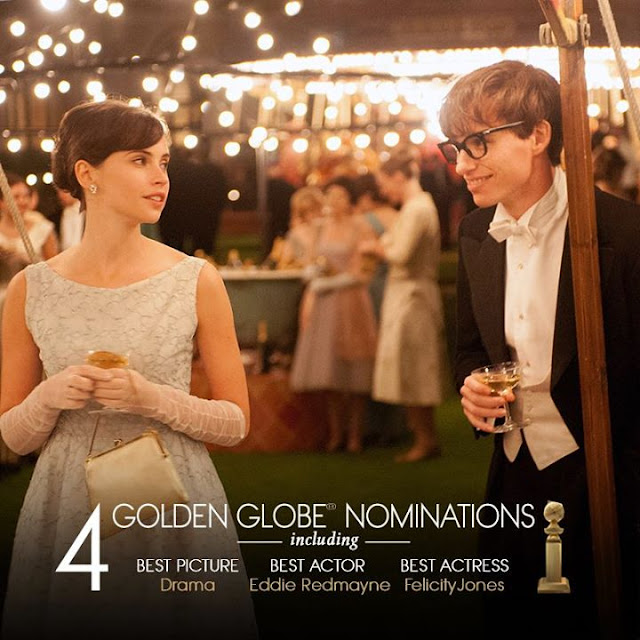 (x)
Congratulations to the cast and crew of The Theory of Everything on 4 Golden Globe nominations!
Working Title


The actor calls in to TODAY to talk about receiving a Golden Globe nomination for his
portrayal of physicist Stephen Hawking in the biopic “The Theory of Everything.”
Video on NBCNews.com

Entertainment Weekly: Golden Globe 2015 nominations: Reese Witherspoon, Emma Stone, more nominees react
Eddie Redmayne, (Best Performance by an Actor in a Motion Picture, Drama, The Theory of Everything): “I was in the middle of attempting to do all my holiday shopping in a day when I got the call. I am beyond thrilled to be nominated alongside such a stunning quartet of actors. The fact that Felicity, Jóhann, and the film are nominated means the world. I am hugely grateful to the HFPA – and to Professor Stephen Hawking for his personal support in helping me to share his story with the world.”

Felicity Jones (Best Actress, Drama, The Theory of Everything): “I’m overjoyed to hear this news! It’s a tremendous feeling to receive recognition for this film amongst a list of so many wonderful actors- an absolute privilege. The greatest thanks to the HFPA, and to Jane Hawking for entrusting me with performing her moving and inspirational life story.”

Eric Fellner (Producer): “We’re grateful to the HFPA for recognizing the fantastic work of the whole team behind The Theory of Everything with these four nominations. This film reflects the extraordinary lives of Stephen and Jane Hawking, and tells their personal story in a way audiences have never seen before. We’re delighted that Eddie’s astonishing performance as Stephen and Felicity’s as Jane have received the recognition we feel they so richly deserve, and we congratulate them and everyone who worked so hard on this film.” (x)