The premiere of the play "Little Black Book" (A very French love story from writer Jean-Claude Carriere) was last week and Eddie went to see it. In the promotional video of the play (published yesterday) he and some other actors from the audience tell us in a brief interview, what they think about the play. 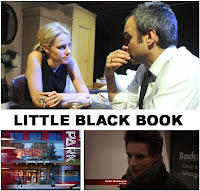 "You know...I had the most wonderful evening...I haven't read nothing about it,
...no idea what to expect and that blew me away. There was a scary pattern
about relationships at one point, and I leave a bit disconcerted."

Interesting article about Kate Fahy and Jonathan Price:
Jonathan Pryce:
'Why I walked out on my wife for another woman'
(Kate and Jonathan live together since 1974 and they
have three children, but they are not married)

Thanks to BespokeRedmayne for finding the video ( x )
I made the gif with GifSoup from the video.