Vivelamori, a nerd girl from Hong Kong  wrote a post in her blog about meeting Eddie Redmayne in the Penninsula Hotel before the BAFTA Academy Circle Event ( x ) I made a collage from the best photos she posted. 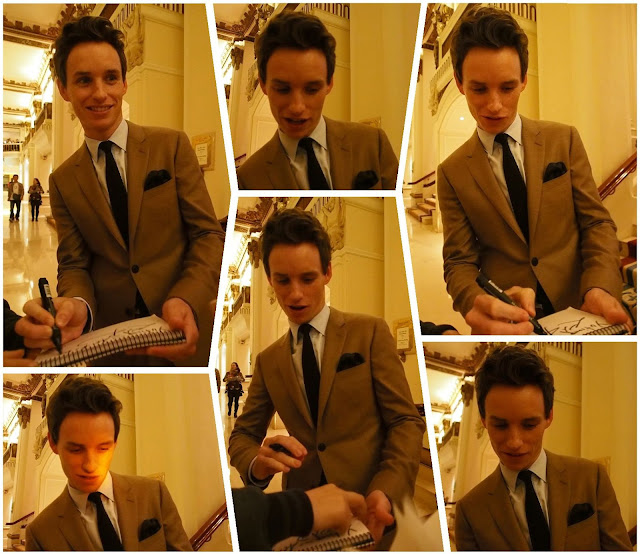 She wrote this:
Eddie Redmayne at Penninsula Hotel attending the Academy Circle of BAFTA event on 3 DEC,2013 (Tuesday)
My REPO of the first day of BATFA event in Hong Kong
I received the news that Eddie was coming to Hong Kong on that Saturday midnight and I just totally FREAKED OUT.
The news was so sudden and I had totally zero preparation.
I searched fans on the Weibo(China’s twitter) and so luckily I found 2 companions at last!!!!
We just knew the location but not the time. Before I tried to call the organizor, Catering and PR but failed. We guessed such an event won’t be started in the early morning so we went there at 1:30pm and waited.
We asked the receptionist and he kindly told us the timing. The event would be held at 6:30pm. We waited at the only pathway they would pass.
Not until 6:30, Eddie finally and suddenly shown up.
The first impression that came into my mind was that he was so lean and tall!! He must have been losing lots of weights for the Hawking movie…
BUT HAY HELL, EDDIE REDMANYE IS REALLY HANDSOME AND ADORABLE. We said Hello to Eddie and he was a little bit shocked that there were fans waiting him there but then he smiled profoundly.
We asked him “Could you sign for/take photos with us please?”
"Yeah sure!" he said. And we handed him our album/books/photos for him to sign, and took pictures with him, taking turns.

When I handed him the Les Mis Blu-ray Booklet for him to sign on his page, he joked, ” I looked angry in this picture.”
And I immediately said “No, you’re not. Your performance in it is really great. I love it very much. ” (Hell-yeah!!! I did it!! I successfully told him what I had been planning to say to him! YESSSSS)
He said, “Oh thank you, glad that you like it”
And when he signed me the Les Mis album, I asked could he also write my name on it.
He said sure and what was my name. I told him it’s Mori. He asked me how does it spell. I told him it’s M-O-R-I. He didn’t catch it and so he hunched over me to listen me saying again. His head was so near me.
DAMN. THIS. When he was signing, I told him and his companion ( BATFA’s ) that we’re so sorry to disturb them. She told us no, don’t say that.
OH YES, I touched his back when we’re taking photos, OH YES, I was so close to his chest.
When he had to leave, if my buddies didn’t remind me that we had prepared a card and a souvenir for him, I would have totally forget it Orz

When he showed up from nearly out of nowhere suddenly, all my little bunnies and butterflies were jumping and flying so violently in my stomach. We told him we got a present for you and he said, “Oh, for me!?” and happily thanked us.
Then he and his companion left and went for the event.
It was still like a fxxking dream for the 3 of us.
He is incredibly nice and adorable and when he talked to you, he looked into your eyes.
DAMN, this is too much (shouting in my brain)
My heart was gonna burst at that moment…GAWD… 
I updated my 3th December post with the six photos in the collage.

Email ThisBlogThis!Share to TwitterShare to FacebookShare to Pinterest
Labels: news